As Texas is such a large state, you can imagine that they have a large presence of military bases. As for the Army, there are 9 Army Bases in Texas that are currently in active status.

These bases all have a rich history, and they were founded in a variety of different years. For example, a few Army bases in Texas began during world war 2. Others started before that, providing support to world war 1 and the Spanish-American war.

Some Texas bases house Active army units, while others are serving as more of a historical site or National Guard training center.

Below, you will find a few key facts about each of the Army bases in Texas. If you’d like to learn more about nay specific base, feel free to visit their official sites (listed below).

Overall Mission: Fort Bliss works to support contingency operations while providing excellent support to their community, both military and civilian.

Overall Mission: Fort Hood works to provide the best facilities, programs, and infrastructures to train units for deployment, as well as to take care of soldiers and their families.

Overall Mission: This base works to sustain fight power for all military branches through ground combat and tactical systems sustainment.

Overall Mission: Camp Bowie was a widely-used training base around the time of the second world war. Today, it is still used for National Guard training purposes.

Overall Mission: Camp Mabry is a historical site due to its role of training and housing soldiers during the Spanish-American War and World War 2. Today, it serves as a training facility for National Guard units.

Overall Mission: Camp Swift is another base with a rich history that now serves as a training facility, mainly for Texas National Guard units. 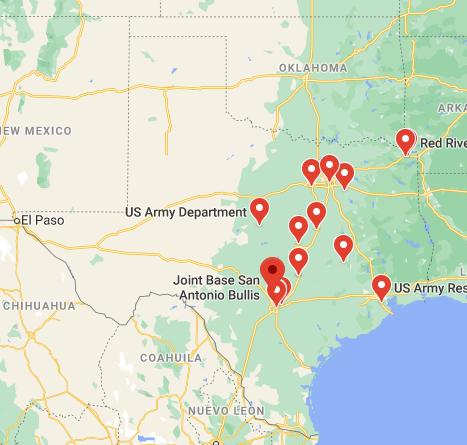 Texas is home to 9 active duty Army bases. Learn more about each TX Army base, including when it was founded, units stationed there, and more.