There are a total of ten active military bases in New Jersey. The US Marine Corps is the only branch of the military without an official base in the state, but has reserve units attached to other bases in the state.

Overall Mission: Fort Dix is the US Army segment of the Joint Base McGuire-Dix-Lakehurst.

The base is a joint facility between the US Army, US Navy, and US Air Force, but all five branches of the US Military have a presence on the Base.

It is a major training facility, and also a mobilization and deployment base for all the branches it serves.

Overall Mission: Picatinny Arsenal began life as the Picatinny Powder Depot, and has at various points been controlled by both the Army and US Navy.

It is a major research and manufacturing facility for both the Army and Navy.

It also produces weapons and armor.

It supports NORAD, the Eastern Air Defense Sector and other national security and safety operations.

It has supported active military operations, including Iraqi Freedom and Enduring Freedom.

Overall Mission: McGuire Air Force Base is the Air Force segment of the Joint Base McGuire–Dix–Lakehurst.

McGuire’s major operations are supporting eastward mobility, and is a major staging area for air operations heading to the east.

Every air mission for the past 15 years has been launched, in whole or in part, from Joint Base McGuire–Dix–Lakehurst.

Mcguire AFB also happens to be the largest military base in New Jersey.

To support this function, the base has a nearly three mile pier, which allows ships of any size to dock, and allows sufficient spacing for the safe loading and unloading of munitions.

Munitions for every currently active Navy ship are stored at the base.

Overall Mission: Naval Air Engineering Station Lakehurst is the Navy segment of the Joint Base McGuire–Dix–Lakehurst.

In their current role, they provide air support for naval operations.

They are also a training facility for Navy pilots, specializing in helicopters.

The station opened when Coast Guard Air Stations in Brooklyn and Cape May closed and were merged.

Their main role is providing 30 minute response to emergencies, including environmental incidents and search and rescue operations.

They also assist with law enforcement and border patrol operations.

They also perform other roles typically performed by the US Coast Guard, including law enforcement and environmental incident response.

USCG Station Manasquan is considered the smallest military base in New Jersey.

Overall Mission: There has been some form of US naval presence around Cape May, and specifically Sewell Point, the location of the Cape May Training center, since the Revolutionary war.

In 1917 the base was designated as a section base providing training, communication facilities, and other essential forms of support.

It is currently the home of the US Coast Guard Enlisted Corps, and is the only accession point and training center for enlisted Coast Guard personnel.

The station is in the process of being phased out, with many units currently using GPS instead of the LRNS. 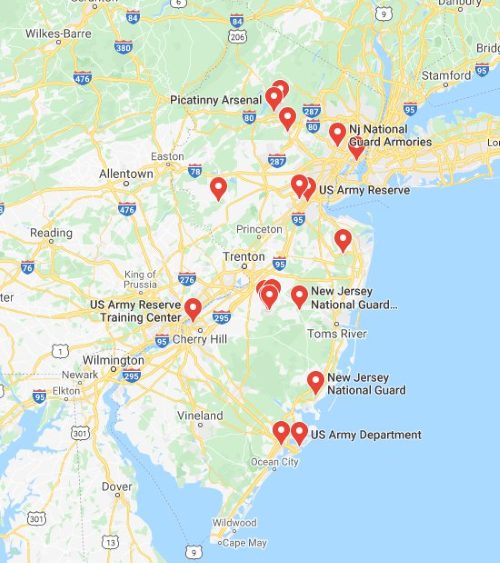 New Jersey is home to 10 major US military bases. They include bases for the Army, Navy, Air Force, Marines, and Coast Guard.