With its east coast location, Virginia is grounds to some of the most hisoric Army bases in the country.

Some of the bases saw the founding of the United States happen, while others began at other times, from the 1700s to the second world war.

Virginia is also unique because many of its Army bases are joint bases, meaning they are also used by other branches of the US military.

Below, you’ll find a brief rundown on all of the current and former army bases in the state of Virginia, along with links to their official websites in case you’d like to learn more:

The following bases in Virginia are still being used by the US Army today:

Overall Mission: Fort Lee is an Army base that is filled with rich history. Today, their main missions are in base operations and mission readiness.

Overall Mission: This joint branch base has a mission to secure its joint community, sustain installation of infrastructure, and support existing infrastructure partners.

Overall Mission: Fort AP Hill aims to provide “ready, prompt, and sustained land dominance across a full spectrum of conflict,” both as part of the US Army and as a part of a joint force when applicable.

As mentioned above, some bases in Virginia are no longer being used for Army purposes. One of the Army bases below is now a national monument, while the other two are being used by different branches of the US military:

Overall Mission:  Fort Monroe was built due to its excellent defense location, and later served as a Conferatre base, early artillery school, and lastly was home to the US Army Training and Doctrine Command before becoming a national monument in 2011.

Overall Mission: This former historic Army Base now serves as Joint Expeditionary Base Little Creek – Fort Story, a training base that is mainly used by the US Navy.

Overall Mission: This base started as Fort Eustis, an army base, and is now an Air Force base that aims to pay tribute to its Army founding and history. 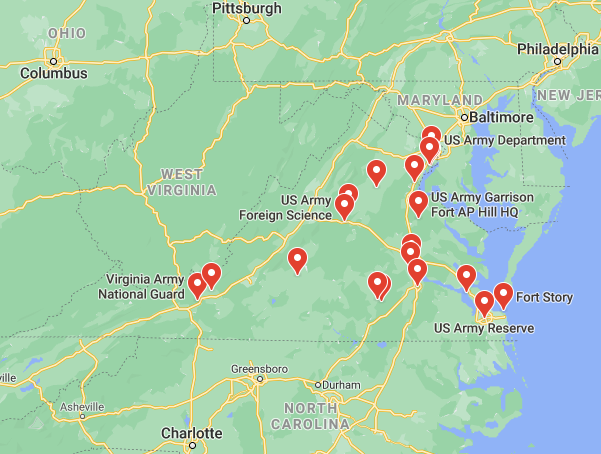 There are 5 active duty Army bases in Virginia, and 3 inactive bases. Learn more about each VA Army base, including when it was founded, their overall mission, and more.