When considering your career in the Army, it is vital to consider the Army promotion timeline when you plan.

Also, the Army has commissioned officers.

The Army bases some of its promotion criteria on time in service and time in pay grade.

However, the higher up the promotion rank, the more competitive promotions become.

An E-1 is the lowest rank in the Army. E-1 is the initial rank for those just coming out of basic training.

Also, to promote to an E-2, which is a private second-class, you need six months of service.

Afterward, promotion to an E-3, or private second class, happens after 12 months as an E-2.

Lastly, to continue to a Specialist (E-4), you will need two years of service and at least six months of time in pay grade.

There are three levels of Noncommissioned officers in the Army.

The lowest noncommissioned officer rank is a Corporal.

Also, you might notice that the E-4 designation for the Corporal is the same as the Specialist in the Junior Enlisted ranks.

However, even though these two have the same pay rank, they have different responsibilities.

A Specialist is known for having technical experience and knowledge.

However, a Corporal, despite being the lowest rank possible for a noncommissioned officer, is more about leadership.

Also, to qualify for a promotion to Corporal, you need 24 months in service, along with six months of time in grade.

However, your commander could waive the time in service to 18 months and time in grade down to three months.

Finally, you must have a security clearance that coincides with your MOS.

Advancement to a Sergeant is competitive in the Army.

Corporals and Specialists both compete for this promotion and must meet the following expectations:

A Staff Sergeant works closely with other sergeants on the development of soldiers in their section.

Candidates for Staff Sergeant must be eligible for promotion:

Senior noncommissioned officers have a higher level of responsibilities.

There are only three pay grades in this set of ranks.

Master Sergeant and First Sergeant share the grade of E-8, but they have different roles and responsibilities in the Army.

The Army changed how it promotes Senior NCOs last year.

With the new system, the Army conducts yearly reviews of the NCOs and uses a merit-based system to rate soldiers.

Also, the new rating system qualifies soldiers for promotion and depending on the needs of the Army, so those who have the best records are selected for promotion.

However, soldiers have access to their information in the Army Career Tracker, and they can share this information with a mentor if they wish to have help to plan their Army careers.

Lastly, this new system will be in place in the fiscal year of 2021, which begins this coming October.

Enlisted soldiers and college graduates, as well as those identified as commission candidates, must complete Officer Candidate School before receiving a commission.

Also, enlisted members must fulfill their time is service as well as time in grade.

Most soldiers start their officer career as a second lieutenant after completing the requirements mentioned above.

Also, there is a requirement of two years of time in grade.

Lastly, this promotion gets a bit more competitive, and performance since joining the military gets analyzed more closely.

Furthermore, you need three years of time in grade.

Also, this rank goes only to the best qualified, making it highly competitive.

Also, prepare for competition for this rank.

Army Promotion Timeline for Brigadier General and Above

There are four more grades to consider in your Army career.

Also, in all four of these cases, you will need to complete a full tour of joint duty with the Air Force, Marines, Navy, or Coast Guard.

There are likely additional questions as you plan for your career according to the Army promotion timeline.

Are There Opportunities for Accelerated Advancement?

For those who enter the Army, you might be eligible to enter with advanced rank. There is more than one path to earning this advanced rank.

Check with your recruiter, but if you participate in the following, you may find yourself leaving basic training as a private first class.

How Does the Point System Work?

The administrative points that help determine promotions include awards, decorations, both military and civilian education, and duty performance.

The duty performance points are awards from the unit commander.

A soldier needs to demonstrate they are trustworthy and dependable.

Knowledge and experience are essential in a soldier’s career. Also, they must demonstrate they can guide and teach others.

Soldiers up for promotion must demonstrate they possess the ability to guide and motivate others.

Promotable soldiers should carry themselves in a manner that shows confidence and attention to detail in how they dress in uniform.

A soldier ready for promotion should show proficiency in their area of expertise and can effectively communicate.

What Does the Promotion Board Consider?

The promotion board meets with soldiers and scores them based on personal appearance, the ability to communicate well, knowledge and awareness of both the military and world events, as well as their attitude.

Also, the members rate the soldiers as either average, above average, excellent, and outstanding.

The most points a board member can give is 150, which are added up and divided to an average score.

Afterward, these points add to the administrative points discussed above.

Therefore, the highest total is 850 points.

In the Army, the early ranks are more automatic.

Also, as you move along in rank and invest in your Army career, the subsequent ranks become more competitive.

Furthermore, soldiers have access to a mentor to help with planning and provide counseling on earning points based on education levels and other meritorious actions. 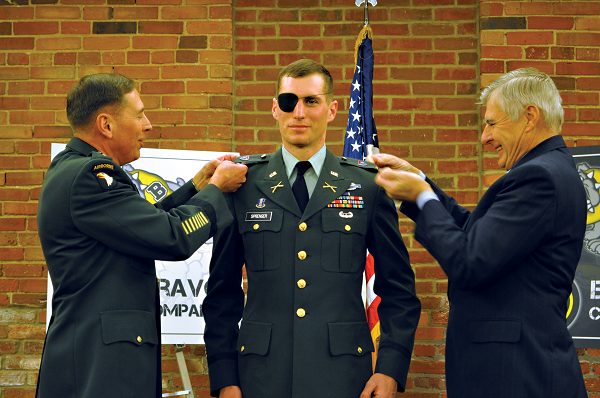 The promotion timeline for both enlisted and officers in the US Army can vary dramatically. Find out what the timeline is for both, as well as how to advance in rank faster.