The 15 Series MOS relates to aviation and transportation military specialties.

Learn more about each Military Occupational Specialty under Army 15 Series:

Jump To An MOS

An Aircraft Powerplant Repairer (MOS 15B) is responsible for inspecting and performing maintenance on aircraft turbine engines.

Aircraft Powerplant Repairers also supervise other personnel under their responsibilities as they progress through the ranks.

The U.S. Army depends heavily on airplanes and helicopters (perhaps more so than ever) which makes MOS 15B Repairer an important military specialty.

Aircraft Powerplant Repairers ensure that all working components are safe and ready for flight.

It helps to have a brain that is driven toward mechanical and working systems, however, the Army provides all the training you need assuming you meet the minimum ASVAB test score for MOS 15B.

There is a need to maintain the facilities for the storage of flammable and hazardous materials.

Click Here to learn more about what it takes to become an Aircraft Powertrain Repairer MOS 15B).

The military is becoming increasingly reliant on unmanned aerial vehicles to perform operations.

Aircraft Electricians are tremendously important in the United States Army.

These electricians guarantee that electrical systems on airplanes and helicopters are in top working order.

They also may supervise others in the military specialty as they get promoted in rank.

They rely on drawings, blueprints, manuals, and directives to make ordered repairs.

Aircraft Structural Repairers may alter windows and enclosures, or fabricate interiors with metal-forming techniques and fiberglass.

MOS 15G might also balance fixed-wing aircraft controls or apply a finish coat of paint to the exterior of the structure.

Pneudraulics are types of systems that use fluids made of both gas and liquid to operate machinery.

They test, repair, and remove pneudraulics systems to diagnose or troubleshoot problems.

Work hard and you can attain higher ranks which leads to supervision duties like other 15 Series MOS occupations.

These types of aircraft mechanics are also needed for fixing missile and fire control systems.

An OH-58D Armament/Electrical/Avionics Systems Repairer receives a lot of specialized training to excel at this unique military specialty.

An Aircraft Components Repair Supervisor manages a variety of fractions within 15 Series MOS.

These departments deal with aircraft components, aviation communications, and other maintenance issues.

In general, Aircraft Components Repair Supervisors have experience with several other military specialties under 15 Series MOS.

Furthermore, supervisors work with a budget and assigning orders for daily operations.

You can work your way up to MOS 15K Aircraft Components Repair Supervisor with the right work ethic and determination.

UH-1 Helicopter Repairers ensure the safety and preparation of flights.

Therefore, these mechanics service and lubricate aircraft and subsystems.

They also prepare aircraft for inspections and maintenance checks.

There are many parts of the UH-1 Helicopter that require inspection which makes MOS 15M Repairers masters of this particular type of aircraft.

Avionic Mechanics (MOS 15N) are responsible for a lot of pricey merchandise.

They also maintain the shop and manage stock when not doing inspections.

Click Here to learn more about what it takes to become an Avionic Mechanic (MOS 15N).

The Aviation Operations Specialist (MOS 15P) has a unique role within the U.S. Army.

The Specialist schedules and dispatches tactical aircraft missions for the military branch.

Consequently, they assist one of the largest fleets of aircraft in the world which adds invaluable experience to your job resume.

They confirm the accuracy of flight plans and coordinate accordingly to promote safe and efficient air travel.

An Air Traffic Control Operator (MOS 15Q) is about what you would expect compared to the civilian equivalent.

They track planes and present them with instructions for takeoff and landing.

Air Traffic Controllers operate from large towers that are usually placed directly over the airport.

The AH-64 Attack Helicopter is one of the most legendary within the U.S. Army.

Thus, you can expect an enjoyable and rewarding career fixing Apache helicopters for the military.

Though the U.S. Armed Forces are turning more to drones for aerial warfare, there are still hundreds of missions each year that take place with Apaches.

For this reason, your ability to maintain, diagnose, and fix components that need addressing is invaluable.

Another type of helicopter that the United States Army frequently uses is the OH-58D helicopter.

The type of helicopter is frequently referred to as the Kiowa Warrior and continues to serve the military branch in high capacity.

OH-58D Helicopter Repairers (MOS 15S) are very skilled mechanics that can diagnose and troubleshoot a variety of problems.

They frequently service and lubricate aircraft and subsystems to ensure full working order.

The UH-60 Helicopter is one of the most legendary in the entire Armed Forces.

The Black Hawk helicopter is such an iconic piece of aircraft that countless movies and books reference it.

Serving the Army as a UH-60 Helicopter Repairer (MOS 15T) is a rewarding opportunity.

They prepare aircraft for inspections and maintenance checks.

The CH-47 Helicopter Repairer (MOS 15U) has a crucial job responsibility like other types of helicopter repairmen.

The Chinook CH-47 Helicopter is necessary for many military operations.

They inspect assemblies like the engines, gearboxes, rotors, transmissions, and mechanical flight controls.

There is also a need to check aircraft wings, tail assemblies, and fuselages.

An Observation/Scout Helicopter Repairer (MOS 15V) is delegated with the responsibility of maintaining helicopters used for scouting.

There is still a need for observation/scout helicopters even though UAVs have become the primary means for reconnaissance work.

They assist in the diagnosis and troubleshooting of helicopters that need to return to the sky as soon as possible.

An Unmanned Aerial Vehicle Operator (MOS 15W) figures to represent one of the most important military specialties in the Army moving forward.

The U.S. government is opting to use unmanned aerial vehicles (UAVs) to replace the potential for human casualties when considering the best approach to a mission.

Therefore, Unmanned Aerial Vehicle Operators are critical to keeping these highly sophisticated types of machinery up in the air.

They plan and analyze flight missions with a crew before performing the operation of the UAV once it reaches the sky.

Additionally, they are responsible for launching and recovering the UAV from a runway.

Lastly, they perform light maintenance on certain parts of the unmanned aerial vehicle.

The AH-64A Armament/Electrical/Avionics Systems Repairer maintains the type of aircraft.

An AH-64A is a type of twin-engine attack aircraft with many different capabilities.

Furthermore, they maintain and authorize modifications to weapons and components.

There is also a need to maintain records of the weapon systems as well as perform preventative inspections.

An AH-64D Armament/Electrical/Avionic Systems Repairer (MOS 15Y) is also important and rounds out the list of 15 Series MOS occupations.

The AH-64D is another type of twin-engine attack aircraft, similar to the AH-64A aircraft.

The Senior Sergeant is in charge of aviation unit maintenance (AVUM), intermediate (AVIM), and depot maintenance.

Aircraft Maintenance Senior Sergeants handle a lot of paperwork as they make sure all the maintenance inspections and records are up to date.

They manage personnel and coordinate work schedules while checking in on repairers under their command.

The 15 Series MOS list of military occupations are critical to U.S. Army operations.

Army personnel that work in 15 Series MOS keep aircraft up and running.

They perform necessary safety checks and inspections, as well as repair broken parts.

You can learn more about each Military Occupational Specialty by contacting a local Army recruiter to make sure you meet minimum qualifications. 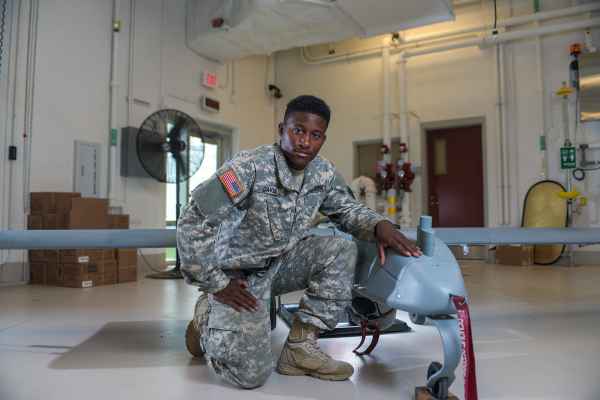 Learn more about 15 Series MOS, including detailed descriptions of each job in the series. The 15 series MOS field revolves around aviation and mechanical repair in the US Army.