The Army Reserves and Army National Guard each present unique opportunities to individuals who want to serve their country without making a full-time commitment.

Both the Reserves and National Guard allow individuals to work civilian jobs or attend school full time while serving in their MOS.

They allow you to work one weekend a month plus two weeks of training a year.

If they offer the same schedule and allow individuals to work near home, you may be wondering what exactly is the Army Reserves Vs. National Guard, and what is the difference?

Continue reading for more information on both, and 5 ways they are different.

What is the Army Reserve?

The Army Reserve is a component of the US Army.

The Army Reserve consists of mostly part-time soldiers who can be activated into full-time reserve positions in support of operations.

On the battlefield, being able to deploy combat-ready units as quickly as possible can make a large impact on the mission.

The Army Reserve holds fully deployable units and soldiers that may be activated to full-time duty to support specialized capabilities or replace soldiers in high demand areas who have been deployed.

Related Article – Military Reserves: Details on all 5 Branches of the Reserves

How big is the Army Reserve?

They are found in every state, five U.S. territories, and 30 countries for a total of 20% of the Army’s units.

The Army’s website lists over 200 occupations available to reserve members.

While the Army Reserve offers occupations and commands similar to its active duty counterpart, the Army Reserve has Theater engineer commands, Civil Affairs commands, and medical minimal care detachments that are distinct to reserves.

What do the Army Reserves do?

The Army Reserves is comprised of mostly part-time soldiers who complete the training and requirements specified by their MOS, while still holding a civilian job or attending school.

Reserves members work one weekend a month, completing drills, and two weeks a year for training.

Members generally attend drill near their home and receive benefits and pay from the Army.

They can be called upon to full-time reserves where they can be deployed or stationed in the U.S., depending on the needs of the Army.

Personnel in the Army Reserves can work in the majority of career fields that are open to enlisted members.

Job categories include administration, intelligence, and combat support, arts and media, legal and law enforcement, combat, mechanics, computers and technology, medical and emergency, construction and engineering, and transportation and aviation.

Related Article: Does The National Guard Pay For College?

What are their Responsibilities?

Army Reserves can be deployed as whole units and are known for quick mobilization.

Their vision is, “The most capable, combat-ready, and lethal Federal Reserve force in the history of the Nation.”

The Army Reserves provides the critical early entry and set the theater capabilities that are crucial to the nation’s defense and opening of major operations.

The Army reserve accounts for almost half of the Army’s total maneuver support and ultimately saves money.

Having part-time members who are fully skilled, capable and ready to deploy, cuts back on the need for active full-time employees and provides the ability to fill in gaps when needed, without being over-staffed.

What is their Command Structure?

Army Reserve is comprised of operational, functional, support and training commands that work together to provide a reserve fighting force.

Operational commands can be deployed as individual units, headquarters, or both.

They include units such as the 3rd Medical, 200th Military Police, 11th Aviation and more.

Functional commands can command units with similar capabilities and can deploy as units.

Training commands include units responsible for the training of all soldiers.

What is the Army National Guard?

The Army National Guard is part of the US Army and comprised of mostly part-time soldiers (called Guardsmen) who serve both the state and the country.

When most people think of the National Guard they think of assistance during natural disasters.

While this is true, the National Guard also serves their country and can be called into active duty to serve in their state or abroad.

How big is the National Guard?

The National Guard has a projected strength of over 340,000 soldiers.

They make up 39% of the Army’s Operational Force.

The National Guard is in every state, three territories, the District of Columbia and has over 150 career options.

Most career options are part-time but there are full-time and civilian employment opportunities in the National Guard.

What does the National Guard do?

Personnel in the National Guard assist in their home state in addition to meeting the needs of the country, serving locally and abroad.

Guardsman can be called upon by both the state governor and the President of the United States.

They respond to local emergencies and disasters, serve in overseas combat missions and assist in counter-drug operations and reconstruction missions.

Individuals work one weekend a month plus train two weeks a year.

National Guard members can hold a civilian job, stay close to their families, and complete drill near their home all while receiving Army pay and benefits.

The National Guard is seen as having more responsibilities than other forces because they answer to both the governor and the President.

Their responsibilities vary based on state and federal missions.

State missions are what they are most known for and are when Guardsmen help with their communities.

They assist with floods, fires, tornadoes, snowstorms, hurricanes, or any other domestic emergency.

The Guard still works to fulfill the military’s needs by being trained, equipped, and ready for mobilization whenever needed.

Guardsmen under the federal mission have an obligation to serve their country and may be deployed to any location that requires it.

Guardsmen are just as likely to be deployed locally as they are federally.

When in peacetime and under a state mission, Guardsmen answer to the leadership (generally the state governor) in their area.

They are considered the Commanders in Chief, of which the Adjutants General answers to.

When under a federal mission, each unit answers to the Combatant Commander in the theater they are operating under and the President is ultimately in command.

The Army Reserves and Army National Guard have quite a few similarities that can make it challenging to determine which is the best fit for you.

Below you will find five differences that can have an impact on your decision.

While both the Army Reserves and the Army National Guard can serve in deployment, the job responsibilities remain different.

This is because they are complete mobilized units and can be used in deployment areas, as additional support in fields that are in high demand when deployed, have careers unique to the reserves and they fill domestic positions when individuals are deployed.

The Army Reserves cannot be called upon by the state.

Although reserves members may help out with humanitarian efforts, their responsibilities do not include helping the state with natural disasters or other domestic emergencies like the National Guard can.

The National Guard works under the state and they can actually assist civilian police forces.

Because the National Guard serves dual-purpose, its command structure differs from the Army Reserves.

Both the Army Reserves and the Army National Guard have commands that include medical, legal, police, etc. and serve under the Department of Defense.

Army Reserves has fully deployable units that depending on the command, can deploy as units or headquarters.

The National Guard has similar command units, but their mission is different.

They have an obligation and mission to both the state and the federal government.

When considering whether to enter into the Army National Guard or Reserves, it is important to consider how promotions work.

Army Reserves members under Title 10 can be promoted to vacant positions that are federally available.

National Guard members under title 32 can only be promoted to vacant positions that are available within their jurisdiction, (state or territory).

Although the National Guard is larger than the Reserves your promotion opportunities may sometimes be limited.

Age is one eligibility difference.

Army Reserves is open to individuals between the ages of 17 and 34.

The National Guard is open to individuals between the ages of 17 and 35.

The above ages are for entering into each Army component respectfully, without prior service.

Another difference is the education requirement.

For juniors in high school, the National Guard has a program called Split Option Program that allows individuals to take Basic Training during the summer before senior year and then finish training after they complete high school.

Both the Army Reserves and the National Guard offer low-cost health insurance options through Tricare.

However, because the National Guard serves the state, there are additional opportunities for education tuition assistance and bonuses.

Some states offer tuition assistance opportunities that are unique to that state.

Also, because there are more positions and needs that are specific to that state, there could be more opportunities for recruiting bonuses that are not offered through the standard federal enlistment.

Check with a recruiter in your state to find more information on possible opportunities.

Related Article: 20 Best Jobs For Veterans With and Without A Degree

The Army Reserves and Army National Guard are two components of the Army.

Both offer part-time positions, allowing individuals to serve their country with as little time away from their family as possible.

The largest difference between the two lies with the command and jobs.

The National Guard answers to the state and federal government, while the Reserves does not.

Working in the National Guard may offer more jobs because it is larger than the Reserves, but promotions may be limited and the type of MOS you can enter into may be limited.

Whether you choose to enter into the Army Reserves or Army National Guard, you can be certain that you are providing a service to your country, gaining valuable skills and will be taken care of with benefits and retirement. 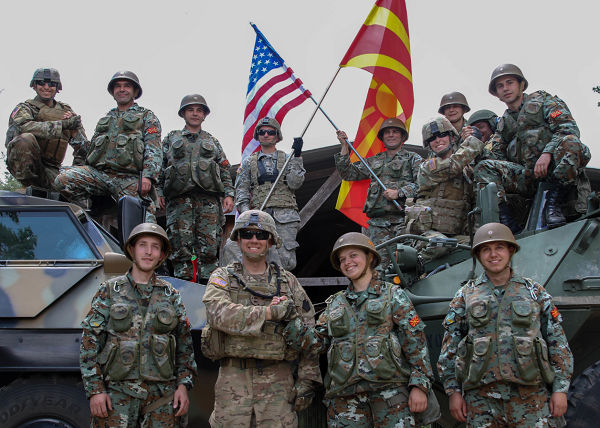 Learn more about the similarities and differences between the Army Reserves and Army National Guard, and find out which one is right for you.