Each Military Branch has terms/slang words that may not make sense to a civilian or a member of a different branch.

Military terms/slang originates for various reasons and changes throughout time.

Movies and TV shows may depict terminology that was used in World War II, that are no longer referenced anymore.

It can be hard to stay current with military slang, so OMK created a list of terms/slang that are new or established, but still used, found below.

1MC –  The overhead public address system on US Navy ships.

3rd Deck Dive Team- Mainly a Marine Corps term, meaning someone is suicidal and should dive off of the third deck.

5 Fingers of Death- Beef franks with beans served in some MRE’s. Named for the number and unpleasant taste

Related Article – What is a Navy Squid? 11 Slang Nicknames For Navy Sailors

As you were- Return to your previous task or posture

Bang Bang- Pistol or a Rifle

Barracks Rat- Personnel who stay in the barracks during downtime

Beans, Bullets and Band-Aids- Reference to supply items such a food, ammunition or medical supplies

BFT- Blue Force Tracker; Equipment that connects with a satellite to provide locations of units as well as maps and routes

Big Voice/Giant Voice- Term used to describe the loudspeaker system on a military base. It will often make a range of announcements, such as alerting soldiers of incoming attacks, the schedule of upcoming ordnance disposal explosions and when and where to take cover as an attack strikes. It also broadcasts Reveille and Retreat when in Garrison.

Black- When discussing amounts of something, it means you are almost out

Blue-on-Blue – Refers to an attack in which soldiers are unknowingly fighting against their own side, often ending up with injuries and even death

Blue-on-Green-  Similar to the ‘Blue-on-Blue’, this means your own forces are accidentally engaging forces friendly to your force.

BOLO- Usually an Army derogatory term for an individual who cannot perform a task or meet basic requirements; also can mean “be on the look out”

Bubblehead- Personnel in the submarine

CAB- (Army) Combat Action Badge; soldiers who perform in an infantry but do not have an infantry MOS

Chest Candy- Ribbons or Medals wore around the neck

CIB- (Army) Combat Infantryman’s Badge; Award for infantry who is under fire

COP- Small base in a combat area, combat outpost

Demilitarized Zone- Area that military forces and equipment are banned from

Dependa- Dependents of a military personnel

Detail- Referring to a usually unappealing task such as cleaning

Drive On- To keep going

Embed- Term for a reporter who is provided security, shelter and transportation by military personnel so they can observe and report on firsthand operations

ETS- Expiration Term of Service; the date a soldier completes their contract

Fart Sack- Sleeping Bag, or in some cases a mattress cover.

FOB- Forward operating base; a mid-size base with basic provisions

Fobber or Fobbit- Someone who does not the FOB

Fourth Point of Contact- Butt; term comes from a parachute drop in which the fourth point of contact is the butt.

Front Load- Being the first to complete a task

Galley- Kitchen on a ship

Gedunk- Snack Food that can be purchased, usually used by Navy on a ship

Glass House- An example of a target house for rehearse assaults

Groundhog Day- Referring to the movie by the same name, and the feeling that each day is the same during deployment

Head- Bathroom on a ship

High Speed- An individual who is highly motivated and at or near peak efficacy. Can be used sarcastically. Often includes “Low Drag”

Related Article –Hoorah Vs. Oorah Vs. Hooah Vs. Hooyah: What’s the difference?

JDAM- A bomb dropped from a U.S. aircraft

Knees in the Breeze- Airborne term for exiting an aircraft

Lands- Raised spiral surface in the bore of a weapon

Latrine Queen- (Air Force) Term for a trainee during basic training who is a team lead responsible for bathroom duty.

MRE- Meal Ready to Eat. A vacuum-sealed meal with a long shelf life

No-Go- Failure at a training station or job task

Oconus- Overseas; not in the continental U.S.

OPTEMPO- Operation Tempo; the pace at which one is working

POG- Person Other than Grunt. Anyone who’s not Infantry. In other words, if you ain’t Infantry you’re a POG

Pogey Bait- Food that the Army does not issue, but tastes good

Pond Water- The speed at which a slug / laggard is moving

Rack- Refers to a bed; soldiers ‘rack out’, meaning they go to sleep

Smoked- Physical punishment for some sort of infraction

Tango Mike- Thanks much

TIC- Troops in a contact fight; can relate to a firefight or IED

Voice in the Sky- Military base broadcast announcements

Wingnut-  WINGNUT comes from the shape of the Air Force E2 rank with single stripes, which looks like a wingnut.

Wire- Term referring to the base; a person is inside or outside the wire

Zone of Action- Small Section of the total tactical area

Zoomie- Anyone who operates a flying vehicle

Related Article –Platoon Size-How the US Army is Organized 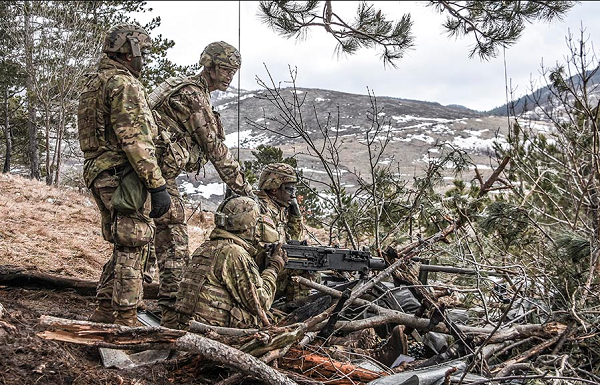 See our list of 194 of the most common military terms and slang in use today. Includes jargon and lingo for the Army, Marines, Navy, and Air Force.