Recruiting for the Army dates back to the Revolutionary war when the Continental Army sought out soldiers to fight, although there were no Army commercials back then.

While the draft eliminated some need for recruiting for just over three decades, the Army still recruited volunteers.

Since it is vital to keep up with technology, marketing, the Army invested in commercials encouraging qualified recruits to call their recruiter.

We went through some of the more compelling Army commercials for you to enjoy.

The beginning of this classic and vintage Army commercial begins with a young man climbing into a cockpit.

He appears very young, and you realize when the narrator begins speaking that the young man is straight out of high school.

In the background, you hear the classic ‘be all you can be…’ song, and the view is from the pilot’s advantage as he flies.

The narrator tells the audience that ‘Today’s Army has more pilots than the largest airlines.”

In the end, a clearly more established pilot congratulates the’ rookie’ pilot while the video shows the information for reaching a recruiter.

On a related note, the High School to Flight School program is still going on to this day, learn more about it here.

The beginning of the commercial is a little confusing.

At first, you think it is a football team waiting to run through the tunnel into the stadium because the narrator says, “Every team has a goal.”

However, you realize the light at the end of the tunnel is not to a stadium. Instead, the hatch opens into daylight, and soldiers rush out into the sunlight.

The narrator tells us, “…but only one team in the world has what it takes to succeed no matter what gets in their way.”

At the same time, a soldier releases this really cool tiny helicopter drone and uses it for recon while watching the landscape from a tablet.

With that information, the team moves forward while the U.S. Army logo appears on the screen with recruiter contact information.

The Army is known for the ‘Be All You Can Be’ slogan, and this throwback commercial from 1981 exemplifies the phrase.

The Army commercial begins with a senior class picture while the narrator talks about wanting opportunities.

Then, the commercial flashes to a soldier with his gear before flashing to training and graduating from Amry training.

From here, the video shows us several career paths the Army has to offer before settling on raising and saluting the flag, as well as a view of a pilot in his cockpit giving us the thumbs up.

One final moment is a mom walking toward the front door with pride evident in her expression as she hugs her son who is dressed in full dress uniform.

At this moment, the Army contact information is on the screen, and viewers are left with the idea that the Army has a lot to offer. Plus, I suspect everyone wants their mom hugging them with pride.

The ‘Army of One’ commercial begins with the view of a soldier looking through his rifle scope as the narrator asks, “what are you setting your sights on?”

Next, the video flashes to several soldiers are looking through either scopes or binoculars before the narrator asks, “…will you be ready?”

Next, the recruitment phone number is at the bottom of the screen while helicopters take off.

As the narrator encourages us to call, several different potential Army jobs pop up onscreen to attest to the variety of technical jobs recruits could select during recruitment.

The voice-over points out the phone call will receive a free DVD that explores the hundreds of potential jobs the Army offers.

As the commercial progresses, the video shots of soldiers doing their jobs flash quicker and fill up the screen, portraying the dizzying array of possibilities.

“Skills. Education. Healthcare,” the narrator points out while encouraging recruits to find their opportunity in the Army.

The ‘Army Strong’ commercial begins with some traditional military music, and the camera focuses on an Army uniform. Next, you see helicopters flying in formation before seeing a field with soldiers.

The narrator tells us that “There is strong, and then there is Army strong.”

At this moment, the commercial serves to remind viewers that a career in the Army may start at the beginning, but there is an upward trajectory as you put in your years.

The narrator reminds us that it is the inner strength of soldiers that makes the Army so strong.

“I am an American soldier, “he says at the beginning of the commercial.

Next, you see three soldiers together where one states, “I am a warrior and a member of a team.”

At this point, you realize you are witnessing soldiers saying the Soldier’s Creed all while performing their jobs.

This helps the audience understand that the Creed is not just something soldiers say; it is something they embody as they go about the business of being a soldier and doing their jobs.

As the video progresses, you see soldiers doing all sorts of jobs and enduring training. At one point, while in formation, the soldiers say, “…and live the Army values. I will never accept defeat. I will never quit.”

I like this commercial because of the variety of Army jobs shown and the use of technology, including drones.

The narrator tells us, “There is strong, and there is Army strong” at the commercial’s end.

Also, there is the encouragement to find out if we have what it takes before giving us the Army website.

The ‘Who Will Build Tomorrow’ commercial is very high-tech and cool.

The Army commercial begins with the title on the screen with a dark background and what seems like sparks floating up.

Next, you see a soldier standing and being digitally recreated and strengthened as though she were in a video game.

The words ‘The Code Fighter’ come onto the screen as she bows up and flexes forward, causing a digital explosion.

Next, someone in a lab coat and a mask is holding a ball of fire, and the words ‘The Virus Hunter’ are on the screen.

At this point, it feels as though it is a video game, and we are picking avatars.

Another soldier appears, and she shoots fire or a current upwards, and her title is ‘The Wavelength.’

Next, you have ‘The Replenisher,’ ‘The Ground Breaker,’ before the final shot of “Life-Defining Careers Start Here.”

As this fantastic video ends, you see the Army website to visit for more information.

This Army commercial starts out quiet. First, you see the words “This is a key” while the camera pans to the right and centers on an Army uniform. At this point, you notice the music welling in the background.

Next, you see a group of soldiers together as the words “It’s an acceptance letter” appear.

The following few clips are of soldiers helping each other up, coming together, and building camaraderie.

Then, some of the words from “It’s an acceptance letter” fade away, leaving just the word ‘acceptance.’ At this point, you realize this is not just about having an extraordinary Army job and being exceptional. Being a soldier is about being a part of something greater than just one person.

Next, as two helicopters take off over a fantastic view, you see ‘It’s a passport.”

The commercial continues and shows soldiers doing work that is meaningful and contributing to the greater good—for instance, working in a lab, gearing up for combat, and piloting a helicopter.

Throughout the entire commercial, though, it is clear this video is about belonging.

The ‘What’s Your Warrior’ video starts very high-tech. You have a group of soldiers with one of them facing you. As the camera pans closer, he puts down his visor, and the visor becomes a screen where you have a helicopter pilot’s view from the cockpit.

The video plays like a video game as you fly through mountains, dodge explosions, and fly out through a mountain pass.

One explosion morphs into this nuclear reaction situation with the words ‘split cells’ on the screen before seeing a soldier working in a lab.

The next transition is the best of them all. The camera shifts, and the image turns into threads that begin to take the shape of a sniper in hiding. This transition starts at the 19-second mark, so don’t miss it.

As the camera pans out again, it raises, and you see hands on a keyboard before morphing yet again.

Finally, you see the words, “Command the tools of tomorrow. Turn a global challenge into your daily mission.”

This Army commercial begins with a soldier discussing the reasons he did not become a soldier. It was not to become famous or to join a winning team.

The soldier tells us it was “…because there is important work to bed one and only some able to do it.”

During these words, you see soldiers doing both humanitarian works and in combat.

As the narrator tells listeners about the skill level of other soldiers, the video flashes to soldiers carrying out the mission of their work.

He tells us that the team consists of “doctors, lawyers, engineers…” and tells us that all these soldiers come together to be a part of the team.

In the end, the narrator tells us is that these soldiers will one day say the same thing. They took on the mantle of responsibility to “make a difference in this world.” 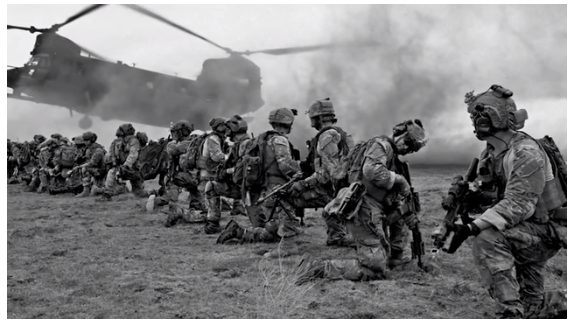 See OMK's list of the 10 best Army recruiting commercials of all time, including ads like 'Be All You Can Be', 'Army Of One', 'Army Strong', and more.