Military balls are steeped in traditions, and if you are not in the know, some of what you see and experience could feel confusing.

Some traditions date back to the Revolutionary War, and they vary depending on the military branch.

Also, it is vital to remember while each branch may have the main ball, these celebrations of the military community take place all over at or near military bases all over the world.

Because these celebrations are so important and full of traditions, it is essential to understand proper etiquette and dress before attending fully.

Every military branch has a slightly different schedule for its military ball because the traditions differ.

Although, many of the traditional events are similar in nature.

Also, each branch has a different day on which they celebrate.

Therefore, the Army’s military ball occurs on June 14 of each year as a birthday celebration.

However, even though the Army ball is on its birthday, it is essential to know this event serves to celebrate those who have died serving the Army and build the morale of new soldiers.

The Army ball has the main event, but the Army celebrates locally all over the world.

You can expect to see civilian men in formal black ties and service members in their full-service dress uniforms.

On October 13 in 1775, the Continental Army established the Navy when the United States needed warships to help during the Revolutionary War.

Every year on this day, the Navy celebrates with the Navy ball, and the Navy League of the United States hosts the event.

Although you cannot attend the main ball, know that Navy installations worldwide have local events.

The Navy uses the ball as an opportunity to honor the Navy’s inception and show appreciation of Navy culture and heritage.

The Marine Corps ball is a celebration of the founding of the United States Marine Corps.

The Marines got their start in 1775 when the Continental Army realized it needed to intercept ammunition coming in from Britain during the Revolutionary War.

The resolution on November 10th became the creating of the Marine Corps.

The main Marine ball is often known as the Commandant’s Ball, but Marine installations will host local Marine balls.

The first Marine ball occurred in 1925 in Philadelphia.

The Air Force got its start on September 18, 1947, and while the annual ball is not necessarily on that day every year, Air Force installations worldwide celebrate with a formal ball.

Since the local balls’ responsibility falls on the Air Force Association to coordinate, your local base may alternate years to hold the ball in some areas.

Everyone, regardless of rank, is invited, as is local civilian leadership as an opportunity to build and celebrate community relationships.

Like other military branches, the Coast Guard celebrates its heritage annually with a formal military ball.

The galas happen worldwide and include local civilian leaders to build connections with the local communities.

The Coast Guard began on August 4th, 1790, because of Alexander Hamilton’s authorization.

While the Coast Guard does not have its ball every year on the same day, it still has a yearly ball to celebrate both their communities and heritage.

We address frequently asked questions regarding military balls below.

1. Who gets invited to military balls?

A military ball is an opportunity to bring everyone together to celebrate their service and to have some fun at the same time.

Those who serve in the military receive an invite, and each service member may bring one guest.

Also, the guest can be a date, a spouse, or a girlfriend/boyfriend.

In some cases, local community leaders receive an invite, as well.

2. Is it mandatory to attend Military Balls?

Attendance to the balls may or not be mandatory.

For instance, spouses have no obligation to attend, but some service members are strongly encouraged to attend.

Also, some military branches will require the attendance of the service members even if they do not have a date for the evening.

Also, there are longer dresses for class A uniforms for formal events, and in some cases, women can wear pants as their class A, which speaks of inclusivity.

A military ball is a formal event, and dresses are formal length, which is often to the floor, although more recently, the length of dresses can go to the knees or just below.

Most formal attire includes darker colors, but feel free to have a pop of color in your formal dress. However, still, be mindful of the formality of the event and do not overdo it.

Also, be conscious of how much skin is showing. Generally speaking, some skin is fine, but too much can take you out of the realm of formal attire rather quickly.

Stay away from prom dresses and stick with the formal section when you shop.

Since you can expect dancing, shoes are an essential consideration.

Discussions with women with experience attending balls report going for comfort first while still keeping it classy. Although it is worth noting, many women opt for longer dresses to hide less formal shoes.

If you are wearing gloves as part of your formal attire, remember to remove your right glove and hold it in your left hand when you meet people and shake hands. Furthermore, ensure your hands are clean and well-kept.

Men who are guests wear formal attire with darker suits or tuxedos.

4. What about hair and makeup?

Since military balls are formal affairs, do not neglect hair and makeup.

Evening makeup and hair tend to go a little more dramatic, but a formal updo and professional makeup are not required.

Many women stick with well-groomed and subtle at formal events.

One point to remember is there are formal photographs at military balls, so women often gear their makeup to look their best in the photo.

5. What can you expect to see?

While every military branch has different traditions, some events at a military ball are standard.

For instance, you can expect a receiving line. Usually, the first person you meet is the one being honored. As you move through the line, you shake hands and make introductions.

Try not to get too chatty during the receiving line, as there are plenty of people behind you working through the line.

Consider dropping personal items off at your table before going through the line to avoid the awkwardness of full hands.

There is usually a social hour before the formalities begin. The social hour is an opportunity to visit with those at your table and others in attendance.

Another common occurrence at a military ball is alcohol.

Expect to see people drinking, and try to remember to balance your own alcohol intake with consuming food because you are a representative of either a service member or the military if you are in the service.

As you balance food and alcohol, remember that dinner is often served later in the evening after the formal events unfold. Many embarrassing military ball stories begin with a pre-ball party without food.

One tradition you are sure to see is the flag coming in and the National Anthem. Be sure to stand and participate in the flag procession. Also, do not leave the room during these formalities if you can avoid it.

When in doubt, pay attention to what others do. For instance, if people begin to stand, this is an excellent time for you to get on your feet.

Also, military balls have keynote speakers, and it is customary to remain silent during their speech delivery.

You may also notice a fallen soldier’s table at a military ball, as one is customary out of respect.

After the formalities and dinner, you can expect a beautiful birthday cake since the event often celebrates the military branches’ birthdays.

Every year, the military branches host a formal gala referred to as a military ball.

In some cases, the balls are to celebrate the branch’s birthday, but not always.

In all cases, the ball is an opportunity for service members to honor and celebrate their military heritage.

Also, in other cases, the ball will include local civilian leaders.

The military balls are formal events with traditions observed each year.

Attendance at military balls is mandatory in some cases, and those who attend must be mindful of the dress code expectations.

During the ball, guests and service members observe traditions such as a receiving line, social time, observance of the flag, and honoring fallen heroes.

For sure, those in attendance have a great time while building community relationships. 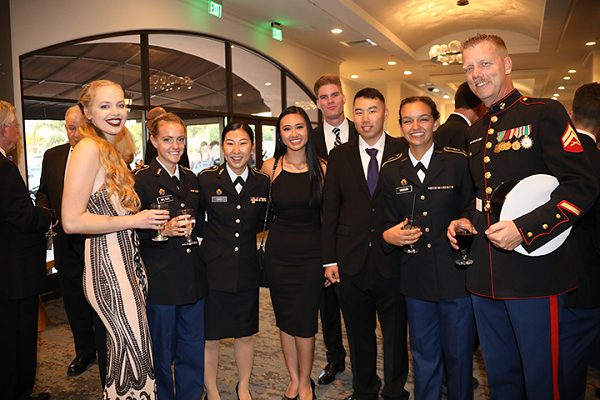 Learn more about what to expect at the Marine Corps, Navy, Air Force, Army, and Coast Guard balls, including what to wear / how to dress, how to act, what to expect, and more.