‘Full Metal Jacket’ is one of the most iconic military films of all-time.

It’s evident by the amount of people (both military and civilian) that can recite the best ‘Full Metal Jacket’ quotes.

The 1987 war drama was a huge success for Stanley Kubrick and is often ranked among his top films.

Kubrick, who also co-wrote the screenplay, based the story line around a platoon of U.S. Marines surviving boot camp and, later, Vietnam.

There are so many memorable lines in the script that its difficult to narrow down the best ‘Full Metal Jacket’ quotes.

Warning!! Some of the content below is not suitable for readers under the age of 18. Reader discretion is advised.

‘Full Metal Jacket’ is often attributed among the best films ever made in Hollywood.

It was shot by legendary filmmaker Stanley Kubrick and earned an Academy Award for “Best Adapted Screenplay”.

‘Full Metal Jacket’ splits time in the film between the first half (during basic training at Parris Island, SC) and the second half (Tet Offensive, Vietnam).

Nonetheless, we attempted to narrow a list down to the 15 Best ‘Full Metal Jacket’ Quotes.

#15. Gunnery Sergeant Hartman: “If you ladies leave my island, if you survive recruit training, you will be a weapon. You will be a minister of death praying for war. But until that day, you are pukes. You are the lowest form of life on Earth.”

He provides so many memorable lines that you could easily make an entire list dedicated to his best ‘Full Metal Jacket’ quotes.

This one, is near the beginning as Sgt. Hartman introduces the new recruits to Parris Island.

Private Joker will narrate about the island “an 8-week college for the phony tough and the crazy brave.”

#14. Gunnery Sergeant Hartman: “Because I am hard, you will not like me. But the more you hate me, the more you will learn. I am hard but I am fair. There is no racial bigotry here…Here you are all equally worthless.”

Another famous quote from Gunnery Sgt. Hartman during boot camp for the U.S. Marines.

Director Stanley Kubrick did an excellent job of displaying the challenges that Marine recruits face at basic training.

While the drill instructors are extremely rigid and relentless, there is a point behind the madness of boot camp.

Thus, the Marine Corps breaks recruits down before they build them back up.

You can watch the whole clip below:

#13. Gunnery Sergeant Hartman: “I bet they regret that. You’re so ugly you could be a modern art masterpiece! What’s your name fat body?”

It’s clear that Sergeant Hartman is not a fan of new recruit Pyle from the beginning.

Hartman is clearly displeased that the recruit arrived to basic training overweight.

It’s a critical lesson for new recruits that do not want to immediate receive the attention of a drill sergeant, but in a bad way.

The conversation between Private Joker and Private Gomer Pyle explains the basis behind the “full metal jacket”.

Full metal jacket is a common type of ammo utilized during range training.

The conversation not only leads to the title of the film but serves as imagery for what is to proceed in the story.

The line is especially memorable during a conversation Private Joker has with another Marine.

The two are discussing the causalities of war, including the number of women and children.

During which, the Door Gunner admits that his number of confirmed kills includes civilians.

Vietnam was an especially bloody and brutal war that was widely unpopular back home in the United States.

Stanley Kubrick documented the horrors of war including the good, the bad, and ugly.

Watch the full clip below:

#10. Gunnery Sergeant Hartman: “Holy dog shit! Texas? Only steers and queers come from Texas, Private Cowboy, and you don’t look much like a steer to me.”

The humorous response is from Sgt. Hartman during boot camp where he interacts with Private Cowboy.

It’s a funny line to quote for friends and foes from the Long Horn State that are often proud of their origins.

Moreover, the line explains how drill instructors commonly use tactics during boot camp to break down your esteem.

It’s designed to test if you have the mental fortitude to endure the rigors of the U.S. Armed Forces.

#9. Gunnery Sergeant Hartman: “God has a hard-on for Marines because we kill everything we see! He plays His games, we play ours! To show our appreciation for so much power, we keep heaven packed with fresh souls! God was here before the Marine Corps! So you can give your heart to Jesus, but your ass belongs to the Corps!”

There are many religious elements sprinkled in during basic training usually to comedic effect.

For example, in this scene Hartman connects the U.S. Marines to God.

It’s usually considered one of the best ‘Full Metal Jacket’ quotes for Marines that are proud of their military branch.

#8. Gunnery Sergeant Hartman: “Today, you people are no longer maggots. Today, you are Marines. You’re part of a brotherhood. From now on until the day you die, wherever you are, every Marine is your brother.”

The quote from Hartman outlines another important tenant of the United States Marine Corps – brotherhood.

The military branch takes its tradition very seriously including the fraternity you enter once you become a Marine.

Thus, the element of a brotherhood is very important to personnel that are sworn into duty to protect their fellow Marines.

#7. Gunnery Sergeant Hartman: “The deadliest weapon in the world is a Marine and his rifle. It is your killer instinct which must be harnessed if you expect to survive in combat. Your rifle is only a tool. It is a hard heart that kills. If your killer instincts are not clean and strong you will hesitate at the moment of truth. You will not kill.”

Another important lesson you learn in the U.S. Marines is that “every Marine is a rifleman”.

The principle dates back to the conception of the military branch.

U.S. Marine basic training is unique in that every recruit learns marksmanship skills, regardless of military career.

The comment is made during an exchange in ‘Full Metal Jacket’ where Gunnery Sgt. Hartman interacts with a series of recruits.

Hartman relays the words like a prayer ritual as the recruits chant back in observance.

The chant continues with strongly held statement “my rifle and myself are defenders of my country” and “until there is no enemy, but peace”.

Watch the full clip below:

#5. Crazy Earl: “These are great days we’re living, bros. We are jolly green giants, walking the Earth with guns. These people we wasted here today are the finest human beings we will ever know. After we rotate back to the world, we’re gonna miss not having anyone around that’s worth shooting.”

The comment is made by Crazy Earl who becomes more prominent in ‘Full Metal Jacket’ once the film transitions into Vietnam.

Crazy Early is referring to the U.S. Marines when he mentions “jolly green giants walking the Earth with guns”.

The dialogue reflects much of the dark humor combat personnel exchange while in duty.

Private Joker, another common source of the best ‘Full Metal Jacket’ quotes of all-time, makes another defiant statement about the USMC.

Later, as the movie and story evolves, Private Joker becomes far more committed to the cause of the Marines.

The words are echoed later by Rafterman when he proudly claims “When the s**t really hits the fan, who do they call? They call Mother Green and her killing machine!”

#3. Private Joker: “The dead know only one thing: it is better to be alive.”

The statement seems general and straightforward yet foreshadows the fate of Private Joker.

By now, Private Joker is completely invested in the Tet Offensive and achieving confirmed kills.

The second half of ‘Full Metal Jacket’ reveals many of the dark aspects of war.

Check out the full clip below:

The dialogue by Private Cowboy is partly humorous and partly sad reality.

‘Full Metal Jacket’ does an outstanding job of portraying the different personalities and mindsets of Vietnam.

For example, the opinion of Private Cowboy contradicts what Donlon thinks of the place:

“I mean, we’re getting killed for these people and they don’t even appreciate it. They think it’s a big joke.”

Meanwhile, Animal Mother has a simple solution to what he thinks about America’s involvement in Vietnam:

“Well, I think we should win.”

The last words of Private Joker resonate with a dark and powerful film.

The voice-over drifts through the film as the final moments are captured and culminate an unpopular war.

There are so many outstanding quotes that we could have included several other memorable lines.

What do you consider the best ‘Full Metal Jacket’ quotes? Leave a comment below! 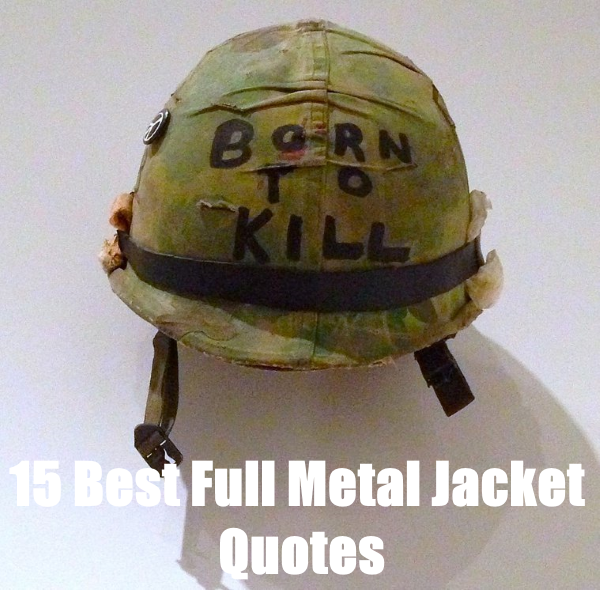 The best 'Full Metal Jacket' quotes are from classic characters in the film like Sgt. Hartman and Private Joker. We reveal our favorites.