Puller is responsible for leading Marines and some incredibly bloody battles during World War II.

Also, Puller was involved in four campaigns during World War II and is one of the most decorated Marine in history.

Furthermore, he won the Navy Cross five times for his acts of heroism.

We have compiled but 20 best Chesty Puller quotes known to Marines.

20. “I’ve always believed that no officer’s life, regardless of rank, is of such great value to his country that he should seek safety in the rear…officers should be forward with their men at the point of impact.”

This quote is a famous Chesty Puller quote because Puller was known to lead by example.

He didn’t hold himself above his man, and he walked and worked along with his marines.

Therefore, Puller did not take advantage of the comforts afforded him due to his rank.

Instead, he held his own. Because of this, he is well known and by his men.

Chesty’s military career began in Haiti, and it did not take long for him to become a senior officer.

By the time of Chesty’s retirement, he became the second most decorated Marine in history.

17. “The safest place in Korea was right behind a platoon of Marines. Lord, how they could fight. The Reds told us they were afraid to tangle with the Marines and avoided them when they could be located.”

Chesty grew up hearing stories of military service, and he wanted to join the Army originally. Since he was a minor at the time and his mother would not approve, he could not join until later.

Chesty joined the Marines during World War I, and he wanted to be in military combat.

15. “We’ve been looking for the enemy for some time now. We’ve finally found him. We’re surrounded. That simplifies the problem.”

Chesty eventually made it through Officer Training and it was not until he received orders to go to Haiti that he was able to see combat.

14. “Great. Now we can shoot at those bastards from every direction.”

He quickly proved himself as a bold Marine, and even showed up after his patrol with severed heads of the enemy.

13. “In the Marine Corps, your buddy is not only your classmate or fellow officer, but he is also the Marine under your command. If you don’t prepare yourself to properly train him, lead him and support him…then you’re going to let him down. That is unforgivable in the Marine Corps.

Puller was a stickler for discipline and maintaining equipment. Also, he believed in respecting all Marines.

12. “Pain is weakness leaving the body.”

It is because of the level of respect he had for his troops he saw so much success. The Marines he led knew he would walk with them and fight with them. He earned respect, and this is considered one of the more inspirational quotes from Chesty Puller.

11. “Old Breed? New Breed? There’s not a damn bit of difference as long as it’s the Marine breed.”

Chesty Puller is so famous among Marines that they still say at the end of the day during boot camp “Good night, Chesty, wherever you are.”

10. “The mail service has been excellent out here, and in my opinion this is all that the Air Force has accomplished during the war.”

Puller earned his third Navy Cross award for his actions on October 24, 1942. Chesty managed to hold off the Japanese long enough for reinforcement to show up. Then, he commanded those reinforcements until the next day and saved countless lives.

Puller got the nickname ‘Chesty’ because of the size of his chest. There is a legend still circulating that Chesty took a bullet to the chest and surgeons had to put in a steel plate.

8. “I’ll take care of my men first. Frozen troops can’t fight. If we run out of ammunition, we’ll go to the bayonet”

Puller earned the rank of Brigadier General in 1951 before becoming a Major General a couple of years later.

Puller left the service due to health reasons in 1955, but he asked to return during Vietnam. He was denied this request.

6. “Those days in the woods saved my life many a time in combat.”

Even though his time in the service ended, Chesty Puller still has an imprint on the Corps. It is because of his impact that he is a legend and there are so many Chesty Puller quotes.

5. “Son, when the Marine Corps wants you to have a wife, you will be issued one.”

His unique leadership style means he continues to be well-respected by Marines of all ranks.

4. “Paperwork will ruin any military force.”

Puller often refused the comforts afforded Marines of his rank.

3. “If you want to get the most out of your men, give them a break! Don’t make them work completely in the dark. If you do, they won’t do a bit more than they have to. But if they comprehend, they’ll work like mad.

In fact, he was known to march and bunk with his men. He is known to have spoken ill of those who ‘pulled rank’ to get respect.

2. “We make generals today on the basis of their ability to write a damned letter. Those kinds of men can’t get us ready for war.”

Furthermore, Puller did not put up with politics within the service and spared no one his straightforward thoughts.

Chesty Puller died in 1971 when he was 73 years old, and he is buried in Virginia. 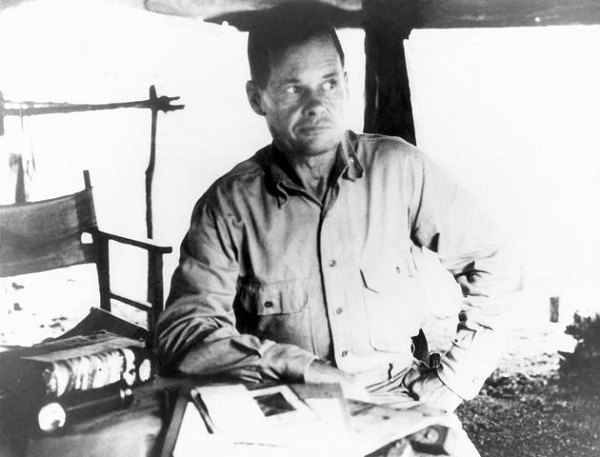 Chesty Puller is easily considered one of the most famous US Marines. See some of his most famous quotes of all time here.