Military basic training is either nerve-wrecking or thrilling depending on how you pursue it.

As a result, it helps to understand the guidelines established for basic training showers, food, and haircuts.

Basic training varies slightly depending on the military branch yet all camps exhibit the same mindset: “break you as a person; build you as soldier”.

Consequently, military basic training is an initial culture shock yet most find the living standards not as horrible as anticipated.

Therefore, preparation is critical to surviving basic training and advancing to a military career.

Learn more about the expectations for military basic training showers, food, and haircuts.

Related Article – How Hard Is Basic Training In The Military?

There are a lot of unwarranted fears with new recruits in terms of the shower situation.

In general, many want to understand the degree of privacy they’ll have in the military.

While group/public showers do exist in the military there are other situations where a private bay with a curtain is granted.

Nevertheless, new recruits need to eventually get accustomed to the process of sharing a public shower.

In the military barracks, everything is communal including the personal space for hygiene.

Thus, recruits often shower together with a unit and are also expected to keep the shower “clean, dry, and ready for inspection”.

Often, drill commanders assign when and how long a unit has to shower.

For example, you may have 1-2 minutes to squeeze in a quick shower in the morning after PT.

Then, more time is generally provided in the evening right before or after “lights out”.

In the evening, recruits traditionally have a longer amount of time to bathe and take care of personal hygiene.

Regardless, keep in mind that shower heads are generally limited at basic training and no one likes someone that hogs a bay.

Finally, while most hygiene guidelines are universal across military branches, there is some flexibility with drill instructors.

For example, a new training unit may endure a “shower drill” where they only earn precious seconds in the shower before another recruit is ordered into the water.

It’s common in military branches like the Marine Corps where everything the first couple of weeks in basic training is spent doing “by the numbers”.

The best advice is to make personal hygiene a priority but find methods to clean and rinse effectively.

It will allow you to maximize time when adjusting to the rigorous of basic training showers.

You’ll be in such a rush to get clean that you’ll hardly notice the public shower element of basic training.

Food is served in basic training at the cafeteria, otherwise affectionately known as the “chow hall” or “mess hall” (depending on branch).

The general consensus is that chow halls are not nearly as bad as some recruits might infer.

Yes, it may not represent your mother’s home cooking but most recruits find the food situation more than adequate.

Military basic training provides a wide variety of food for recruits that need to refuel from the demands of PT.

Even better, standard military procedure now makes it mandatory to allow recruits at least 10 minutes to finish their meals.

Furthermore, military personnel are no longer expected to finish everything on their plate (or get punished).

It’s a tremendous upgrade from the previous control drill instructors had over training recruits in terms of allowing access to food.

Notwithstanding, just like basic training showers, it’s wise not to waste too much time in the mess hall.

Recruits typically only receive 10-15 minutes to finish their courses yet are guaranteed 3 meals per day.

Regardless, make sure not to confuse the chow hall with social hour.

It’s best to keep your face down, focus on eating, and refuel for the next exercise.

Military branches often place some restrictions on recruits such as not being allowed access to soda, snacks, or sweets.

Be that as it may, most recruits agree that food in the military is not that bad.

Military personnel generally enjoy their meals much more once they complete basic training.

There are several other resourceful tips for how to maximize your time in the mess hall.

For example, make every bite you can into a sandwich (quicker way to consume) and incorporate bread, meat, and brown rice as much as possible into a diet.

You should focus on what is going to give you the energy you need without going to the barracks hungry at night.

Lastly, avoid snacking in advance of basic training because its a bad habit that you’ll not have access to in the military.

Haircuts are another crucial element of boot camp along with basic training showers and food.

In a regard, the first haircut is like a rite of passage for new recruits.

For this reason, one of the first tasks is to get a haircut upon arrival at basic training.

However, with that being said, make sure not to arrive to boot camp with a shaved head in advance.

You’ll actually be targeted by the drill instructor and should rather accept the trim as part of the acclimation into the military.

In fact, military personnel can generally determine how long someone has been in basic training by the length of their hair.

For example, a first-week recruit will look bald while a recruit that is preparing to graduate from basic training will likely have an inch of hair.

Once you endure your first shave, hair standards remain strict by branch, yet still provide much more freedom than during basic training.

Thus, you can expect a haircut at least once per week yet not nearly as much taken off as the first trim.

Of course, everything is entirely different for female recruits.

Women are not required to get a haircut unless they serve in the U.S. Navy.

In fact, many advise that women get a professional cut beforehand because they will likely not be happy with the one the military provides.

Nevertheless, women have separate guidelines they must follow with their hair in order to serve in uniform.

And, since recruits are in uniform at all times, it’s especially important to make yourself aware of expectations during basic training.

Female recruits are expect to wear their hair in such a manner that the hair does not protrude past the bottom of the collar (and not below the eyebrows).

Additionally, women must tie bangs that are grown out long enough into a bun.

The guidelines may vary slightly by military branch yet remain similar after basic training is completed.

In general, the U.S. Army and Marine Corps are considered to have the strictest restrictions for haircuts.

Meanwhile, the U.S. Air Force and U.S. Navy are considered fairly lenient (especially for women) in terms of hair regulations after basic training.

The U.S. Armed Forces places other regulations on appearance such as uniform standards.

Moreover, new recruits should also consider the tattoo and piercing policies of each military branch.

Are you considering joining the military?

There is a lot of pride and honor to take from serving in uniform and represent the United States.

Basic training is your introduction into the lifestyle and culture of the U.S. Armed Forces.

While the regulations may vary based on military branch, there are expectations placed on appearance.

Thus, it’s important to make yourself aware of basic training showers, food, and haircuts before arrival.

It will give you an edge over other recruits that may not have as informed or prepared to survive basic training.

Now, the next step is determining which branch of the military is best for you! 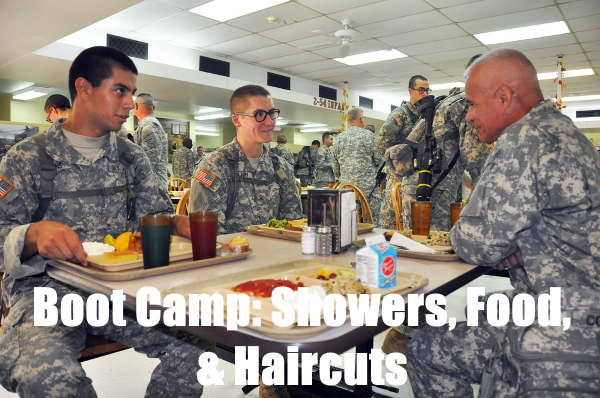 There is an adjustment required for new recruits when it comes to standards for basic training showers, food, and military haircuts.