Furthermore, there are hundreds of U.S. joint bases managed overseas.

What are the best Navy bases in the country and abroad?

Learn more about the top Navy bases for singles and families.

Best Navy Bases in the U.S.

The Navy manages 40 bases in the United States with most of them on either coast.

California has the most Navy bases (10) while Florida is right behind with 9 of its own.

Here are the best Navy bases in the United States based on criteria like location, housing, amenities, and community support:

NOTE: We got assistance from Our Military putting together this list of the best Navy bases. You can read the original article here.

In case you’ve never been there, San Diego is one of the finest places on earth with fantastic weather, beaches, nightlife, attractions, and a more laid-back vibe compared to its northern neighbor L.A.

As a result, it’s not shocking that Naval Base San Diego is by far the most sought after station for duty in the U.S. Navy.

The second-largest Surface Ship base impressively contains over 50 ships from the Pacific Fleet.

The complex is impressive to tour with 13 piers over 1,000 acres of land.

San Diego is a wonderful place to call home as it’s very supportive of the military.

The city has a plethora of things to see and do but you’ll definitely pay more in housing for this luxury.

The cost of living is worth it for outstanding weather and culture.

There is a lot of competition for the second spot on the list of best Navy bases in the country.

However, it is hard to ignore the precious history and legacy of Joint Base Pearl Harbor-Hickam.

The base has been in operation since 1899 and was infamously bombed during the Japanese attack on Pearl Harbor which got America involved in WWII.

Joint Base Pearl Harbor-Hickam is across from Honolulu on the island of Oahu.

The large base currently supports more than 66,000 sailors and their families.

Along with the rich history of the base at Pearl Harbor, you also get the once in a lifetime opportunity of residing in Hawaii.

Though housing and food are expensive like San Diego, it’s foolish to pass on the opportunity to serve here at least once.

The weather, scenery, beaches, hiking areas, and culture will make you never want to leave paradise.

Naval Station Norfolk is the largest Navy base in the world, regardless of the country.

Additionally, 112,000 family members and 30,000 civilians are part of Naval Station Norfolk in one regard.

The fleet of Naval Station Norfolk is astonishing with 75 ships and over a hundred aircraft.

Base housing is somewhat competitive since there are so many people in the area, but not impossible to obtain.

Along with plenty to do in Virginia Beach you will also enjoy mild summers for the coast with winters that are not too terrible.

The Navy does not have as many military complexes in the United States compared to the U.S. Air Force and Navy.

However, that is not to suggest that it lacks a presence overseas where demand for Navy bases is perhaps stronger than any other military branch.

The United States government relies on the Navy for quick access to a foreign land in the event of a conflict.

Here are the top places to get stationed overseas (if you are so lucky!):

Naval Station Rota is in southern Spain along the west coast of the country leading into the Atlantic Ocean.

The base is across from Morocco and not far from Portugal.

Anyone that has ever been to Spain has very good things to say about the country and all the places to see.

Along with sailors the base also hosts Marines and a small contingency of Air Force and Army personnel.

Therefore, you’ll get exposure to all branches of the U.S. military along with a foreign culture.

It’s a really attractive option for young and single sailors with such an incredible nightlife.

Naval Air Station Sigonella serves as both an Italian Air Force base and military installation for the U.S. Navy.

The complex is in Sicily, Italy, the largest island in the Mediterranean and near the “boot” and “toe” of the country.

The United States Armed Forces use Naval Air Station Sigonella heavily for stops bound from the U.S. to Southwest Asia.

Along with spending your free time touring Italy you also have close connections to several other European countries.

You’ll love everything the beautiful country has to offer for Americans.

Sailors that are searching for something more in the Far East have a couple of options.

The first place is Naval Base Guam on the very remote island of the Philippine Sea.

The Navy base is near the Pacific Ocean and also supports U.S. Air Force operations.

Living in Guam is literally like going to another planet as you are thousands of miles from Hawaii and about as far away from the United States as possible.

Meanwhile, the United States Fleet Activities in Yokosuka is another option worth pursuing in Asia.

The U.S. Navy base is in Japan with quick access to Okinawa.

Where are the best places to request a Permanent Duty Station in the U.S. Navy if you have a family?

Military families have many challenges different from a traditional civilian family.

However, you can improve your odds of success and survival is partly dependent on where you get stationed.

Fortunately, these Navy bases are herald for being friendly to military families:

Despite technically being within the boundaries of Georgia, Naval Submarine Base Kings Bay is as close to Florida as possible.

The southern Georgia base is also along the Atlantic Coast offering some spectacular views with entertaining in nearby Jacksonville.

Kings Bay is a small community that is next to the historic town of St. Mary’s.

Regardless of the direction (north or south), you’ll find many other military families for networking and support.

Housing is also reasonable even if the summers are a little brutal in terms of temperatures.

There are many that consider Naval Air Station Pensacola one of the best Navy bases in the nation.

It’s easy to understand why Pensacola has such a fantastic reputation with 15,000 military personnel calling the place home.

Pensacola is along the Florida panhandle so unfortunately, it’s not too close to any of the major cities of Florida.

However, it’s a good place to raise a family if you don’t care about being close to a metropolis.

Housing is extremely affordable with great family-friendly amenities on the base.

Children will enjoy watching the Navy Blue Angels train at their headquarters.

Naval Air Station Corpus Christi, like the base in Pensacola, is renowned for its heritage training Navy pilots.

The Naval Air Training Command still has its headquarters at Corpus Christi which has been training pilots since World War II.

Corpus Christi is among one of the better places to live in the massive state of Texas which is very friendly to active-duty military and families.

The pretty city is rich in culture and among the fastest-growing places in the U.S.

However, housing remains modest and the weather is mild, especially in the winters.

Corpus Christi also provides quick access to numerous beaches in the region for a family getaway.

Military life is not much different than civilians when it comes to the stark difference between where singles and married couples want to live.

Thankfully, the U.S. Navy is one of the best branches to join for single people since you have more of an opportunity to see the world as well as live on a coast.

Naval Station Pearl Harbor makes our list not once but twice.

In addition to being one of the best Navy bases in the world, it also is a terrific location for sailors living the single life.

Hawaii has everything someone not attached to a significant other or kids would want like beaches, hiking trails, entertainment, and nightlife.

The large base has a handful of people that will want to join you on a night out.

You’ll also probably want to stay on the base since housing is astronomical in Oahu with small apartments that average $2,000 a month.

It helps to get on a waiting list as soon as possible for base housing.

Naval Base Kitsap would be number one on the list if not for a military presence in Hawaii.

Along with catering well to singles, it is also a fantastic Navy base in general.

Washington has multiple Navy installations along the Pacific Northwest yet Naval Base Kitsap is the highlight.

The third-largest Naval base in the country includes four nuclear shipyards and one of only two nuclear weapons facilities.

Puget Sound is one of the most desirable places to live and tourist destinations in the world so you’ll have no problem finding things to do or people to meet!

Though most sailors that are single will do absolutely anything to get stationed in San Diego there is a possibility you might miss out on the highly competitive base.

Naval Air Station Lemoore is a really good alternative for singles in California.

Lemoore is approximately halfway between San Francisco and Los Angeles.

If you love the outdoors you’ll appreciate the quick access as well as a reasonable drive to one of the two biggest metropolises in California.

It’s not excellent for nightlife in the immediate area but ideal for those that love the outdoors and more rural settings.

The weather and on-site amenities are also amazing.

The best Navy bases in the country have a lot to offer.

While most agree that Naval Base San Diego tops the list there are several other excellent places to get stationed.

Your priorities might change depending on if you are single or have a family, yet there is a Navy installation for everyone!

Nicholas A.
Nick Anderson has been serving on Active Duty in the U.S. Navy for the last 10 years. He graduated from Saint Leo University with his B.A. in Accounting and is a graduate student at the University of Louisiana at Lafayette, pursuing an M.B.A. in Finance. Born and raised in Huntsville, Alabama, Nick enlisted in the Navy at the age of 17. During his deployments onboard the USS Fort McHenry, he traveled to 23 countries on four continents, sailing roughly 42,000 nautical miles across 30 seas and five oceans. He currently resides in Meridian, Mississippi.
Latest posts by Nicholas A. (see all) 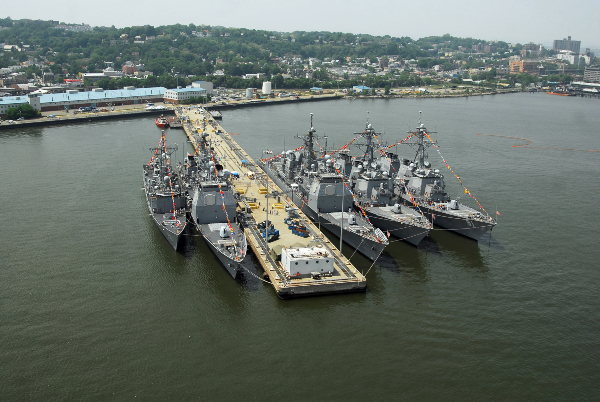 Apart from ships, the US Navy has bases all over the United States as well as the world. Check out our list of the best Navy bases to be stationed at.