Does Amazon Prime have a good selection of war movies?

It varies as entertainment shifts from one streaming service to the next but, in general, Amazon Prime is difficult to beat.

The popular streaming service features one of the biggest catalogs of movies and TV shows, including original content.

The best war movies remind us of the courage, sacrifice, and commitment service members provide this Veterans Day.

Therefore, we present the 12 best war movies on Amazon Prime moving into the holiday season.

“Rescue Dawn” was a movie that a lot of audiences slept on during an era that was producing several war epics.

However, that’s a shame considering it’s an incredible tale of survival.

In fact, the story resonated so much with director Werner Herzog that he elected to adapt his own documentary into a feature-length film.

Therefore, audiences get the fictional account of U.S. Navy pilot Dieter Dengler and his journey surviving the Vietnam War.

The film stars a young Christian Bale (prior to “Batman” fame) and is an underrated gem.

You’ll be enthralled by Dengler’s attempts to escape captivity as a POW after he’s captured by the Laotian regime.

“1917” is a masterpiece you need to witness in the event you missed out on this 2019 Oscar winner.

The film revisits Europe during the height of World War I and gruesome trench warfare.

Consequently, “1917” is a cinematic achievement for painting an accurate portrait of a war landscape during that era.

The film is produced with the illusion that it’s all from one perspective, orchestrated through one continuous shot.

Therefore, “1917” is a visual marvel that holds intrigue and breezes through its 2 hours of run time.

Sam Mendes certainly knows what he is doing and, as a result, takes audiences back to a different century to witness WWI like never before.

In fact, the film even features real accounts from Mendes grandfather who served during World War I.

“Fear and Desire” is a little known film by Stanley Kubrick, even if it was his directorial debut.

The film isn’t based on any actual conflict, regardless, is worthy of the best war movies on Amazon Prime.

Kubrick was a genius according to many in the film industry and demonstrates some of his early talents in “Fear and Desire”.

“Fear and Desire” was produced on a shoestring budget with a small crew during the midst of the Korean War.

As a result, the film is not as elaborate as future Kubrick work yet is still an interesting watch at just over an hour.

“Fear and Desire” is designed to reflect the trials and costs of war.

“A Farewell to Arms” is another American war classic.

The iconic Ernest Hemingway tale is adapted to the big screen in this 1932 gem.

“A Farewell to Arms” is definitely a masterpiece for those that really like to dive back into the history of film making.

The film retells the famous tale of love set amid the carnage of World War I.

To this day, “A Farewell to Arms” is considered one of the best war movies (and definitely worth a watch on Amazon Prime, as a result).

“A Farewell to Arms” is about a U.S. ambulance driver that falls in love with a British nurse.

It demonstrates Hemingway’s notorious cynicism in the vintage, black and white format.

#5. 13 Hours: The Secret Soldiers of Benghazi

Michael Bay rarely fails to deliver in terms of action and adventure.

He’s produced a variety of Hollywood blockbusters including the “Transformers” franchise.

Thus, during the height of his notoriety, Bay also released a movie about Benghazi.

It was a little controversial at the time considering the U.S. government was still being investigated for it handled the incident.

Nevertheless, citizens get a fair perspective on the events that unfolded in Benghazi, most importantly the bravery of 13 soldiers.

“13 Hours: The Secret Soldiers of Benghazi” is a fictional retelling of a small security team that was assigned to defend a U.S. diplomatic compound overseas.

At the time in Libya, the diplomatic headquarters were being threatened by an onslaught of militants.

However, you’ll have to strap in for what seems like 13 hours (considering the nearly 2 1/2 run time).

“By Dawn’s Early Light” is an interesting perspective from the heightened paranoia of the Cold War era.

During that time period, Hollywood didn’t miss out on the chance to speculate on what may happen to the world if the Soviets took over.

For starters, there was a McCarthyism era of removing suspected socialists and others disenfranchised with the government from the industry.

Then, Hollywood decide to poke fun at the subject by offering up satires like “Doctor Strangelove”.

However, the movies that took a more serious, bleak tone – such as “Red Dawn” and “By Dawn’s Early Light” – were perhaps the most noteworthy.

“By Dawn’s Early Light” presents a realistic portrayal into the final days of the USSR.

The cast is stellar with powerful performances from Powers Boothe and James Earl Jones.

The drama in “Journey’s End” unfolds like theater because the story was originally designed for the stage.

Therefore, when Saul Dibb adapted this classic play in 2017, many critics were skeptical.

Notwithstanding, “Journey’s End” does a wonderful job presenting a complex story about WWI even if the soldiers do not travel far.

Instead, “Journey’s End” is largely based on a group of British soldiers that are forced to play an agonizing waiting game with German troops.

As a result, audiences begin to watch as the personalities from the soldiers present themselves while tension mounts on the front line.

“War Horse” is not only one of the more underrated war movies on Amazon Prime, but also a hidden gem for Steven Spielberg.

Of course, we all know the director from famous movies like “Jaws” and “Indiana Jones”.

However, not everyone has seen this 2011 war epic that flew a little under the radar.

“War Horse” is unique in that for a war movie – it’s family-friendly (rated PG-13) – and focuses more on the perspective of a civilian.

Meanwhile, audiences are also treated to the experience of the lost horse (Joey) that manages to impact the lives of many during humanity’s darkest hours.

“The King’s Choice” is another war epic that arrived in the last 10 years not to gain a ton of notoriety.

The film takes viewers back to World War II while learning about one of its lesser known chapters.

For this reason, “The King’s Choice” explores what occurred in Norway during the early days of the conflict.

Norway was eventually invaded by the gruel Nazi empire leading to U.S. involvement in WWII.

The film responds not only how King Haakon VII responded to the threats, but also ordinary citizens.

“The King’s Choice” is worth a watch for those that like to dive deep into WWII history.

Consequently, when the company was shopping ideas for something that looked and felt like “Jack Ryan” – they elected for “Without Remorse”.

“Without Remorse” had a ton of potential considering Amazon signed on Michael B. Jordan as the lead character.

However, the general consensus was that the concept lacked anything new or different compared to other “Tom Clancy” inspired movies.

Of course, Michael B. Jordan is as solid as ever in his performance, but nothing about the story is overly impressive.

Instead, it revolves around a U.S. Navy SEAL entangled in a war-driven conspiracy that threatens to ruin his career and reputation.

“The Wall” deserves consideration if you are looking for one of the top war movies on Amazon Prime.

Doug Liman, the director, has established himself as one of the best producing thrillers (“The Bourne Identity”, “Edge of Tomorrow”).

Liman is also gifted at shooting on a small budget (“Swingers”) and knack for combing comedy with action (“Mr. and Mrs. Smith”).

Therefore, fans were intrigued when it was announced Liman would shoot a war epic – “The Wall” – with only 3 characters in the cast.

“The Wall” slipped past mainstream audiences yet is an underappreciated thriller that provides some perspective on the Iraq War.

“The Wall” sort of has the feel of a modern “1917” since audiences only see 2 characters on screen the entire movie.

“The Last Days of Patton” was originally a made-for-TV sequel to “Patton”.

The film features the same actor (George C. Scott) that portrayed the legendary general in the big screen adaptation.

“The Last Days of Patton” – as the title of the movie would indicate – takes a more solemn approach during the remaining days of the war hero.

The film takes place over the final weeks of Patton’s life after he was paralyzed from a car accident that would eventually claim his life.

Nevertheless, the film also goes back in time as audiences witness other crucial moments of the general’s life.

George C. Scott once again delivers even if this sequel is not nearly as recognized as the original war epic.

War classics take audiences back to the days of black and white footage along with other examples of old-school filmmaking.

These movies present an opportunity to learn about history as well as get lost in a fictional story. 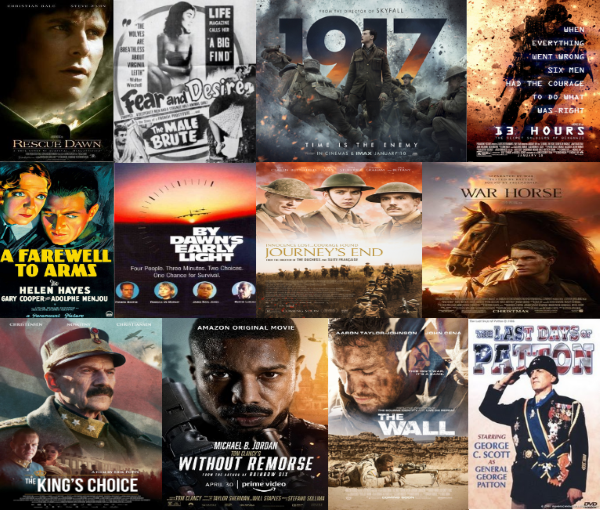 Our list of the 12 best war movies on Amazon Prime includes titles like 13 Hours, Rescue Dawn, The Kings Choice, and more.