The branches of the U.S. military feature somewhat different camouflage patterns for their uniforms.

OCP, Operational Camouflage Pattern, was approved for wear by the U.S. Air Force in 2018, and has since been integrated into this branch of the Armed Forces for mandatory wear.

The OCP is the same camouflage pattern of uniform worn by members of the U.S. Army, and has replaced the ABU (Airman Battle Uniform).

Here are six things you should know about Air Force OCP.

The ABU is what most airmen have worn since October 2011.

Initially, the ABU was designed to match the Universal Camouflage Pattern developed by the U.S. Army.

In addition, the “tiger stripe” pattern of the ABU uniform was intended to pay tribute to the camouflage worn by service members during the Vietnam War.

However, the pattern was deemed ineffective in terms of concealment—especially for those deployed within Afghanistan’s diverse terrains.

Therefore, the Army and Air Force issued OCP uniforms to soldiers, airmen, and others who were deployed to Afghanistan.

This was so they could blend in with the environment more efficiently and effectively.

Ultimately, the OCP was determined to be a better uniform choice overall than the ABU.

2. Transition To The OCP

In October of 2018, the Air Force approved the OCP, the Army’s service duty uniform, to be worn full-time.

The Army began its transition to the OCP three years earlier, in July of 2015.

The expectation was to retire the ABU after more than a decade of wear and use, and transition to the OCP by April of 2021.

This included all airmen as well as Space Force guardians.

As a result of some delays due to the global pandemic, the Air Force allowed approximately three years to phase in the OCP.

The Air Force has planned to donate remaining uniforms and gear associated with the ABU to junior ROTC programs across the U.S.

The coronavirus pandemic impacted the Air Force’s transition from ABU to OCP uniforms as far as timing.

Though ABUs were supposed to be phased out in favor of the OCP uniform by April of 2021, the Air Force had to make adjustments to this deadline due to COVID-19 restrictions.

In fact, extending the transition from ABUs to OCPs was done in an effort to alleviate and reduce stress on service members and professionals of the Air Force and Space Force.

As a result, the Air Force extended the time required for airmen to update certain elements of the Operational Camouflage Uniform by nearly six months, overall.

This extension applied to the modifications for the Two-Piece Flight Duty Uniform (2PFDU) as well.

4. Benefits Of The OCP

The OCP uniform offers many benefits to Air Force service members, especially when compared to the ABU.

Here are just some benefits of the OCP:

In addition, most Air Force members report that the OCP is preferable in high-pressure mission environments.

This includes a much more effective camouflage design and efficient style for both at home and abroad.

The Air Force has published updated guidance for wearing the OCP uniform.

These regulations can be found in Air Force Instruction 36-2903, “Dress and Appearance of Air Force Personnel.”

Such updates include the following for OCP uniform changes:

6. Feedback From Service Members Regarding OCP

Though some Air Force service members have reported that they will miss the history and look of ABUs, the overall feedback regarding OCP uniforms has been positive.

In addition to the benefits of the OCP uniform mentioned above, many airmen have expressed approval of the Air Force moving to a single combat uniform.

In fact, numerous airmen have actually worn the OCP uniform since 2012, well before the Air Force’s decision to transition from ABU to OCP.

These include Air Force service members who have deployed overseas to Afghanistan and other areas.

Members of the Air Force Special Operations Command in addition to some Security Forces units were among the first to wear the OCP uniform.

This took place during certain deployments and other conditions.

As the Air Force has transitioned to OCP uniforms, unit patches have also returned.

Unit patches had not been part of this branch’s uniform since 2011, when BDUs were phased out in favor of ABUs.

As a result, Airmen are authorized two patches per sleeve to wear in addition to a rank patch in the coat’s center.

This is a change from the long-standing practice of rank being worn on uniform sleeves.

For the first time, non-flying Air Force service members are allowed to wear the American flag on their right sleeve, like their aircrew counterparts.

Since OCP uniform patches and ranks do not have to be sewn on, as they were for ABUs, maintenance of the current uniform is easier.

This also makes the OCP less costly and allows for quick changes in patches and/or rank.

Overall, with the OCP uniform and return of unit patches, members of the Air Force are able to showcase the branch’s proud history and their unit pride. 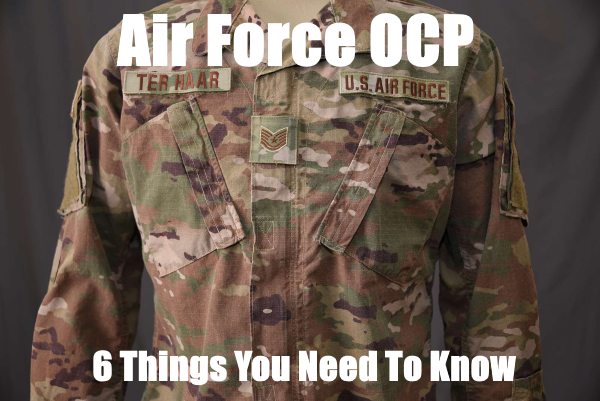 The Air Force OCP uniform are cammies worn by members of the USAF. Learn more about the uniform here.