Also, the Coast Guard is a part of Homeland Security during times of peace, but if we are at war, they become a part of the Navy.

Furthermore, the Coast Guard uses a letter and a number to show the ratings and pay grade, and rank is different than a Seaman’s pay grade.

Also, a Seaman’s rank relates to responsibilities in the Coast Guard.

Enlisted promotions are based on merit.

Afterward, this raw score is combined with other scores, such as your recent evaluation, time spent in service, and your current rank.

All the scores are calculated together, and those eligible for the promotion are on a list starting with those with the highest scores.

Therefore, the calculation of scores is the service-wide competition where your promotions are based on our accomplishments.

Lastly, open positions are filled by those at the top of the list first.

A Seaman Recruit is an entry-level rank for members just joining the Coast Guard.

To move up in rank to a Seaman Apprentice, you must complete Coast Guard basic training and have a recommendation of the commanding officer.

To become a Seaman, you must have six months as an E-2 and complete your ‘A’ course.

Petty Officers have a growing set of responsibilities for those under them, as well as performing their own duties.

Promotion to Petty Officer Third Class is based on basic requirements such as six months of time in rating (TIR).

Also, members must complete their ‘A’ school or their on-the-job training program, if they have not done so already.

Furthermore, you must have approval from your commanding officer (CO).

To become a Petty Officer Second Class, you need to fulfill your basic requirements, such as the service-wide competition, and the CO’s recommendation.

To become a Petty Officer First Class, you must have 12 months as an E-5.

Furthermore, you will need your CO’s recommendation and completion of any schools related to your rating.

Finally, your promotion depends on how you rate on the service-wide competition.

Also, the same requirements regarding schools for the rating, recommendations, and service-wide scores apply.

Also necessary are the same basic eligibility mentioned above as well as the completion of the Chief Petty Officer’s Academy or other academies offered by the Department of Defense.

Recently the Coast Guard announced the Master Chief Advancement Panel (MCAP) for advancement to an E-9.

However, basic requirements, such as CO recommendations, still apply.

Warrant Officers receive appointments by the president, and there are five grades.

Therefore, you might consider entering the Coast Guard through the Officer Candidate School (OCS), which is a 17-week course.

After you graduate, you will receive a rank as an O-1, and you can expect to serve at least three years.

Although, another option is a Direct Commission Officer program.

If you have specialized education and experience, you should talk to a recruiter about officer opportunities.

Officer promotion information is not widely published for the Coast Guard; however, Officers are not guaranteed promotions.

Also, a selection board meets once a year to evaluate officers to determine who is fit for promotion.

However, the board has a set of criteria they use depending on the rank of which they need candidates.

Therefore, there are four basic areas of consideration:

There are several officer ranks in the Coast Guard.

Are There Opportunities for Advanced Promotions in the Coast Guard?

Advanced promotions are available for those who have college credits or participate in JROTC.

Also, Eagles Counts and Civil Air Patrol programs will earn you an advanced promotion after the completion of boot camp.

Furthermore, if you have prior military service, you can expect an advanced rank.

How Often Are Officers Considered for Promotion?

Officers with a rank of O-1 and O-2 have evaluations bi-annually.

O-3 and above have annual reviews by their supervisors with an officer evaluation report.

The Coast Guard has different categories of rank.

Promotions in the Coast Guard are based on merit.

Also, a service member earns points for accomplishments as part of the service-wide competition.

Those with the highest points are higher up on the list of promotable service members.

Eventually, there are vacancies in the Coast Guard, and those higher on the list receive their promotion.

Commissioned officers are not guaranteed a promotion, as they are based on who is the fittest for the promotion. 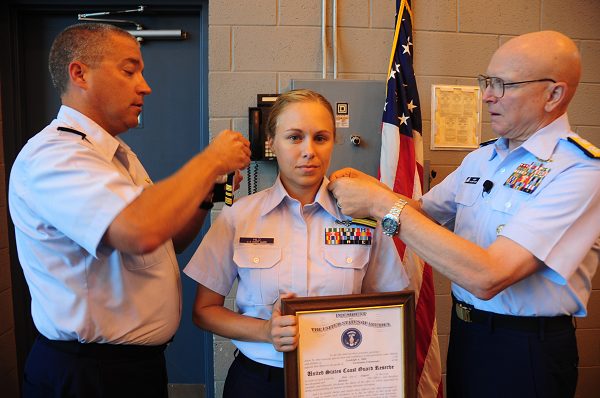 Learn more about the Coast Guard promotion timeline for both enlisted as well as officers.