When considering a career in the Marines, it is essential to pay attention to the Marine Corps promotion timeline when making long-term decisions.

The early ranks in the Marines are mostly automatic promotions as long as the Marine has the appropriate Time in Service (TIS) and Time in Grade (TIG).

Also, the Marines made recent changes that change the TIS for some ranks to increase the level of expertise in those ranks and to increase retention.

Therefore, if you are considering a career in the Marines, it is helpful to understand the promotion system and the steps you can take to maximize your career.

Non-commissioned officers in the Marines have other requirements beyond TIG and TIS.

Also, to be considered for a promotion, you will need to finish Professional Military Education (PME) courses.

From the ranks of E-6 to E-8, there are different courses designed to address the professional needs of that particular rank.

The Marines utilize a point system to determine who is the most qualified for a promotion.

Also, there are several different categories:

Those who first enter the Marines are Privates with a rank of E-1. To move from an E-1 to an E-2, which is a Private First Class, you need six months of TIS and TIG.

Also, to continue to a Lance Corporal (E-3), you need nine months of TIS and eight months of TIG.

Furthermore, these first ranks are mainly automatic, and there are no quotas set to say how many people the Marines can have at these ranks.

Therefore, unit commanders have the discretion to promote as long as Marines meet the TIG and TIS criteria.

Promotions above an E-3 are very competitive in the Marines.

All non-commissioned officers must complete the Professional Military Education courses.

Also, they must meet the appropriate TIG and TIS.

To advance to a Corporal, you will need 12 months of TIG before being eligible for consideration.

For consideration for the rank of Sergeant, you need 48 months of TIS as of January 2020.

Also, this TIS recently increased to ensure Marines have time to improve their expertise in their rank.

The Marines changed to TIS and TIG for non-commissioned officers in January to increase the overall experience level of NCOs.

This means Marines will have to reenlist to achieve certain ranks.

Therefore, Marines selected for E-6 to E-9 must have 24 months left of their contract.

This process ensures the Marines are retaining experts in their field and rank.

The TIS requirement is six years.

Also, the TIG is three years.

These two ranks have the same grade, but the First Sergeant has more responsibilities.

Therefore, a First Sergeant works for the commander.

Both Master Sergeant and First Sergeant promotions require eight years of TIS and four years of TIG before consideration.

Also, you must indicate as an E-7 which of the two you prefer for your promotion.

Sergeant Major is a rank and a military billet and serves as a senior enlisted Marine and is considered a unit commander’s advisor.

Warrant officers in the Marines are highly ranked and considered subject matter experts in their field.

There needs to be a vacancy before a promotion is considered.

Also, Warrant Officers are eligible for promotion after 24 months of TIG in each grade.

To become a Marine Commissioned Officer, you will need a bachelor’s degree before joining the Marines.

Also, you will attend training unique to the leadership you need for the occupation you have.

Officer promotions are not automatic, as there is an evaluation process.

Promotions as an officer take into consideration personal performance, length of service, fitness level, and the needs of the Corps.

A selection board reviews the file of a candidate, and they determine eligibility.

Also, promotions are earned and not based on seniority.

There are minimum TIG requirements for Commissioned Officers, but waivers are available according to the needs of the Marines.

There is no minimum TIG to move from First Lieutenant to Captain.

Your next three promotions require three years of TIG, while the final two require one year.

While planning your Marine career, you likely have some questions.

What is the Meritorious Promotion Program?

Commanders can promote some Marines who demonstrate they can handle the duties of a higher rank.

There are still some basic TIG requirements for these promotions, however.

Also, a commander can only give a meritorious promotion up to and including an E-7.

How Can an Officer Selection Officer Help me become a Commissioned Officer?

You will want to contact an Officer Selection Officer (OSO) to get help understanding the different paths you have to become a commissioned officer in the Marines.

The OSO screens candidates and aids in determining the best way towards your commission.

After joining the Marines, you will notice many of the initial ranks promote automatically as long as you have the right amount of Time in Service and Time in Rank.

As you grow in your Marine career, it is essential to look ahead and make plans to continue your education and work to stand out from the rest. 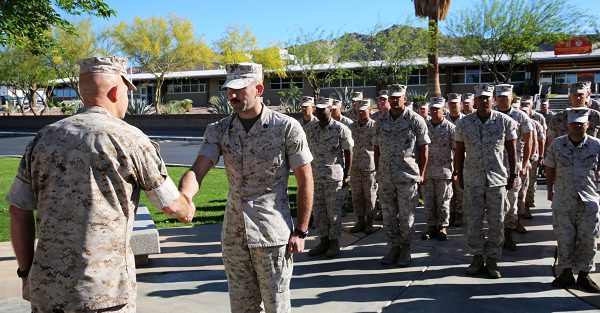 See what the Marine Corps promotion timeline is for both officers and enlisted. Includes info on commissioned and non-commissioned as well.