The Coast Guard often gets overlooked when recruits consider the different uniformed services of the U.S. Armed Forces.

It is a mistake as the U.S. Coast Guard serves two vital functions on American soil – maritime security and law enforcement.

Additionally, the Coast Guard has Special Forces just like any other military branch, even if the USCG is technically not Department of Defense (DoD).

Joining Coast Guard Special Forces is a thrilling opportunity to combat terrorism and other threats at sea.

Learn more about the different Coast Guard Special Forces to find which unit fits the description of what you are looking to get out of the USCG.

What Types of Coast Guard Special Forces are there?

The U.S. Coast Guard represents the maritime security, search and rescue, and law enforcement branch of the Armed Forces.

The branch is unique in that it carries out maritime law enforcement in domestic and international waters, along with highly sophisticated missions.

Is is currently under the supervision of Homeland Security, however, the Coast Guard also provide support for the U.S. Navy with its Special Forces.

DOG performed highly specialized missions for the Department of Defense yet was decommissioned in 2013.

Regardless, many of the original units created by DOG continue to operate under the Coast Guard under the new title Deployable Specialized Forces (DSF).

Coast Guard Special Forces provided critical response to the 2010 earthquake in Haiti along with the Deepwater Horizon oil spill in the Gulf of Mexico.

Along with assisting in natural disasters, much of the other work performed by Coast Guard Special Forces is highly confidential.

Nonetheless, we do know that Coast Guard Special Forces are the first response for counter-terrorism on open waters, including combating piracy operations in the Middle East.

There are many units that fall under the Coast Guard Special Forces umbrella:

The Maritime Security Response Team (MSRT) is the most recognizable of Coast Guard Special Forces.

Coast Guard MSRT is the only unit within the military branch that can provide counter-terrorism support.

While Coast Guard MSRT primarily focuses on protecting domestic waters and assets, the unit may rapidly deploy to other parts of the world in response to incidents.

As a result, Coast Guard MSRT units often train alongside other elite Special Forces such as Navy SEALs.

As is the case with most Special Forces, it is not easy to join a Coast Guard Maritime Security Response Team.

Most candidates have already served in Maritime Enforcement (ME) and spend at least 1.5 years in training before officially joining a team.

Some current members of Coast Guard MSRT served previously on other USCG Special Forces such as TACLET and MSST.

There are many that seek to become team members of Coast Guard MSRT’s primary assault force, known as the Direct Action Section (DAS).

As a result, they can quickly and inconspicuously board suspicious vessels, secure assets, and eliminate hostile targets.

Coast Guard Maritime Safety and Security Teams (MSST) have not been in existence near as long as MSRT.

The Special Forces unit was established under the Maritime Transportation Security Act of 2002 in response to the 9/11 terrorist attacks.

The 11 units focus on producing waterborne and shore-side counter-terrorism and force protection for shipping and other high interest vessels.

Coast Guard MSST is a quick response force that can also deploy around the globe similar to MSRT units.

Maritime Safety and Security Teams are capable of providing rapid deployment by air, ground, or sea.

MSST regularly trains alongside other Coast Guard Special Forces as well as Navy Special Boat Teams and the FBI.

Ultimately, the primary goal of Coast Guard MSST is to protect ports and other maritime facilities from another domestic terrorist incident.

Recruits that desire to join Coast Guard MSST can expect plenty of competition, just like joining other Special Forces.

Homeland Security keeps most of its operations secretive for good reason which is why we do not know a ton about Coast Guard MSST training.

All in all, you can expect comparable training and length in time (1.5 – 2 years) to prepare for a military career in Coast Guard Special Forces.

Coast Guard TACLET is much smaller than other Special Forces with only 2 units.

The first unit is located in Florida and protects the Atlantic Ocean and Gulf of Mexico.

Meanwhile, the second unit is headquartered in San Diego, California and supervises the Pacific Coast.

The small unit presents many forms of interdiction, including alien migration or military force protection.

It is challenging yet not impossible to join Coast Guard TACLET, just like the other Special Forces.

The waiting list is long and requires patience as it will take a year or more to complete training and that’s after you get into a specialized program.

You’ll need to successfully complete Coast Guard boot camp and other obligations before you get a crack at Special Forces.

The Coast Guard will also examine your personal character which is why establishing a strong reputation with the USCG from day one is important.

The Coast Guard National Strike Force (NSF) dates back much further (like TACLET) as it was established in the early 1970s.

At the time, Congress felt a need to protect the environment and thus created the Federal Water Pollution Control Act.

Consequently, the Coast Guard National Strike Force was created to support the mission and goals of the legislation.

Thus, Coast Guard NSF produces highly trained individuals that are prepared to rapidly respond to incidents across the globe.

Coast Guard NSF primarily deals with natural disasters and other devastating incidents to the environment such as oil spills.

The National Strike Force Coordination Center (NSFCC) presents supervision and guidance for all the strike teams.

The strike teams are stationed across the nation in New Jersey, Alabama, and California.

Each NSF team maintains specialized equipment and is prepared to deploy on a moment’s notice.

Coast Guard National Strike Force is highly respected and recognized throughout the world as expert authorities on preparing for and responding to oil spills or other hazardous substance releases.

There is a significant amount of training to become Coast Guard NSF since you are dealing with hazardous material and weapons of mass destruction.

Regardless, the specialized unit is worth pursuing especially if you want to provide some humanitarian relief during your time serving the country.

U.S. Coast Guard Port Security Units (PSU) have the longest history of any Special Forces within the military branch.

The origins of Port Security within the U.S. Coast Guard dates back to 1917.

The special unit was created with the passing of the Espionage Act which was made in response to the Black Tom explosion.

Moreover, they can assist with military combat operations including point defense of strategic shipping and other valuable assets.

Coast Guard PSU can rapidly deploy to other parts of the globe just like other Special Forces.

In fact, Coast Guard PSU is the only deployable expeditionary force within the military branch.

Coast Guard Port Security Units can deploy anywhere in the world within 96 hours of a crisis.

Furthermore, these highly trained units are capable of establishing operations in less than 24 hours upon arrival to the incident.

Consequently, it will take more than a year to successfully complete the training program yet is worth it for a fulfilling military career.

The 5 special units of the USCG often perform duo functions between helping keep the nation safe from terrorists and piracy, while also providing law enforcement and humanitarian relief.

While the Deployable Operations Group (DOG) is no longer in existence, the U.S. Coast Guard continues to command many of the same special units under the title “Deployable Specialized Forces” (DSF).

Coast Guard Special Forces are extremely well trained and prepared in a variety of roles.

The U.S. Armed Forces designed the Coast Guard to provide its own special ops in order to avoid another domestic attack like the one that happened on September 11, 2001.

It will takes years of patience and hard work yet training to join Coast Guard Special Forces is one of the most fulfilling military career paths you may pursue.

Learn more about how USCG Special Forces neutralize the threat by visiting the official website. 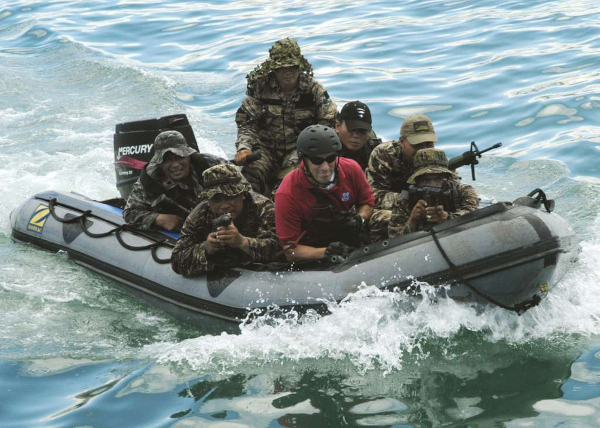 Believe it or not, the Coast Guard has their own sub-branches of special forces. Learn more about all 5 Spec Ops teams the USCG employs.