The United States Coast Guard sometimes gets treated like an after thought because of the common stereotypes.

While personnel of the Coast Guard are technically not members of the Department of Defense (DoD) like the other major branches of the U.S. Armed Forces, they do serve an important purpose.

Furthermore, the U.S. Coast Guard touts its own special forces unit that rivals the training and mission capacity of SOCOM.

Coast Guard MSRT members are highly respected and acknowledged within the military community as they often train alongside Navy SEALs.

Learn more about the USCG MSRT including the selection and training process by reading the full article:

What is Coast Guard MSRT?

Thus, the special unit is highly trained as it provides first response for terrorist situations that require boarding a hostile vessel.

USCG MSRT operates in both domestic situations as well as abroad.

They are considered the first call when dealing with hijacked ships and neutralizing terrorist situations on open waters.

Piracy and other threats at sea have contributed to more of a demand for Coast Guard MSRT in the last decade.

As a result, the U.S. Armed Forces has put extra emphasis on training the special unit as Maritime Security Response Teams often train alongside Navy SEALs.

Coast Guard Maritime Security Response Teams were formally established by the federal government in 2006 yet have technically existed in different forms for many decades.

Coast Guard MSRT represents the only unit within the military branch with counter-terrorism capabilities.

Therefore, it may conduct action against hostile targets both at land and sea.

Coast Guard MSRT also routinely trains and collaborates with other agencies like the FBI and Secret Service.

It has firm working relationships with border patrol agency units such as BORTAC as well as Customs and Border Protection Special Response Teams (SRT).

Coast Guard MSRT functions under the motto “Nox Noctis est Nostri” or “The Night Is Ours”.

The U.S. Coast Guard Maritime Security Response Team (MSRT) is a special unit that provides many functions to the military branch and national security:

They are trained to board medium to high risk vessels (level III & IV).

Maritime Security Response Teams were originally part of the Coast Guard Deployable Operations Group (DOG), which was dissolved in 2013.

However, the Coast Guard continues to fund and train MSRT units as the first line of defense against terrorism on open waters.

While USCG MSRT primarily focuses on the safety and security of homeland defense, teams may also get deployed worldwide to respond to incidents.

Here is a quick overview of what you can expect in terms of Coast Guard MSRT training from start to finish:

The introduction to Coast Guard special unit training. You’ll focus a lot on conditioning to prepare for a physical fitness test.

Recruits spend a few weeks getting an introduction to what it is like serving the Coast Guard in this capacity. You should expect a lot of classroom learning during the orientation.

Coast Guard MSRT has comparable training standards and exercises to Navy SEALs. Therefore, you could consider this stage of conditioning similar to “Hell Week” for SEALs. If you are going to drop out, this is probably the week.

Members of the U.S. Coast Guard are expert swimmers, and some specialize in diving. As you can imagine, Maritime Security Response Team members get additional, advanced training in the water.

Recruits begin to transition more into the culture and lifestyle as they adapt to land training exercises. The focus is on handling weapons and marksmanship, as well as land navigation and patrolling.

The United States Coast Guard has general requirements for all service members.

Additionally, every member of the military branch must complete basic training.

Coast Guard boot camp lasts 8 weeks and is considered one of the more strenuous of all the military branches.

Furthermore, male and female recruits (regardless of age) are held to the same intense physical fitness standards.

You’ll need to meet the following minimum fitness standards to qualify for service:

Members of the U.S. Coast Guard need to be exceptional swimmers in addition to training on land.

The requirements for joining Coast Guard MSRT are extensive because of the physical and mental demands of the job.

Additionally, you must qualify for security clearance with the Department of Defense.

In order to qualify, recruits must endure a thorough background check that involves looking into your personal finances and character, along with criminal history.

Those that require higher security clearances may also have family or friends under investigation during this process.

Members that seek to join Coast Guard MSRT excel at their current position and are generally hand selected or recommended by their superiors.

Thus, they already have experience and have developed a stellar reputation in terms of job performance and character.

Becoming Coast Guard MSRT is very competitive and many facets of the selection process are kept under wraps because most of the duties the special unit performs are highly secretive.

There is only a small fraction of recruits that attempt to secure a spot within the prestigious team that gain acceptance.

Consequently, you’ll need to work your butt off to join this elite force.

The selection criteria for Coast Guard MSRT is rigorous yet worth the adventure if you make the cut.

Related Article: List Of Coast Guard Bases In The US

The Coast Guard traditionally finds candidates for MSRT through its pool of Maritime Enforcement Specialists (ME).

Consequently, if you are interested in becoming MSRT, you’ll want to get into the Maritime Enforcement rating.

Recruits start training for this rating at Maritime Enforcement “A” School.

Unfortunately, the wait for ME “A” School can take 3 years or more since the training program is in high demand.

Those that complete the approximate 2 weeks of training receive orders from the USCG MSRT Whetstone Division.

The stage of training focuses on combat shooting and team movement exercises.

The purpose of the training is to produce competition for select seats that offer an invitation to the next stage in training – the Basic Tactical Operations Course.

Recruits learn a ton at the Special Mission Training Center (Camp Lejeune, North Carolina) if they are fortunate enough to receive an invite to advanced tactical training.

The Basic Tactical Operations Course lasts 2 months and trains recruits on a variety of skills.

Second Half of USCG MSRT Training

You will also need to complete the Advanced Tactical Operations Course at Camp Lejeune in order to quality for Coast Guard MSRT.

During this stage of training, you’ll spend a couple of months learning how to manage shipboard assaults.

Recruits are also trained on how to identify Chemical, Biological, Nuclear, and Radiological (CBRN) threats.

There, they must earn their qualification as an Advanced Tactical Operator.

Once the recruit becomes an official Advanced Tactical Operator, he or she may train on additional skills like breaching or precision marksmanship.

All in all, the Coast Guard MSRT training process lasts approximately 18 months without any major setbacks.

The United States Coast Guard does a good job of keeping a lot of the training for its specialized units secret.

However, we do have some details about Coast Guard MSRT training from former team members that have been generous enough to share their experience.

The Coast Guard keeps the training process private in the best interest of national security yet we do know that Maritime Security Response Teams often train with Navy SEALs.

As a result, the two special units utilize many of the same training exercises and expectations.

Navy SEALs have some of the roughest training regiments in the world which says something about what Coast Guard Maritime Security Response Teams also endure.

Most recruits that are interested in joining Coast Guard MSRT desire the Direct Action Section (DAS).

The typical team members of a DAS unit may include:

They utilize many of the concepts of the Navy SEALs notorious BUD/S (Basic Underwater Demolition/SEAL Training).

For comparison, Navy SEALs BUD/S training has only about a 1% survival rate which demonstrates precisely how difficult the selection and training is for specialized units in the water.

Coast Guard DAS units are highly trained to quickly and tactically board vessels that may be occupied or controlled by enemy targets.

Thus, they are well prepared for entry by air or sea and utilize a variety of methods to neutralize hostile targets.

Related Article: 18 Pros And Cons Of Joining The Coast Guard

How long does it take to join the MSRT?

All new members of the U.S. Coast Guard must complete basic training and other admission guidelines.

It is recommended that those who are interested in Coast Guard MSRT pursue the Maritime Enforcement (ME) rating.

It generally takes another 18 months of training to complete the requirements for Coast Guard MSRT without any hiccups.

All in all, it generally takes a member of the Coast Guard at least 1.5 years to officially join MSRT.

What kinds of operations is the MSRT involved in?

While most of their duties involve domestic problems and disputes, MSRT units are sometimes deployed across the globe.

In general, USCG MSRT acts as the first line of defense against terrorist threats in the water.

These units are well trained in counter-terrorist and direct action measures to neutralize threats in the water, including hostage situations.

Coast Guard MSRT personnel are incredibly well trained in a variety of weapons and explosives.

If there is a ship with enemy targets on board, the Coast Guard relies on MSRT to save the day.

What other units does MSRT work with?

Navy SEALs has one of the most demanding and intense training regiments in the world, which says a lot about MSRT training expectations.

Coast Guard MSRT also trains with other advanced units like:

The USCG Maritime Security Response Team (MSRT) is the only unit within the military branch that provides counter-terrorism support.

The Maritime Security Response Team acts as first responders to incidents in domestic and international waters.

They are leading experts on handling a crisis on a ship that may involve a hostage situation or piracy.

However, it will take at least 1.5 years in training to become an official team member. 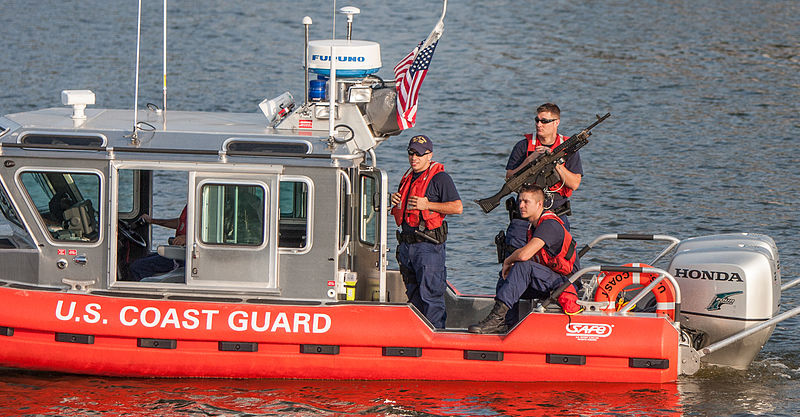 The Coast Guard Maritime Security Response Team, or MSRT, is the Coast Guard's version of Navy SEALs. Learn more about the requirements, training, and overall mission for the MSRT.