There are many different career fields one can enter when deciding to join the Air Force. When an individual has completed a Bachelor’s degree or higher, they are able to join the ranks as an officer.

As a result, this gives them more pay, more responsibility, and allow them to apply the things they have learned in school to something bigger than themselves.

One such assignment is Cyberspace Operations Officer, which is the foremost expert at protecting the United States from cyber attacks.

In an increasingly technology-driven world, these cyber warriors are tasked with leading, planning, and directing both defensive and offensive cyberspace maneuvers.

They neutralize threats like Distributed Denial of Service (DDOS) attacks, protect data and networks against viruses and attacks, and overall protect and reinforce critical infrastructure.

Let’s learn a little more about what it takes to be a Cyberspace Operations officer, including their salary, training, what a typical day is like, and civilian career opportunities after service.

Related Article: Top 20 Reasons To Join The Military (And 7 Reasons NOT To)

Requirements and Qualifications For Cyberspace Operations

If an individual completes a Bachelor’s degree with a focus in computer and information sciences, engineering, mathematics, computer science, management of information systems or any other STEM (science, technology, mathematics, and engineering) discipline they may be able to take their talents into the ranks of the United States Air Force.

In order to enter the Air Force and become a Cyberspace Operations officer one must meet the following basic requirements:

If you qualify, you must then move on to become an officer.

There are currently three ways to enter the United States Air Force as an officer of any discipline.

All 3 of these are very different routes to becoming an officer, and have their own requirements that need to be met.

After officially becoming an Air Force officer, a prospective Cyberspace Operations Officer will go onto their technical training courses.

The completion of a single scoped background investigation and a top secret security clearance are required before one can work in a capacity in which they will handle classified information.

The technical training course to be a Cyberspace Operations officer is held at Maxwell-Gunter Air Force Base in Alabama. 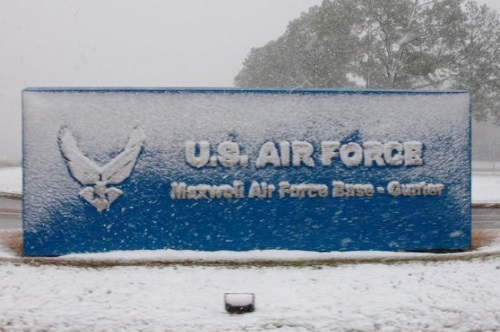 The school is nine and a half weeks and expounds on your previously learned knowledge in Cyberspace and applies that information to working with an Air Force system or network.

Some of the things you will learn in Cyberspace operations tech school include:

These are just the entry level knowledge tasks that all cyberspace operations officers will learn, after which you will move on to a more specialized education and training.

Why Does The Us Air Force Have Cyber security Operations?

Essentially, the Air Force prides itself in maintaining superiority in Air, Space and Cyberspace.

In order for them to evolve in cyber space, they must have individuals that specialize in handling computer networks and systems used to protect national security and the interests of the United States of America.

There are many systems and networks which are used to protect the United States and hold information on different projects that must be secured at all times to the highest degree.

In some situations, cyber professionals are employed in an offensive manner in which they are used to design attacks to test their own networks and systems or respond to attacks on its infrastructure.

All of the information relating to members of the Armed Forces is housed in some type of information database.

This information can be used to cause harm to members of the Armed Forces which in turn causes harm to national security. All of this information needs to be protected with some of the best protocols and practices used today.

Cyberspace Operations officers are not only used in a capacity of national defense, they are also employed in situations such as postal operations, medical database infrastructures, satellite operations for tracking and GPS (Global Positioning Services), and even simulation programming for pilots to get better at flying without taking off.

If the task requires the use of a computer system, a Cyberspace Operations officer can work with it to maintain it or make it better.

What’s The Pay Like As A Cyberspace Operations Officer?

For the most part, the pay of a Cyberspace Operations officer is just like any other officer in the Armed Forces with respect to locality pay or special duties.

Officers begin their careers as a second lieutenant and bring home roughly $3,000 a month.

Here’s a pay chart for Air Force officers for 2019:

This pay can raise to a yearly salary exceeding six figures depending on how much time one stays in the military, where they are stationed and if they receive any special duty pays.

Some common examples of special duty pay are things like working for the White House Communications Agency, or working in a remote location.

The career field can take you to all parts of the world and due to the universal nature of the work, there is no specific location where most officers end up.

Any location that deals with computer networks or systems (which can basically be considered as everywhere) can have a Cyberspace Operations officer assigned to it.

Related Article: 10 Pros And 10 Cons Of Joining The Air Force

What’s A Typical Day Like As A Cyberspace Operations Officer?

The average day of a Cyberspace Operations officer depends on the location they are assigned.

Some of the more popular locations that they serve at include:

In some situations they may have a high operations tempo due to the political climate or the size of the system.

In other situations they may work in a capacity in which they maintain networks or servers in which their whole day is planned.

There is no specific culture of Cyberspace operations officers as many of them come from all walks of life but one thing that can be said is there is a common passion for computers and information technology.

Civilian Career Opportunities Upon Retirement From the Air Force

The career opportunities for Cybersecurity Operations officers after service are nearly endless.

In addition, the pay in some situations exceeds the pay in the military.

As a result, you’ll often find that many officers who serve in this role will leave service after just 4 – 6 years to take on a more lucrative civilian job.

As a Cyberspace Operations officer, you are taught skills and have the experience to work in extremely stressful situations while maintaining military bearing.

You are also taught how to lead people in the same stressful situations which make someone getting out of the military a perfect candidate for supervisory or managerial positions while still practicing the career they love.

Some civilian companies that routinely hire Cybersecurity Operations officers right out of the military include:

Oftentimes, these jobs pay $100,000+ right out of the gate, along with very competitive bonuses, 401K plans, and other fringe benefits.

The job as a Cyberspace Operations Officer comes with many positives as well as drawbacks.

Depending on what you are looking for out of a career, you may love it but at the same time you may hate it.

You are given the opportunity to travel the world, lead people, be a part of a wonderful team taking part in operations that you would have never been able to do otherwise all while doing something that you are passionate about.

If you have an interest in becoming a Cyberspace Operations Officer, the first thing you should do is secure a degree and go talk to an Air Force recruiter.

They will point you in the right direction and you never know, it may be one of the best decisions you have ever made in your life.

Find An Air Force Recruiter Near You

Where are cyberspace operations officers based?

While they can literally be based anywhere, the most common locations are The Pentagon, and Peterson, MacDill, and Lackland Air Force Bases.

How much are they paid?

What is the AFSC?

Is it difficult to become a cyberspace operations officer?

It is definitely one of the more challenging jobs in the US Air Force.