Cyber Warfare Operators are charged by the United States Air Force to help defend our national interests from attack, as well as to utilize cyberspace to achieve national objectives.

However, the Air Force changed the rules at the beginning of the fiscal year 2019.

Civilians can still no longer join the Air Force as a Cyber Warfare Operator.

However,  the USAF initiated an initiative to allow select airmen in the cyber transport systems pipeline who display the ability to succeed in Cyber Warfare Operations (CWO) to be placed in the pipeline.

Although the training proved exigent for the first-term airman.

“It is definitely more challenging than an average technical training I’ve been through.

“The instructors impart a lot of knowledge, technical skills and they maintain a lot of technical expertise,” said A1C Cambaso after graduation.

However, the Airman is proud of his accomplishment and looking forward to serving as a Cyber Warfare Operator:

“I am honored to be the first non-prior service pipeline student.  I am excited to join like-minded individuals in a team effort to defend our nation’s cyberspace.”

What’s Life Like as an Air Force Cyber Warfare Operator?

To become a Cyber Warfare Operator in the United States Air Force, there are specific requirements and qualifications one must meet, which include:

Since Cyber Warfare is (primarily) a retrain-only AFSC, we will forgo the Basic Military Training (BMT) requirements that all Air Force personnel must go through at Joint Base (JB) San Antonio-Lackland, TX.

Instead, we will delve straight into the requirements of a Cyber Warfare Operator, or CWO. 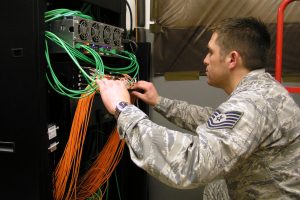 For CWOs who do not have the CompTIA Security+ certification, training is an additional month, as they also have to take IT Fundamentals and Security+.

Successful completion of this course is required to earn the right to wear the Air Force Cyberspace Operator Badge.

After technical training, most will go through Initial Qualification Training (IQT) depending on the weapon system their unit uses.

IQT can last anywhere from four months to three years. There is a wide range of difficulty in IQT.

In general, however, OCO positions have a longer and more difficult IQT.

How Much Are Air Force Cyber Warfare Operators Paid?

Pay for an Air Force Cyber Warfare Operator is identical to all other enlisted personnel (in all branches), based on an airman’s rank and length of service.

Air Force Airmen with AFSC 1B4X1 may also be entitled to other forms of compensation including a basic allowance for housing (BAH) and base allowance for subsistence (BAS) pay if eligible.

What’s Life Like as an Air Force Cyber Warfare Operator?

They must protect data and network systems above such passive defense measures such as anti-virus software and firewalls.

Provided directives, they must be able to interpret those into specific procedures as well as develop and execute operation plans.

Reviews from current and former Air Force Cyber Warfare Operators are overwhelmingly positive on the job site indeed.com where the job boasts a rating of 4.5 out of a possible 5.

Airmen posting on the site cited benefits, opportunities, training, guaranteed pay, and the opportunity to travel.

Respondents did have a few gripes (or cons). One reviewer was unhappy with frequent management changes, another not a fan of long work hours, and yet one more Cyber Warfare Operator disliking having to be on-call 24/7.

Cyber Warfare Operations is primarily a desk job, but one of the best ones in the Air Force.

CWOs normally work in an operations center or a planning cell.

Job hours vary for Cyber Warfare Operators depending on the mission’s unit.  Some CWOs will work 0730-1630.

Others will be required to work Panamas (12 hour days, two on, two off, three on, or three off).

It is all dependent on the unit to which they are assigned.

Occasional on-call duty, however, should be expected by all CWOs.

The top three traditional bases for 1B4X1 are:

But, there are many other Air Force bases that need Cyber Warfare Operators, as well.

Keep in mind, however, that these bases have many fewer billets than the top three.

The career opportunities for a Cyber Warfare Operator leaving the Air Force are excellent. In fact, they cannot be overstated.

Many Airmen leaving the military with the 1B4X1 AFSC are worth more than $100,000 annually in the private sector.

Government contracting positions that utilize and take advantage of the CWO’s Top Secret/SCI clearance are even more lucrative.

Air Force enlistees in the Cyber Transport Systems Pipeline who shine during training are sure to get tapped for the Cyber Warfare Operations Pipeline since the demand is so high.

If you are a dedicated Air Force airman in the cryptological or intelligence field, possess the necessary qualifications, have “the right stuff,” and are looking to be a player in the cyber arena, starting off as an Air Force Cyber Warfare Operator could just be your ticket.

As from Brigadier General Brian Kelly stated at the inception of the Air Force’s Cyber Warfare program two years ago,

“You join the Air Force, we’re going to give you all the training you need.  They’re not going to be masters by the time they graduate [from technical training], but they’re going to have enough skills to be successful in learning new things at that first base we send them to. There are not a lot of other companies that invest that much time. … They’re going to expect you to already know, and already have all your certifications. They’re not going to help you do that.”

What is cyber warfare operations?

What ASVAB score do I need for cyber warfare operations?

To qualify for cyber warfare operations, you’ll need a score of 64 in the General portion and a minimum score of 60 on the Electronic Data Processing (EDP) test.

How long is tech school for USAF cyber warfare operations?

How much does USAF cyber warfare operations pay?

Air Force Cyber Warfare Operations pays according to rank and time in service. However, this AFSC is currently eligible for a retention bonus.