The role of a sniper in combat takes on a life of its own. Snipers are a part of military lore, and debating the deadliest snipers in US history is a part of the fun.

Snipers are a critical part of successful military operations, and the unique set of skills possessed by snipers make them deadly and effective.

We put together ten of the deadliest snipers in US history.

Nicholas Irving was a member of the 3rd Ranger battalion out of Maryland, where he served as an Army special operations sniper.

Also, he is considered an infamous sniper with thirty-three kills over four months of an Afghanistan deployment.

Irving left the Army in 2010, and after working through struggles with alcohol and PTSD, he went on to become a best-selling author about his time as one of the deadliest snipers in US history.

Davis had a 4th-grade education, but because he grew up in the woods and was an avid hunter, he developed accuracy with shooting.

Also, Davis tried to join the military but was rejected because he was too short. However, he became drafted at the onset of the war.

Davis was a scout approved well skilled when protecting his company by locating and killing enemy gunners threatening his platoon.

Because Davis was such a good shot, the enemies were unprepared for his accuracy at long ranges. To Davis, 1000 yards was just a regular day of shooting.

Davis has 60 confirmed kills; however, it is said that he is responsible for many more kills.

Carlos Hathcock’s skill as a shooter began when he taught himself how to shoot as a child.

By then, Hathcock had already won shooting championships, setting him up as a potential for the deadliest snipers in US history.

Then, he deployed to Vietnam as a military policeman, but he volunteered to go into combat.

From there, he went into a Marine sniper platoon.

Hathcock became known as “White Feather” because he wore a white feather in his hat.

One impressive story about Hathcock is he took four days to crawl 1500 yards to get to his target slowly.

After his kill, it took him three days to get back while the enemy was searching for him.

However, the enemy was searching in a tree line with cover rather than where Hathcock actually was.

Also, Hathcock is infamous because he was finally able to kill a female Viet Cong leader known as Apache, who was known for publicly and sadistically torturing and mutilating Marines to their death.

Hathcock has 93 confirmed sniper kills to his name.

Stepan Petrenko was a Soviet sniper during World War II, with 422 confirmed kills during the war.

During World War II, the Soviets put a lot of effort into training snipers.

Stepan Petrenko is a testament to the efforts the USSR put into training their marksmen.

The Soviets named Petrenko a hero for his skill with a rifle during World War II, and with his kill count, he is definitely one of the deadliest snipers in US history.

While not an American, Ivan Sidorenko still is known as one of the deadliest snipers in US history.

Sidorenko taught himself how to be a sniper, and he fought for the Soviet Union in the Red Army during World War II.

While fighting in the Red Army against Nazi Germany, Sidorenko believed every shot should mean one kill, and he held to that promise.

Sidorenko has over 500 confirmed kills, which is astounding, especially for a man who worked as an artist before joining the Red Army.

Adelbert Waldron is one of the deadliest snipers in US history. Waldron served as a sniper for the United States Army during the Vietnam War. He was attached to the 9th infantry division.

For a long time, Waldron held the record for confirmed kills with 109.

Waldron started his military career in the Navy. Then, he joined the infantry for the Army.

Also, he said his record in under eight months during the Vietnam War.

Waldron spent his time in Vietnam in a very dangerous area with lots of overlapping streams and rice patties.

During his tour, he became famous for being an unstoppable force.

Because of his service, Waldron is known as a well-decorated soldier and a deadly sniper.

After the Vietnam War, he became an instructor at Fort Benning, where he trained soldiers in marksmanship.

Chuck Mawhinney Is from the woods in Oregon, and he served and Vietnam.

Mawhinney originally wanted to join the Navy, but a Marine recruiter convinced him to be a Marine.

He began shooting when he was a boy, and his father, a former Marine who fought during World War II, taught him how to shoot.

Therefore, when Mawhinney began shooting for the Marines, it was an easy transition.

Mawhinney was a master at cover and concealment, which led to his 103 confirmed kills.

However, Mawhinney has an additional over 200 probable kills to his name.

England became a Marine in 1950 and soon after that proved himself as a shooting champion.

Overall, England served The United States as a Marine for 24 years.

Because he was so good, he went on to train others as a marksman. England even taught Carlos Hathcock, another one of the deadliest snipers in the US.

England served during the Vietnam War and was a sniper in the third marine division.

Because of his skill with the sniper rifle, he is known as the phantom of Phu Bai. in fact, there is a book about him with the same title.

Here’s a great interview with him from 2017:

Simo Häyhä was not with the United States during World War II, but it is impossible not to discuss Simo Häyhä when debating the deadliest snipers in US history.

During World War II, Simo Häyhä was a sniper for Finland, and Finland was an ally to the United States.

Häyhä was winning shooting competitions well before joining the military at age 17.

He served as a sniper in the Finnish Army. He is known to dress entirely in white and lay motionless on the winter landscape waiting for his enemy.

Häyhä earned the nickname ‘White Death’ because of his winter camouflage.

During this time, the Finnish Army was not keeping track of kill counts. Häyhä kept track of his own count and documented it after the war.

Also, his count does not include any kill that had more than one sniper shooting.

Furthermore, if a kill was done with a machine gun, Häyhä did not count it.

Lastly, Häyhä’s kill count happened over the course of 100 days, with an average of five each day.

Also, his weapon was bolt action.

His kill count is around 500, and there have been multiple collaborations with the men who served with Häyhä to confirm this number.

He ended his military career with four tours during the Iraq war and is well-decorated for his courage and heroism during combat.

Chris Kyle is from Texas and grew up hunting with his dad.

After graduating in the early 1990s, he became interested in joining the marines. However, a Navy recruiter talked him into considering the SEALs, instead.

The Pentagon has confirmed Chris Kyle’s kill count to be more than 150.

Chris Kyle used more than one weapon in the field, including the 7.62 NATO MK11 sniper rifle and the MK13 mod 1, to name just two.

Kyle and a friend were shot to death outside a shooting range in Texas. The man who killed them both had PTSD and schizophrenia.

12 Most Famous US Marines 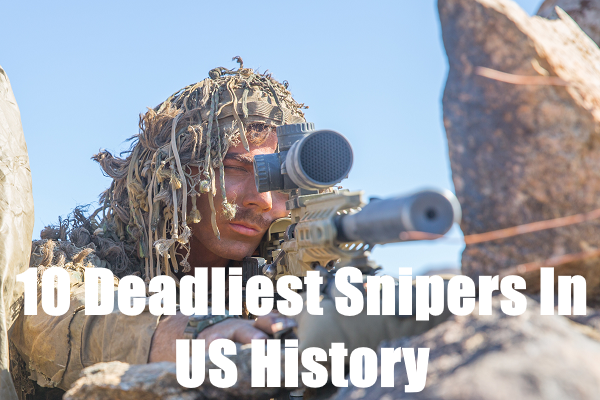 See our list of the 10 deadliest snipers in US history. The list includes famous and well known ones like Chris Kyle and Carlos Hathcock, and some lesser known ones.