With all the stories floating around the internet bringing up past curiosities, some people wonder if the rumors are true. For instance, you might wonder did Pepsi really have a Navy.

Well, it is true. Pepsi certainly did have its own Navy, and the story itself is pretty interesting.

The story begins in 1959 when President Nixon went to the Soviet Union and used a Pepsi to calm a conversation gone bad.

Did Pepsi Really Have A Navy?

In the 1950s, the Soviet Union’s borders opened after Stalin died and Nikita Khrushchev took over.

Khrushchev was a lot more liberal than Stalin, and he wanted citizens of the Soviet Union to travel and experience the world.

Therefore, Khrushchev set up an American National Exhibit and invited the Americans.

Naturally, we took them up on it, and in 1959 Nixon set out to show off how well capitalism is working out for the United States.

Therefore, Nixon gathered up a bunch of art, current technology, and anything else they could think of to showcase the variety and how good American’s had it.

Remember, the United States was trying to woo the communist Soviet Union with capitalism.

One driving force was to get some trading happening.

Therefore, the Americans made sure to bring a ton of products from companies here in the United States to entice those in the Soviet Union.

The person who ran Pepsi at the time really wanted in on that deal, so he talked to Nixon about ensuring Khrushchev ended up trying Pepsi.

During the Exhibition, Nixon and Khrushchev exchanged some words defending both capitalism and communism.

This heated conversation took place in the kitchen area of a model home Nixon brought along, so it is called the ‘Kitchen Debate.’

At this point, Nixon brought Khrushchev over to get a Pepsi to smooth things over.

The original deal was that for every Pepsi bottle, the Soviet Union would trade a bottle of vodka.

What could go wrong?

While that worked out well at first, it seems the Soviet Union really liked their Pepsi.

However, the vodka was not doing well here in America, which is a bit of a shock.

Therefore, Pepsi had to work something out to make the deal more lucrative.

In the late 80s, Pepsi and the Soviets reached a solution.

The Soviet Union gave Pepsi a Navy consisting of 17 submarines, a destroyer, and a frigate.

The National Security Advisor for the United States was not pleased with Pepsi.

Still, the way Pepsi looked at it, they were disarming the Soviet Union faster than the politicians could, so it was a win.

Eventually, Pepsi decided to hire the Soviet Union to build them oil tankers in exchange for a whole lot of Pepsi products.

At that time, Pepsi was still trying to make some good money over the whole agreement, and it was not going very well.

Did the Pepsi Navy Ever Go to War?

While Pepsi may have been poised for a game of battleship at that moment, they never went to war.

They did, however, go to war to get back and reclaim their assets.

Then, the Soviet Union became broken into separate states, and there was still a lot of corruption.

Now Pepsi is arguing with the different states within the Soviet Union, and only some Russian states were willing to work with Pepsi.

So, while Pepsi was trying to work things out, the Coca-Cola company sees an opportunity in the chaos.

Coca-Cola heads over to Russia to get their toe in the door, too.

Then, Coca-Cola bought factories in Russia and did some fantastic marketing to get Russians to like Coca-Cola over Pepsi.

Pepsi didn’t necessarily use their ships in a battle, but there was a war nonetheless.

Naturally, the internet loves a story this good, and the memes abound, like this one from Reddit. 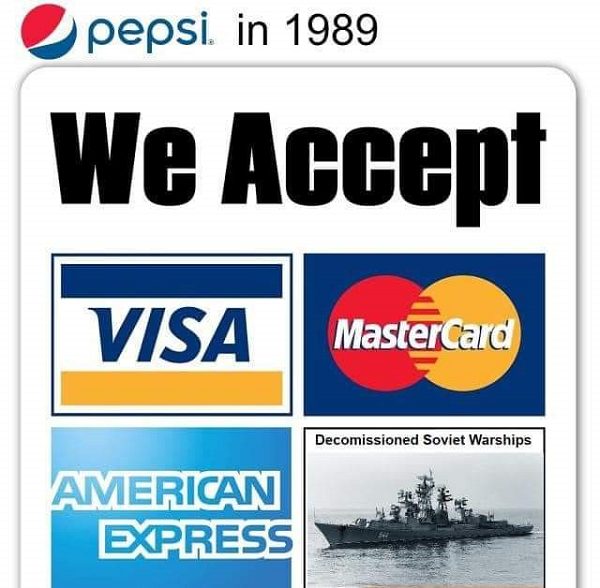 This meme from Imgur really sums up the impossibility of the story.

Let’s not forget the war between Coca-Cola and Pepsi. 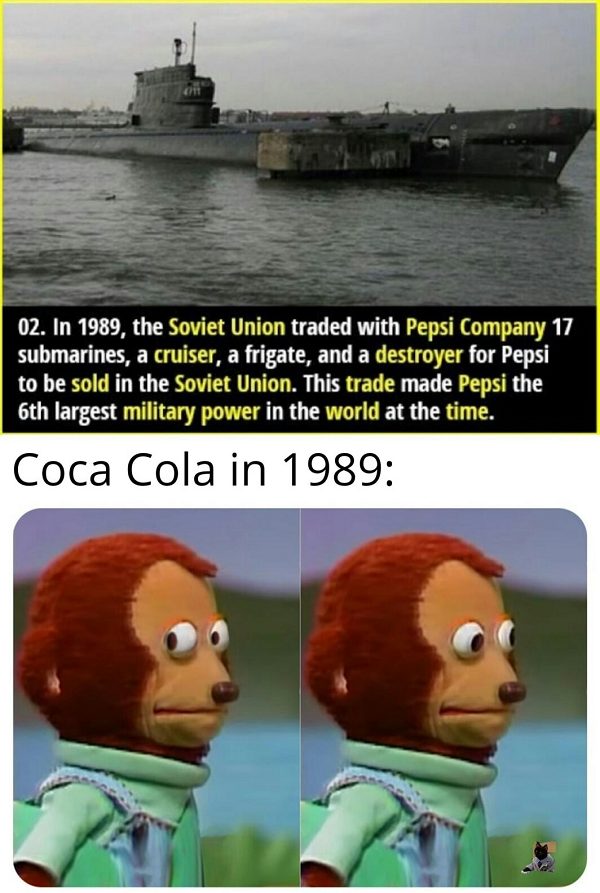 If you were wondering if Pepsi really did have a navy, the answer is yes.

Also, the series of events unfolded in such a way to make the story seem impossible, yet it occurred.

The United States saw an opportunity to convince the Soviets to take a good look at capitalism.

At the same time, Pepsi saw an opportunity to get a Pepsi in the hands of potential customers in the Soviet Union.

While everything went well at first, Pepsi needed to revamp the agreement, so the Soviets traded off warships.

Pepsi, for a moment, owned the 6th largest navy in the world, but they sold the ships for scrap metal.

The battle continued, however.

Pepsi was still working to recoup its losses, and the Soviet Union collapsed.

At the same time, soda rival Coca-Cola saw an opportunity to join the fray and get their foot into the Russian soda market. 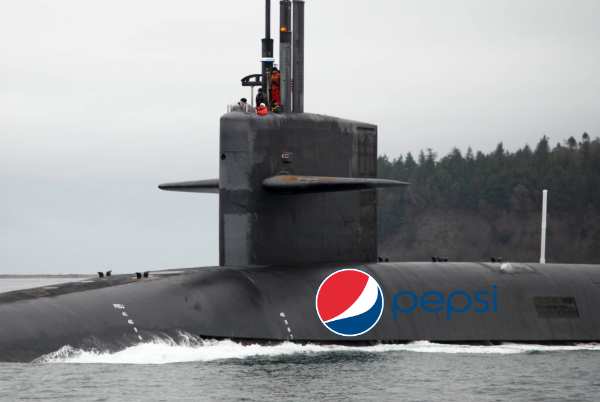 Believe it or not, Pepsi had the 6th largest Navy in the world at some point! Find out why this was the case, and whether or not they ever went to war.