The United States Marine Corps (USMC) is a herald and prestigious branch of the military for many reasons.

It consistently produces some of the strongest and toughest warriors in the world.

However, there is also a running joke and stereotype about Marines – they like to eat crayons.

Find out more about this strange yet humorous trend within the U.S. Armed Forces.

Origin of Marines and Crayons

The U.S. Armed Forces are composed of several different branches each with its own reputation and personality.

These rivalries tend to produce stereotypes about the other military branches.

For example, Navy sailors get teased for being soft while airmen have a reputation for being lazy.

Marines, on the other hand, are often given s**t about their education level.

The Marine Corps crayon-eating trope is arguably the most well known of all the modern branch stereotypes in the military.

There are multiple Reddit threads and Quora posts that address the topic.

A former Marine even started a new company selling edible crayons to take advantage of the trend.

The origins of associating Marines with snacking on the favorite delight of a 3-year-old is not totally known albeit humorous.

Marines snacking on crayons has sparked a wide range of funny memes (more, below) and inside jokes.

In addition to other branches giving Marines a hard time about their level of intelligence, it is also a way service members tease each other within the USMC.

Why do Marines have a reputation for being stupid?

While no one would disagree with the toughness and mental strength of Marines, some argue that their “dumb” attitude derives from the so-called brainwashing within the branch.

Marines are extremely proud of their heritage and the herd mentality of the branch often helps contribute to the outside assumption that Marines are dumb.

However, some Marines argue that members of the U.S. Army are more worthy of the “eating crayons” association.

Nonetheless, internet sensations are difficult to ignore and the wide range of hilarious Marines eating crayon memes has only helped fuel the stereotype.

It is common within the different branches of the military to have friendly rivalries that feature a wide assortment of stereotypes, some more true than others.

After years of facing ridicule for being the most illiterate of all the branches, most Marines have accepted their connection to eating crayons.

The vast majority of Marine eating crayon jokes are made in good faith.

Most service members see inter-service jokes as an opportunity to tease and break the ice when meeting individuals from other branches.

Often, these jokes target the popular misconceptions about the branch and sometimes serves as a source of pride.

While most people don’t like being connected to stupidity, the rationale behind Marines eating crayons is child-like and innocent in many ways.

Some argue that Marines got this reputation for their common use of the unflattering term “Jarhead” used outside the branch.

Marines pride themselves on being the first to fight which some outside observers claim leads to a foolhardy approach within the branch.

Furthermore, Marines have very strict clothing standards and other regulations that seem trivial to others, even other military branches.

Meanwhile, others like to poke fun at the low ASVAB admission standards for Marines even though the Army technically accepts people that perform lower on test scores.

Regardless, calling a Marine a crayon eater is the most popular way to insult their intelligence.

Marines do not have the same reputation as service members of the Air Force and Navy.

Service members in those branches generally need a more sophisticated education background to serve the country.

However, that is not to suggest that all Marines are stupid or like to eat crayons.

Marines may be misunderstood like other military branches and creating stereotypes is often a fun way to tease each other through inter-service rivalries.

The relentless dedication and unwavering loyalty of Marines have created a misconception that they are slow, dumb super-soldiers that know nothing other than warfare.

Of course, this is far from the truth as getting into shape and surviving the Marines is challenging enough.

Nonetheless, most Marines accept their association with being crayon eaters and generally don’t take offense.

The stereotype has become so popular that there are many funny memes you can find on the internet:

Surviving the U.S. Marine Corps is no small task.

Nonetheless, Marines get teased frequently about their lack of intelligence along with the U.S. Army.

It has contributed to a popular new meme that links Marines with eating crayons.

It’s not true of course, yet is a unique way for service members of other branches to poke fun at the “meathead” mentality of the Marine Corps. 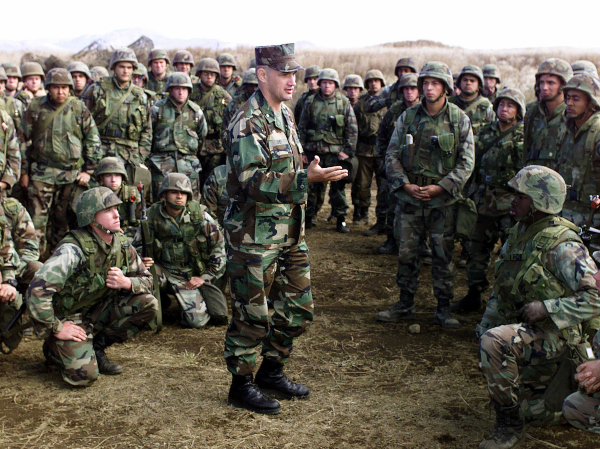 The Marines and Crayons meme has been making the rounds on the internet for quite sometime now, but is it really true? OMK dives deep into the Marines eating crayons lore.