More importantly, it keeps our nation safe and secure from terrorist threats.

What are the Force Protection Levels (FPCON)?

The Department of Defense (DoD) implemented FPCON as a threat awareness system.

In other words, the force protection levels in the system are not linear and therefore do not progress up in sequential order.

Rather, the FPCON status is designated and implemented when conditions warrant.

In general, FPCON Normal is the lowest/safest status of the force protection levels.

FPCON DELTA is the only status that may refer to a specific known threat under the force protection levels.

Force Protection Condition Levels (FPCON) was formerly referred to by the military as THREATCON.

It’s important to note that FPCON is not the same as the DEFCON awareness system.

DEFCON focuses against threats to the United States while FPCON monitors threats to military installations and operations.

For this reason, multiple FPCON levels exist depending on the base and its location, or military operation and variables.

The commander of the U.S. Northern Command determines the minimum force protection level for every military base in the United States.

USNORTHCOM establishes the force protection levels for many other military installations in North America.

Meanwhile,the U.S. European Command and U.S. Southern Command are responsible for their regions of responsibility.

Nevertheless, all military installations must adhere to the minimum FPCON level determined by USNORTHCOM.

Those seeking to find the latest FPCON conditions for any U.S. military base should check the official website.

These force protection levels are enforced for military installations in the United States as well as around the world.

Thus, it’s crucial to understand each FPCON level and what it entails for security purposes:

As a result, FPCON Normal is the lowest of the force protection levels in terms of danger/security risk.

The Department of Defense generally assigns FPCON Normal during peacetime.

It describes a situation of no perceived global or terrorist threat with routine security warranted.

Thus, no security concern is expected yet personnel should always remain vigilant.

There are situations when force protection levels are upgraded to an enhancement status (+).

The enhancement status indicator designates that further safety measures may be required than the standard guidelines of the FPCON.

Its the next status up from FPCON Normal in terms of a perceived threat/danger level to military base security.

In general, there is an overall threat of violence in the region but nothing that indicates the base/operation is compromised.

Those visiting a military base will notice an orange FPCON Alpha sign at gated entrances to indicate this force protection level.

Those stationed at the military installation are usually instructed to notify family members of the increase in FPCON.

FPCON Alpha+ is a security enhancement often seen to increase procedures from the standard protocol (yet prevents jumping to the next level, FPCON Bravo).

FPCON Bravo describes a situation with a somewhat predictable threat of terrorist activity.

The key word is “predictable” as probable violence may occur in the area.

However, nothing indicates that the violence is directly connected or targeted toward the military installation.

The security measures taken by the military base may impact the activities of local law enforcement as well as the general public.

The presence of more guards will include patrols to verify safety of the military establishment.

The DoD informs military personnel of FPCON Bravo with a blue sign posted at entrances and doorways.

Military families traditionally receive updates when a military base is increased to FPCON Bravo.

It’s important to keep cars and objects away from buildings to help security forces clear the area.

FPCON Charlie is a serious danger and threat to the military base.

It represents a dramatic increase in terrorist activity that is not necessarily occurring nearby.

FPCON Charlie is traditionally assigned after a global terrorist attack has occurred.

Consequently, strong security measures are required to keep the military base or operation free from danger.

Be that as it may, operations are generally stalled due to rigorous efforts to inspect vehicles and facilities.

Thus, you can expect to need to present at least 2 forms of IDs to gain access to the installation.

Additionally, you should expect certain traffic routes to be restricted around the base.

Security checkpoints are heavily patrolled by troops that are called to temporarily guard entrance points.

Family members of military personnel should receive updates of the situation once military bases are increased to FPCON Charlie.

Finally, FPCON Charlie suggests that military families should consider escorting children to and from school.

FPCON Delta – the 5th and most serious of all force protection levels – is specifically reserved for unique situations.

As a result, unlike FPCON Charlie, the force protection level involves an ongoing and nearby terrorist attack.

The Department of Defense reserves assigning FPCON Delta to military installations that are vulnerable to attack (or are currently being attacked).

September 11, 2001 – for example – was a day when all military installations were put into FPCON Delta.

When a military base is placed FPCON Delta entrance is restricted to active-duty troops and authorized personnel.

There are mandatory security measures implemented to keep the military installation secure and protected.

The most serious FPCON level is indicated by a red sign posted at military building doorways and base entrances.

FPCON Delta requires service members and families to limit movement during this level of threat.

Moreover, several facilities and services will be limited or closed while under FPCON Delta.

The primary difference between FPCON Charlie and FPCON Delta, is that the latter is reserved for a specific, known threat.

Whereas FPCON Charlie is the most appropriate of all force protection levels when a general, non-targeted, imminent threat exists.

Lastly, FPCON Delta is generally only maintained for days until the threat lowers to the level of FPCON Charlie.

The different force protection levels indicate a degree of dangerous to the military installation.

Its designed to support yet not replicate DEFCON, which is a threat awareness system that monitors direct security risks to the United States.

Force protection levels inform military personnel of what type of security measures they should expect at gated entrances and moving around the base.

Meanwhile, FPCON Delta, represents a direct threat to the military base and interferes with normal operations.

Military personnel and visitors should expect delays as well as random ID checks and searches. 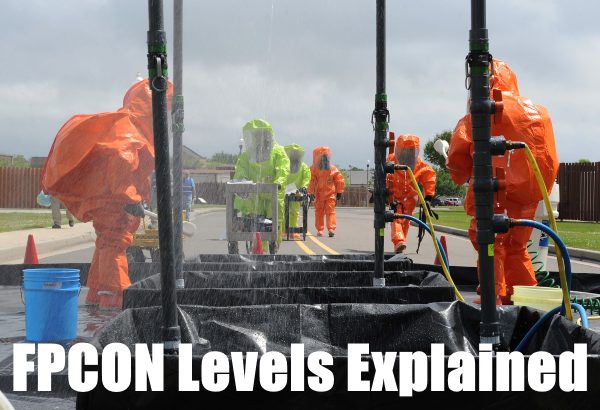 Force Protection Levels (FPCON) notify military personnel of the current security threat/risk at the military base. Learn about the levels.