The Basic Allowance for Housing (BAH) is designed to make housing affordable for you and your family.

Honolulu is the largest city in Hawaii.

For this reason, its the primary hub for business, finance, and hospitality.

Honolulu also houses the largest military complex of any region along the Hawaii islands.

It’s home to Pearl Harbor which is still active despite being targeted in the Japanese aerial assault that launched the United States into WWII.

Today, the harbor remains a significant naval base as its host to the U.S. Pacific Fleet – the largest naval command in the world.

The military bases near Wahiawa and Waimanalo, include:

Meanwhile, the military bases in Oahu/Wahiawa include:

The following Hawaii BAH rates are paid in monthly installments.

The amount you receive depends on military rank and whether or not you have dependents.

Florida BAH rates for Honolulu County are as follows:

Learn more about the military bases situated along the Hawaiian islands.

Kauai, or the “Garden Isle”, exists northwest of Oahu across the Kauai Channel.

The island is renowned for its wilderness including Waimea Canyon State Park and Na Pali Coast State Park.

The facility is near an isolated portion of the island called Kekaha.

Maui is the second-largest of the Hawaii islands.

Military housing is also more readily available since it ranks 3rd in population behind Oahu and Hawaii Island.

Families appreciate the vast commercial options for shopping and dining.

Thus, there is a sizeable United States Coast Guard presence on the island.

Hawaii BAH rates for Maui are as following:

Hilo is located on the main island of Hawaii.

Despite being the largest island it surprisingly houses only 13% of Hawaii’s overall population.

Additionally, The Big Island is home to the Pohakuloa Training Area.

The training area is the largest Department of Defense (DoD) installation in Hawaii.

It features Bradshaw Army Airfield and has origins that date back to World War II.

Hawaii BAH rates for Hilo are fair where housing is rather affordable: 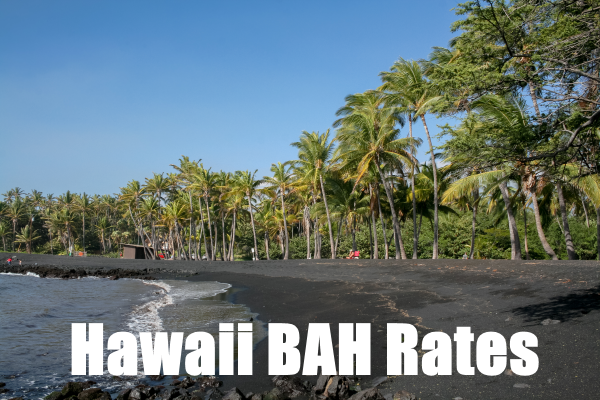