The U.S. military utilizes a tour of duty system to rotate personnel to various locations, serving different functions as a means of fulfilling missions and allowing service members a broader experience.

This system enables efficiency and organization in terms of each branch of the Armed Forces and its resources—including service members.

All military personnel are eligible for a tour of duty, depending on their unit, position, military occupational specialty, and many other factors.

Here is an explanation of how long a tour of duty is in the military.

What Is Considered A Tour Of Duty In The Military?

A military tour of duty (TOD) refers to a period of time in which personnel from one or more of the Armed Forces branches are deployed or stationed outside the U.S., usually overseas.

This typically means that service members are temporarily relocated from their base to a different region.

Such regions are generally located in another country and frequently in areas of combat or hostile environments.

Tours of duty set up a method for rotating military personnel so that human resources are not over-stretched in these conditions.

Qualified personnel for a military TOD must complete basic training within their branch.

They must also undergo any additional unit or individual training that is required.

When service members are not assigned to a tour of duty, they perform their jobs and duties at the post or base where they are stationed.

How Long Is A Tour Of Duty?

In the U.S. military, the length of a tour of duty depends on the branch of the Armed Forces, the reason for deployment, location of tour, and mission of the unit.

Each military branch requires different time spent “in the field” which means active training and/or undertaking an active mission.

For example, certain branches such as the Army may face more active combat situations than members of the Navy.

Therefore, the duration of tours of duty vary between the Army, Air Force, Navy, and Marine Corps.

Different military branches and their sections determine the timing of a tour of duty.

Related Article – Which Branch Of The Military Should I Join?

A tour of duty in the Army is typically between 6 and 12 months, though in some cases it is extended to 15 months.

Deployment tours are dependent on the needs and demands of the Army.

In general, soldiers are eligible for two weeks of leave, known as “R&R” (rest and relaxation), after six months of deployment.

If a soldier is assigned an “accompanied” tour of duty overseas, in which dependents and family members go along as well, the time period can be as long as 36 months.

Soldiers with dependents that serve “unaccompanied” tours overseas, in which family members do not go along, are usually in-country for 12 months.

Single soldiers (with no dependents) that are assigned to places such as Europe or Japan typically spend 36 months in tour duration.

In the Navy, a tour of duty indicates the period of time spent at sea, performing operational duties.

These duties may include:

A naval tour of duty is part of a rotation that may include a six-month tour on a ship at sea and one month for maintenance in home port with time for training and/or exercises.

Then, there is usually a return to tour of duty at sea for another 6 months.

Most overseas tours for members of the U.S. Navy are limited to two or three years.

However, for naval military personnel assigned to Japan, Guam, and some other areas, tour lengths may last as long as four years.

In some cases, sailors that extend their tour of duty by a year may receive preferential consideration for their next location.

This incentive is offered to enhance the strength and stability of naval forces.

A typical tour of duty for Air Force pilots is four years, though the duration can differ depending on their role in the field.

Pilots may take part in combat missions, surveillance, base duties, and providing air support to Navy and Army units.

Marine Corps service members typically experience tours of duty between 6 and 12 months, depending on the type of mission.

A deployment for a Marine Air-Ground Task Force lasts up to 6 months and is mission-specific to establish overt U.S. military presence in certain areas.

Marines can also be assigned a tour of duty as an Individual Augmentee.

This takes place when a service member with specific skills is sent to join another military operation for up to 12 months.

Units of Marines can also deploy for combat operations.

In these cases, the tour of duty duration is dependent on the military’s needs in engagement with enemy forces.

In addition to a service member’s branch, there are other factors that influence how long a military tour of duty may last.

Since many TODs are spent in hazardous and/or unfriendly areas, away from family and comforts of home, the pressure and toll they take on military members can be significant.

This is why the military coordinates rotating of personnel as effectively as possible.

The goal is to avoid exhaustion and other risks involved in constant action, and to attempt to preserve mental and physical health.

Individual service members may face longer or more frequent TODs depending on their experience and expertise.

Depending on the roles that military personnel play in the field, as well as the amount of stress and pressure they face, some tours are longer than others.

Other influential factors include:

Additionally, the reasons for deployment and the location are influential factors that affect the duration of a tour of duty.

For example, active combat missions are generally shorter than tours of duty for the purpose of training exercises or peace-keeping missions.

Related Article – How To Switch From Reserves To Active Duty

Different branches of the U.S. military assign various tours of duty of different duration, depending on many factors and circumstances.

When a military tour of duty is concluded, the service member is generally assigned to a regular duty station or post.

In addition, the service member is ineligible for another tour of duty for a certain period of time.

This ineligibility allows for a break, and recovery, from the intense pressure and action faced by military members that are associated with many deployments and overseas tours. 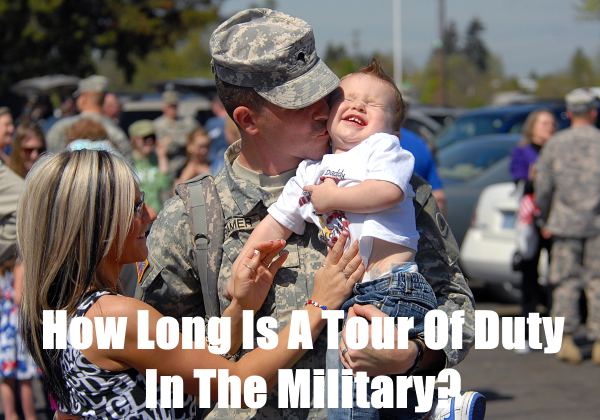 Learn more about what a tour is in the military, including how long a tour is considered in each branch.