The JAG Corps was founded in 1775, with the mission of representing legal interests of individual soldiers and the U.S. Army as a whole.

Army lawyers serve their country and fellow service members as part of their branch of the Armed Forces with commitment, courage, and expertise in legal matters.

Here is an overview of how to become a lawyer in the Army.

Those who wish to become a Judge Advocate in the U.S. Army must meet certain requirements.

This is necessary for people who are studying to be a lawyer and even those who are already practicing law.

Judge Advocates do not participate in Army basic training as enlisted soldiers do.

DCC is a course designed to prepare participants to serve as officers through a six-week intensive training schedule of physical, weapons, and leadership skills.

Upon completion of the DCC, candidates attend the Judge Advocate Basic Training Course.

This is a ten-and-a-half-week course that combines classroom instruction and practical exercises.

In addition, this training course immerses candidates in military law so they can learn all aspects of the JAG Corps and its organization, mission, and function.

Like all members of the Army, military lawyers must meet height and weight standards and pass the Army fitness test.

After completion of the Judge Advocate Basic Training Course, JAG officers will report to an Army law office to begin practicing law.

Specific Steps To Become A Lawyer In The Army

For those who wish to become a lawyer in the U.S. Army, there are specific steps that must be taken.

If you are a U.S. citizen and under the age of 42 at the time of becoming a commissioned officer, then you are considered a valid applicant to begin the process of becoming an Army lawyer.

In addition, you will need to pass all Army fitness requirements in addition to security clearance.

This security clearance consists of an investigation of your history, including finances, health, and substance abuse.

Here is an overview of the full process and steps to become an Army Judge Advocate:

To attend law school, a bachelor’s degree is required.

However, any major and/or set of classes is permitted as long as the college/university is recognized by the U.S. Department of Education.

Most military lawyers tend to earn degrees in liberal arts so they have a strong foundation in education.

A foreign language focus is often beneficial as well.

In addition, college ROTC programs are often excellent avenues for those interested in learning about the military and receiving tuition help.

However, it’s more common for candidates to complete OCS first so that they can enter the Army as a commissioned officer.

The LSAT (Law School Aptitude Test) is an exam taken to qualify for law school.

The exam lasts for 175 minutes and includes 5 multiple choice sections that cover such skills as:

The LSAT is offered multiple times per year at different locations throughout the U.S.

Most people invest a great deal of time and effort in studying for this pre-entrance exam to law school, since it is incredibly important in terms of admissions.

In addition to performing well on the LSAT, entering pre-law programs, summer internships, and graduate law programs can give candidates a competitive edge.

In fact, the Army offers an internship opportunity for those interested in a JAG career.

Candidates must attend a law school that is approved by the American Bar Association (ABA)  and earn a law degree.

This will allow law school graduates to take the bar exam in any U.S. state.

Since earning a law degree is not sufficient for becoming a bar member or licensed attorney, candidates must pass the bar exam.

Passing the bar exam leads to becoming licensed to practice law within a particular jurisdiction.

The Uniform Bar Examination (UBE) is a standardized bar exam created by the National Conference of Bar Examiners.

The purpose of the exam is to test the candidate’s knowledge and skills required for being licensed to practice law.

Multiple jurisdictions accept the UBE, though some may require applicants to meet additional education requirements or complete other exams.

Each jurisdiction sets its own passing score for the UBE, and each state ultimately determines requirements for practicing lawyers.

Most candidates prepare for and take the bar exam in the state where they attended law school.

The exam lasts for 2-3 days and includes questions regarding the following subject areas:

Applying For The State Bar

Applying for the state bar includes passing a security clearance through a check of the candidate’s background and references.

This requires disclosure of information regarding criminal records, taxes, etc.

Fingerprints must also be submitted and registrations fees paid.

Once completed and approved, candidates are administered the oath for new attorneys by an official during a state swearing-in ceremony.

The Army accepts applications for the JAG Corps once per year.

Once a candidate is accepted and has undergone the appropriate training, their active duty service as a lawyer in the Army will begin.

Does The Army Provide Tuition For Law School?

The Army offers the Funded Legal Education Program (FLEP) to cover the cost of law school for up to 25 officers and non-commissioned officers on active duty each year.

Those that participate in FLEP are required to attend a qualifying law school.

This means attending an in-state school or one that offers in-state tuition to military service members.

FLEP participants are expected to serve in the JAG Corps upon graduation.

Those who have completed law school and serve as a JAG officer on active duty may qualify for a significant amount in student loan repayment from the Army.

Being A Lawyer In The Army

For example, an Army lawyer may provide legal assistance and/or representation on behalf of Army personnel.

Duties fulfilled by Army lawyers include legal counsel and advice, such as for trial preparation, post-trial events, and everything in between.

Other areas of expertise for Army lawyers include:

The most common cases undertaken by Army lawyers are those that concern military offenses, court-martials, and landlord-tenant disputes.

Benefits Of Becoming A Lawyer In The Army

Becoming a lawyer in the Army offers benefits just as being an attorney does in the civilian sector.

In addition, being part of the U.S. Army offers many significant benefits such as:

Experienced Judge Advocates can attend this school for an academic year to earn an ABA-approved Master of Laws (LLM) degree in military law.

Senior Judge Advocates can earn a civilian LLM in specific legal fields, with tuition and costs paid for by the Army.

Overall, becoming a lawyer in the Army through the JAG Corps requires a great deal of education and training.

However, Army Judge Advocates are part of a legacy of service to soldiers, the Army, and the nation.

Whether they commit to serving for four years or more than twenty for full retirement, members of the JAG Corps are integral to their branch of service and hold a unique career in the legal profession. 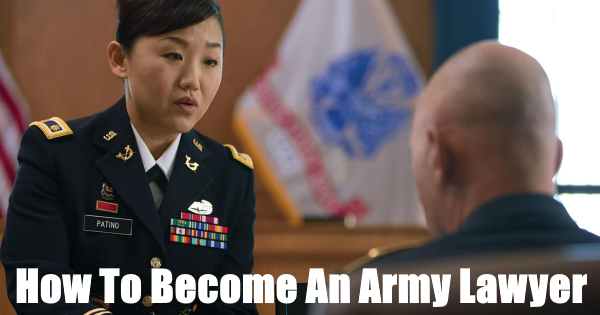 Learn more about becoming a military lawyer in the US Army, including the basic requirements, training, and specific steps to launch your career.