Anyone who has served in a branch of the U.S. Armed Forces will tell you that it’s not an easy experience.

Military service demands commitment to a lifestyle that is often tough, stressful, and potentially dangerous.

However, each branch of the U.S. military is unique, making some easier to join than others depending on certain circumstances.

Here is some information regarding some of the “easiest” military branches to join.

Related Article – Which Branch Of The Military Should You Join?

Though there are a multitude of factors to consider, most agree that the easiest military branch overall is the Air Force.

Though the Air Force is certainly not the easiest military branch to get into, once you have joined, it is likely that you will find the Air Force to be an easier career experience compared to the Army, Navy, Marine Corps, and Coast Guard.

Here are a few reasons to support this assessment:

In addition to the usual benefits that come with a career in military service, such as job security, medical insurance, retirement options, educational opportunities, travel, and more, the Air Force offers a unique experience.

This experience can reduce many of the tremendous stressors that come with serving in the military, making the Air Force a bit easier than other branches for those who join.

Some examples of the Air Force’s unique experience are:

Another unique aspect of serving in the Air Force is the ease with which airmen can earn an associate degree from CCAF.

In addition, airmen can take general courses at their base education center as well as unlimited CLEP tests for free to earn college credit.

The ease of earning your Associate’s Degree in the Air Force enhances your opportunities for promotion as well as education.

Of course, it’s essential to bear in mind that most people who decide to serve in the U.S. military are not seeking the easiest military branch overall.

The decision to serve is based far more on available opportunities, experiences, and many other factors.

Related Article – Top 15 Military Colleges In The US

Easiest Military Branch To Get Into

When taking into account a number of elements, the military branch considered easiest to get into would be the U.S. Army.

Here are few reasons why this is the case:

Each branch of the military requires you to take a test called the Armed Services Vocational Aptitude Battery, or ASVAB for short.

Among other things, the test measures basic concepts and skills to determine a person’s strengths, weaknesses, and potential success in verbal, math, science and technical, and spatial subject areas.

The AFQT (Armed Forces Qualification Test) score, derived from the ASVAB, is what military branches use to determine eligibility for enlistees.

The highest score possible for the AFQT is 99.

While the US Coast Guard requires a minimum AFQT score of 40, the Army only requires a score of 31.

Most Forgiving Of Your Past

Another aspect to consider when determining the easiest military branch to get into is your background.

Each branch of the military conducts a background check on their future soldiers, sailors, airmen, and Marines.

This security clearance is designed to ensure that military members meet standards and conduct of moral character.

Therefore, factors such as trustworthiness, emotional stability, financial responsibility, and criminal activity are investigated—usually within the past 10 years.

If you have a criminal record, it may be quite difficult to join some branches of the military.

Of course, depending on any arrests and the severity of criminal charges, some minor offenses may be waived.

This is especially true if there is a higher demand for military personnel.

Since it is the largest branch in the U.S. Armed Forces and generally requires more members, the Army routinely provides waivers to those that have misdemeanors in their past.

With the lower minimum AFQT score requirement and a greater likelihood of waiving past minor offenses, the Army is considered the easiest to get into in terms of military branches.

Related Article – Can You Join The Military With A Felony?

Though boot camp / basic training is considered challenging, yet mandatory, for every branch of the military, the easiest among them would most likely be the Air Force.

Here are some reasons to illustrate this case:

Each service branch organizes their own basic training schedules, programs, and requirements.

In addition, there is variation among boot camps in terms of difficulty, duration, and intensity.

For example, the Army’s Basic Combat Training is a 10-week program in which recruits face the following:

Recruit Training in the Marine Corps lasts for 12 weeks, ending with a 54-hour field survival challenge.

The Air Force boot camp programs are also considered less intense than the other branches, though physical and mental health strengthening are an integral part of basic training.

Recruits also learn about the history of the Air Force along with field training in combat scenarios.

Though none of the branches’ basic training courses would be categorized as easy, by comparison, the Air Force program lasts a shorter amount of time and is considered less rigorous.

Though females can join any branch of the Armed Forces, the U.S. Air Force is considered to be the easiest for females.

Here are some reasons to support this:

It’s important to acknowledge that women make up the minority of all members of the military.

However, all MOS (military occupational specialties) are open to females.

Therefore, choosing which branch to join as a female service person should be much more dependent on the position and experience desired rather than determined by gender concerns.

Easiest To Become An Officer

The U.S. Marine Corps provides the easiest path to become an officer.

All branches of the U.S. Armed Forces allow the possibility for an enlisted service member to become a commissioned officer.

This is achieved through Officer Candidate School (OCS), though specifications vary depending on your branch of service.

Most enlisted service members are required to have a four-year college degree to be recommended for OCS.

Here is a breakdown, by branch, of the path requirements from enlisted military membership to the rank of officer for comparison:

A bachelor’s degree is required for most enlisted midshipmen seeking to attend OCS for 12 weeks at the Naval Station in Newport, Rhode Island, and graduate with an ensign rank.

However, enlisted Navy members can compete for a Limited-Duty Officer commission without a degree.

This is only available to those considered to have superior technical expertise.

To become a commissioned second lieutenant as a graduate of the nine-week OCS course at Maxwell-Gunter Air Force Base in Montgomery, Alabama, enlisted airmen must meet the following requirements:

To become a commissioned second lieutenant as a graduate of the Army’s 12-week OCS at Fort Benning, Georgia, enlisted soldiers must meet the following requirements:

To enter the 10-week OCS at the Marine Corps base in Quantico, Virginia, and graduate as a second lieutenant, an enlisted Marine must be between 18 and 27 years old.

They must also pass a physical examination.

However, unlike fellow military branches, a bachelor’s degree is not always required for Marine Corps members.

The Marine Corps offers an Enlisted Commissioning Program that is open to active-duty members with the rank of sergeant and above, as long as they have earned at least 12 college credits.

Overall, in terms of requirements, the U.S. Marine Corps offers the easiest path for enlisted members to become an officer—especially in terms of possessing a bachelor’s degree. 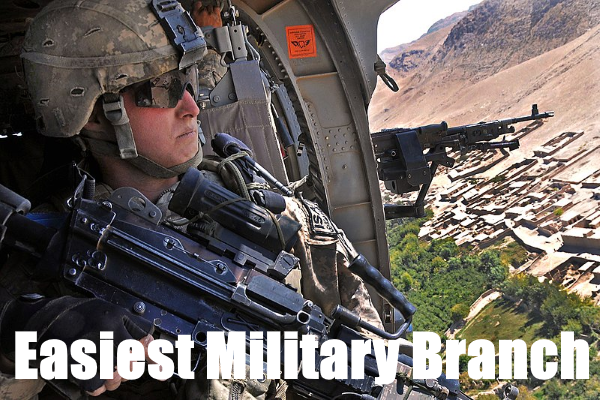 Learn more about which branch of the military is the easiest in terms of boot camp, easiest for females, easiest to become an officer, and more.