Are you planning to enlist in the United States Marine Corp?

Do you want to be a part of the world’s greatest amphibious assault team?

If you answered “yes” to both questions, then you may want to take a look at the schedule of everything that will be going on while you attend the Marine Basic Training or Boot Camp.

This program is 13 weeks in length, and it is one of the most physically and mentally demanding basic training programs in the United States military.

The Marines are one of the first lines of defense when America’s freedom is at stake.

If you are in the DEP or a parent of a Marine enlistee, you can also read through this schedule so you know what will be going on during boot camp on the hallowed grounds of Parris Island, South Carolina, or San Diego, California.

Marine basic training brings in many of the confused volunteers and sends them out as Marines that are sworn to defend the United States at all costs.

Before we get into the week by week schedule, let’s explain the phases of Marine Boot Camp:

Related Article – What To Bring To Marine Boot Camp

What are the phases of Marine Corp Boot Camp?

Let’s take a brief synopsis of what will happen during these phases:

This is where the new enlistees arrive. They will go through a whirlwind of in-processing and testing to ensure that they are prepared for the weeks of training ahead.

They will meet the team of drill instructors that will stay with them throughout basic training.

During this phase, they’ll learn about hand-to-hand combat and spend a lot of time in the classroom learning about the history of the military, customs, courtesies, and more.

The end of phase one will be capped off with Swim Week, which will be one of the most physically challenging parts of Marine Boot Camp.

Related Article – How to Prepare for the USMC Swim Qual

From weeks 5 to 7, it will represent phase two of the Basic Training.

The first week will be dedicated to team training and working together.

Weeks six and seven will be dedicated to marksmanship where Marines will learn how to familiarize themselves with their rifles and be able to hone their shooting skills through various targets.

During this phase, you’ll go through Basic Warrior Training and the legendary field event known as The Crucible.

At this point of Boot Camp, you will be putting everything you’ve learned so far to the test. The final challenge is where the real fun begins.

This is where you will earn your Eagle, Globe, and Anchors.

This phase is the final two weeks of Basic Training. They go through final administrative tasks followed by a graduation ceremony.

After graduation, and depending on their chosen MOS, they will move on to either Marine School of Infantry (SOI), or Marine Infantry Training Battalion (ITB).

After going through “Receiving Week”, the first week of Basic Training begins.

Most of the time, it will be physical training evaluations and classroom time.

In the classroom, you’ll learn everything from the history of the military, how to exchange courtesies, basic leadership skills, the Core values, customs, first aid, and more.

You will also begin your first segment of training with the Marine Corp Martial Arts Program (MCMAP).

You will learn basic hand-to-hand combat skills that will be useful in close quarter battles with those who are a direct threat to you.

This week will feature a continuation of classroom time, physical training, and more MCMAP.

At this point, you will also undergo medical and dental evaluations. You will also be taking part in your first hike, which is a 5k Hike.

You will also take part in CODs or close order drills. This is just another fancy term that can be translated into plain English: physical training.

At the beginning of the week, you’ll be going through the obstacle and confidence courses.

This is where the real fun will start to begin. You’ll also be undergoing Pugil Stick training and go through the gas chamber.

At the end of the week, you will go on an 8k hike and go through a Series Commander inspection (or SerCom).

Think last week was intense? You ain’t seen nothing yet. Welcome to Swim Week.

You’ll be spending a lot of quality time in the water during this portion of Basic Training.

If you know how to swim, you’ll be learning how to maneuver in shallow and deep waters.

Water survival is key when you are part of the world’s greatest amphibious assault team.

However, what if you can’t swim or fail the swim test?

You’ll be known as an “Iron Duck”.

If you don’t know how to swim, you should consider taking lessons before considering the idea of enlisting in the Marines.

Outside of the water, you’ll also be doing the usual classroom stuff and physical training.

Also, this will mark the final week of MCMAPs where you will undergo a test of everything you’ve learned during the training.

Welcome to Team Week. If you really want to see what makes the Marines one of the most dangerous fighting forces in the world, you’ll learn about why that is during this part of the training.

As a team, you will work together through various exercises.

You’ll also be going through the bayonet course. You will all learn to work together as a team so every member is mentally prepared for combat.

During this week, you will be issued new uniforms and equipment.

Picture day will fall on this week, so you will have photos taken so your family will proudly display it at home and take pride knowing a Marine is a part of their lives.

At the end of the week, you’ll also undergo a written exam of everything you’ve learned up to this point in your training.

You’ll learn about sighting in your rifle, firing positions, and sitting in the grass while using your rifle to your advantage.

Because the last thing an enemy wants to see waiting in the tall grass is a United States Marine with their finger on the trigger.

You will fire your gun in various positions including sitting, standing, kneeling, and prone positions.

Basic Warrior Training. This is where things will get dialed up to a higher level both mentally and physically.

You’ll learn everything from navigating by night, map reading, combat hunter training, and so much more.

It’s all about staying sharp and staying one step ahead of the enemy.

With training such as IED awareness as part of the mix, you really want to pay close attention during this part of BWT.

It can mean the difference between life and death for yourself and your fellow Marines.

The first week of “Testing Week” begins. You will undergo final evaluations for physical training.

You’ll also be tested on everything you’ve learned in the classroom as well.

This marks the 54 hour physically and mentally demanding test known as “The Crucible”.

By the time you have finished it, you’ll already have marched as much as 40 miles.

But that’s not all. You will be tested on everything you’ve learned in the field.

This is where the trainees build confidence in themselves and each other.

The true making of a Marine happens during boot camp.

But it’s The Crucible that will be the final confirmation for anyone who has what it takes to become a Marine.

This two week block will cover everything from financial responsibility to handling incidents of sexual assault and everything in between.

You’ll also enjoy base liberty and spend time with family who have traveled to see you graduate from Basic Training.

Don’t be surprised when your family sees something different about you.

You are a Marine that is disciplined, taking pride in service to your country, and ready to defend freedom when duty calls.

Now that you know what to expect in Marine Basic Training, you will come in with full knowledge of what will lie ahead in your future as you go from Trainee to a member of the United States Marine Corps.

Nothing is easy during your transformation from civilian to a Marine.

Long after you have been honorably discharged from the Corp, as the old saying goes, “Once a Marine, always a Marine”. 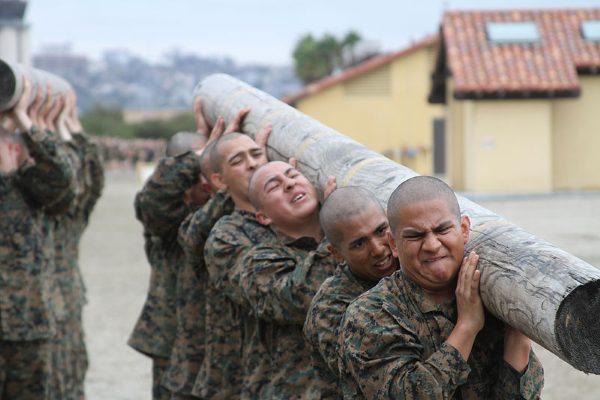 See the week-to-week Marine Corps basic training schedule for both Parris Island, SC, as well as San Diego, CA. We detail everything that happens in Marine Boot Camp from start to finish.