There are a total of nine active military bases in Missouri. Because the state borders the Mississippi River, it is able to support Navy and Coast Guard stations, meaning that all five branches of the US Military have at least one base in the state.

Overall Mission: Belton Army Reserve Center is one of the newest bases in the country, having opened in 2013.

It is primarily a training facility for the Army National Guard and other reserve units.

It is the current location for the U.S. Army Maneuver Support Center of Excellence, which trains the Military Police and US Army Chemical Corps, among others.

The Missouri National Guard has most recently participated in peace-keeping exercises and supported law enforcement during recent demonstrations.

Overall Mission: The Naval Base in St Louis operates as both a Navy Operational Support Center, which provides administrative support and housing for Navy Operations in the area.

It is also the official base for the Missouri Naval Reserves.

Apart from administrative staff, only a small number of US Marines are stationed on the base.

Overall Mission: The Jefferson Barracks have existed as a military installation in some form since 1826.

It was turned over to the Air Force in 1946, and later became an Air National Guard base.

It is currently a major site for Space Command Readiness.

Overall Mission: Rosencrans operates on a small portion of the Rosecrans Memorial Airport.

It is a training facility for airlift operations for the Air National guard, and other airborne elements of the US Military.

Overall Mission: Whiteman Air Force Base has at various times been both an airfield and a missile base.

It is currently the home of the B2 Spirit bomber wing.

Overall Mission: The Marine Corps Reserve Training base in Springfield is responsible for training both reserve and active duty Marine personnel.

It is host to several Marine Divisions, and is home to most of the Marine units stationed in Missouri.

Overall Mission: USCG Station in St Louis is the headquarters for Coast Guard operations along much of the Mississippi.

It has a total of five rapid response boats that operate up and down the river. 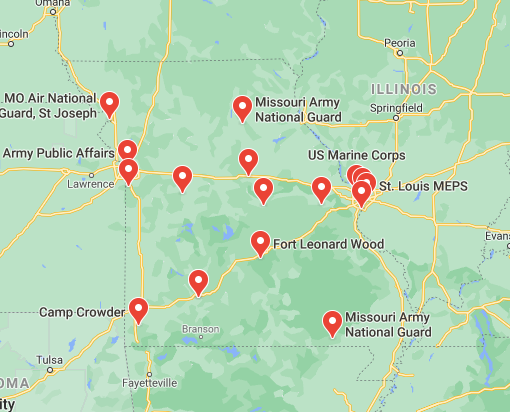 Missouri is home to 9 major US military bases. Learn more about each base, including when it was founded, its overall mission, and more.