Kentucky has just 5 military bases, 4 for the Army and 1 for the Air Force.

Though there aren’t many bases and the different branches are not yet represented in this state, the bases that do exist perform important tasks.

The bases in Kentucky host some of the most essential trainings, and they are home to equally important units, such as armor and air assault teams.

Below, you’ll find a brief rundown on each of the four military bases in Kentucky.

Follow the links to the official websites if you’d like to gain a deeper understanding of a specific base.

Overall Mission: Fort Knox is home to many important training and management facilities, including the US Army Armor school.

They are also in charge of all career management, including swearing in and out of service and the US Army Cadet Command,

Overall Mission: This base both trains air assault troops and is home to active duty air assault units.

They are well-known for their Sabalauski Air Assault School. The base also trains and readies units to support air missions from the ground.

Overall Mission: This base provides fighting units with the ammunition they need.

They aim to remain reliable, timely, and affordable while providing both munitions and chemical defense products.

Their main mission is storing and administering, but they are also in charge of repairs, general maintenance, and disposal when necessary.

They operate under the Joint Munitions Command.

They have fire ranges, bivouac sites, an engagement skills training center, an obstacle course, a grass runway, and a center for simulated training.

The base has barracks and a dining hall to ensure troops are comfortable during their stay.

Overall Mission: The Louisville ANG base is the only air force base in Kentucky.  It’s home to the 123rd Airlift wing, which flies the C-130 Hercules.

Their primary mission is to transport troops, supplies, and equipment to places all over the world.

They also are involved in other missions like intelligence, combat control, and are even involved in special operations activities. 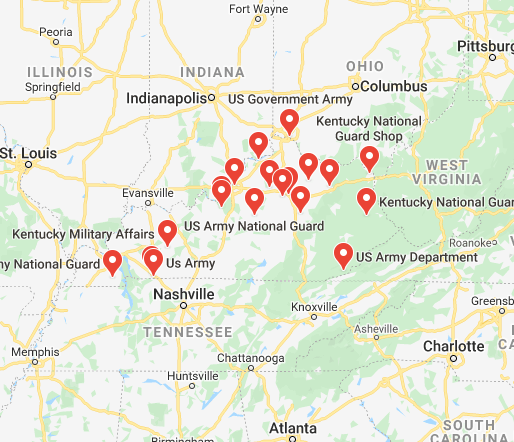 Kentucky is home to 5 military bases. Learn more about each base in KY, including when it was founded, its overall mission, and more.