There are a total of twelve active military bases in Maryland. They are primarily Army and Navy bases, but the Air Force has a presence in the state as well.

The Coast Guard and Marines do not have bases in the state.

Numerous scientists, engineers, and researchers are stationed at the base.

It is the oldest operational proving ground in the US, and played a major role in testing munitions for the US Army heading into WWI.

At over 114 square miles in size, it also happens to be the largest military base in Maryland.

The base conducts research and development of biomedical technology.

Until 2019, Fort Detrick was also a research site for germ warfare.

The US Department of Homeland Security also conducts security operations out of the base.

Overall Mission: Fort Meade has existed in various forms since 1917, first as Camp Annapolis Junction, then Fort Wood, and was renamed as Fort Meade in 1930.

It is the base for several security and defense operations including the NSA.

It is also a storage facility for the Library of Congress.

It performs testing and evaluations of Naval air systems.

It is also home to a test and training pilot school.

Overall Mission: NSA Annapolis has been a major facility for the US Navy since 1911.

Their primary mission is responding to new threats and challenges that may be encountered on the battlefield.

Half of the personnel stationed at the base are scientists and engineers.

NSF Indian Head is also considered the smallest military base in Maryland.

Overall Mission: Naval Support Facility Thurmont is the official name for Camp David, which is the presidential country retreat.

The base is operated and staffed by the US Navy and Marine Corps.

NSF Thurmont does not currently perform any military operations.

It is the headquarters for the Joint Task Force National Capital Region/Medical center, which oversees most major military medical facilities in the US.

Overall Mission: The US Naval Academy, commonly known as Annapolis, trains commissioned officers for the US Navy and Marine Corps.

It is one of five academies that train officers for the various branches of the US Military, and the second oldest currently in operations.

Overall Mission: Joint Base Andrews, formerly Andrews Air Force Base, is Joint Army and Air Force Base currently under the control of the Air Force.

It plays a major role in emergency readiness, including keeping aircraft in rotation for emergency response, and evacuation of high level figures.

Overall Mission: Warfield ANG Base is an Air National Guard base within Martin State Airport in Baltimore.

It houses the 175th wing of the Air National Guard.

It’s primary role is to provide support during natural disasters and other emergencies. 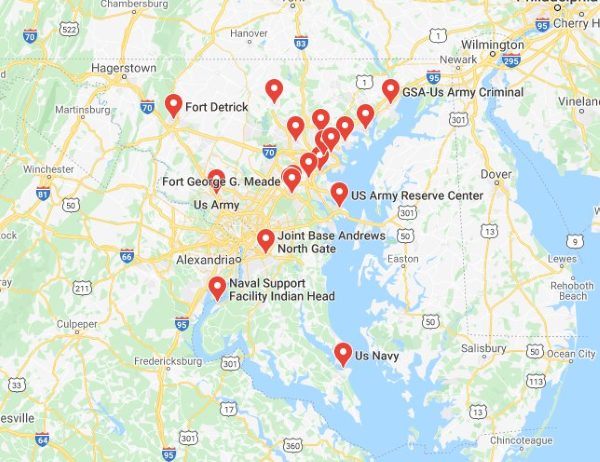 Maryland is home to 12 major US military bases. Learn more about each military base in Maryland, including bases for the Army, Navy, and Air Force.