Oregon is not home to many Active Duty military bases, but the state does have plenty of other military facilities within its boundaries.

The missions at each base vary greatly as well, with units working in support roles, combat roles, and everything in between.

Below, you’ll find a list of all military bases in Oregon, as well as links to their official sites in case you’d like to learn more:

All three of the Air Force bases located in the state of Oregon belong to the Air National Guard:

Overall Mission: This base focuses mainly on command and control. They assist air missions by supporting nearby ground control.

Alongside their support, the base commands its own air missions which include search and rescue, air-to-air combat, refueling, electronic warfare, and more.

Overall Mission: This base is home to two different units that serve separate missions.

The 173rd Fighter Wing performs those missions in flight to control enemy airspace.

Overall Mission: This base once again has two separate units that complete very different missions from one another.

They fly the F-15 aircraft and also work to respond to local and national disasters when necessary.

There is one army base in Oregon, specifically a Reserve and National Guard base.

Overall Mission: This military base is located within the Salem Municipal Airport.

It is the main takeoff and landing zone for the Oregon Reserve and National Guard aviation units.

Oregon is home to just one Navy base:

Overall Mission: This training facility is located in Oregon, but it is mainly used by a Washington Navy base, NAS Whidbey Island.

The space is used for training and testing related to aircraft and drones.

Even though there aren’t many bases for other military branches in Oregon, the Coast Guard happens to have several.

Overall Mission: This base focuses mainly on the supply needs of nearby Coast Guard units.

Related Article – How To Join The Coast Guard

Overall Mission: Aids to Navigation Team Kennewick does exactly what the name describes.

The base is responsible for the Columbia river from Dallas, Oregon to Richmond, Washington, the Snake river to Lewis, Idaho, and Lake Roosevelt near Spokane.

Overall Mission: This base is in charge of the Tongue Point area, the Columbia river from Cape Flattery to Cape Mears and from the east entrance to Hood River.

They also play a support role related to river buoys.

Its coverage extends to all of Oregon, parts of Washington, and parts of Idaho.

Overall Mission: This base runs search and rescue, marine law enforcement, recreational boating safety, and environmental protection for the Columbia River (Puget Island to Snake River) and the first 183 miles of the Williamette River.

It works in the area of Tillamook Head to Cape Kiwanda. 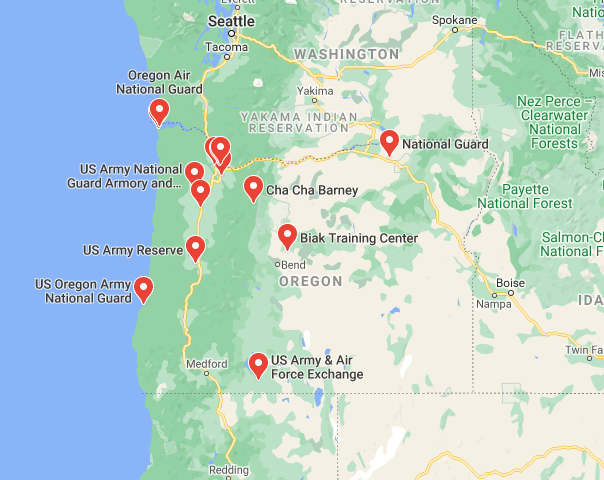 Oregon is home to 11 military bases. They include bases for the Army, Navy, Air Force, and Coast Guard, learn more about each.