Louisiana is home to a fairly large number of military bases. Their bases represent all five branches of the US military, as well as units in Active Duty, Reserve, and National Guard roles.

Louisiana military bases range in history, from being founded in the early 1900s to beginning in the early 2000s.

Each base also serves a unique purpose, from combat and military support to civilian training.

Each military base in Louisiana is outlined below.

If you’d like to learn more about any specific base, follow the link to its official site (provided below):

Overall Mission: Barksdale Air Force Base has a rich history that is filled with bombing, combat, reconnaissance, and navigation.

Today, the base is home to Bomb Wings, both Active Duty and Reserve/National Gaurd, and they have units serving on base and overseas.

Overall Mission: This base is all about combat communications. The units stationed here deploy, maintain, and operate communications related to both peacetime and wartime situations in locations all around the world.

Due to this work, they are considered a ground-support base.

Overall Mission: This is another base that focuses on ground-support missions, this time in the form of air traffic control.

England Air Park and its units operate and maintain air traffic and landing plans and systems to ensure that flying environments for deployed and non-deployed US Air Force units are both safe and efficient.

Overall Mission: This base is mainly used for training purposes to provide members of the US Army and other military branches with the skills and experience they need to excel in combat and battlefield operations.

The base has also built a solid support structure for deployed units and maintains a quality family life for its soldiers.

Overall Mission: For Army units, this base provides essential pre-mobilization and post-mobilization.

It also has the unique purpose of training Louisiana Army National Guard and Department of Defense customers in areas related to military support and emergency services.

Overall Mission: This base is home to a variety of National Guard trainings.

Overall Mission: This base has the sole essential purpose of providing training for the Noncommissioned Officers Academy.

It trains future NCOs for the 199th Regiment

Overall Mission: This is a unique base in the way it serves all branches of the US military, both Active Duty and Reserve units.

The base provides weaponry to all branches, works with flight planning, and provides firefighting support and electronic maintenance.

Overall Mission: This base’s main purpose is to serve as support for its tenant commands.

It focuses on administrative needs as well as serves as a training space for air, logistics, and general Marine knowledge and skills.

It has multiple small locations across the coastal area of Louisiana, but each spot runs under this same command. 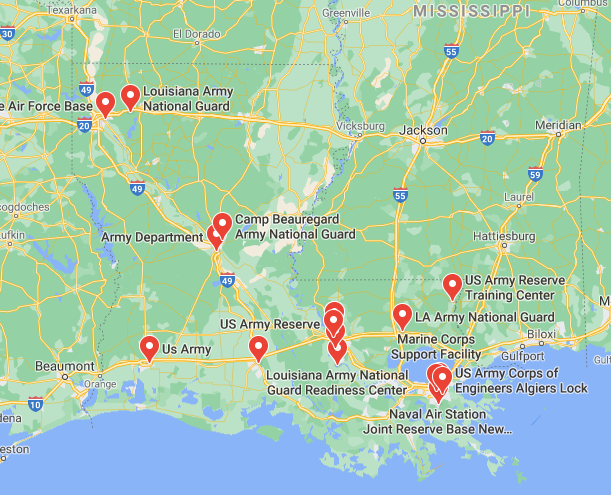 Louisiana is home to 10 major US military bases. Learn more about each base, including bases for the Army, Navy, Air Force, Marines, and Coast Guard.