The United States Air Force (USAF) deploys airmen to battlefields like other branches of the military.

Furthermore, some recruits join the military specifically with the intention of seeing action in a war zone.

Is this describes you, consider these 4 Air Force combat jobs when you consider a future in the U.S. Armed Forces:

The Air Force Tactical Air Control Party (TACP) receives highly advanced and specialized training in order to alter the course on the battlefield.

Air Force TACP specialists may work alongside U.S. Army and Marine Corps units on the front lines of conflict.

They have the responsibility of calling in airstrikes as well as locating the coordinates of targets.

Air Force TACP specialists have an extraordinary responsibility and their decisions can change the direction of the conflict for better or worse.

Along with receiving your high school diploma (or GED equivalent), you must complete the TACP Physical Ability and Stamina Test to qualify for the training program.

U.S. Air Force TACP Specialists are traditionally younger, however, enlistment is open until the age of 39.

Air Force service members also must score a minimum of 30 on the TACP selection model (through the Tailored Adaptive Personality Assessment System).

The USAF will look into your personal character and background to receive military security clearance.

Thus, if you are looking to serve the country in special warfare, the U.S. Air Force Tactical Air Control Party is a military career worth considering.

It is easily one of the 4 best combat jobs in the Air Force.

The United States Air Force (USAF) relies on the Combat Controller (CCT) division for some of its most difficult operations.

They serve as one-man units that may work alongside other special forces when necessary.

They have the ability to parachute from the air as well as scuba through the water.

Therefore, they may establish air control in the region they are conducting operations.

You need to complete the Armed Services Vocational Aptitude Battery (ASVAB) as well as receive a high school diploma to enlist with the USAF.

New recruits that would like to become Combat Controllers (CCT) must pass the Air Force Physical Ability and Stamina Test.

They also need to have a clean background and history (for security clearance), pass the Tailored Adaptive Personality Assessment System, as well as have normal color vision and depth perception.

Secondly, they must complete a Special Warfare Preparatory Course prior to receiving advanced training for scuba and parachuting.

You can learn more about one of the best Air Force combat jobs by requesting more information from a local recruiter.

Air Force Special Reconnaissance (SR) serves as another one of the best military jobs for combat in the branch.

For this reason, the United States Air Force trains and develops recruits for Special Reconnaissance.

The military branch depends on Special Reconnaissance teams to collect critical information about the enemy.

This may involve acquiring data on target locations or other information that is helpful on the battlefield.

Air Force Special Reconnaissance (SR) personnel work around the clock, often in extreme weather and times of the day to gather information.

They may collect information through a variety of means such as airborne or maritime operations.

Along with battlefield operations, specialists may also gather data through cyberspace.

You need a high school diploma or GED equivalent to join the United States Air Force.

There are other basic requirements for joining the USAF along with selecting a combat specialty.

SR personnel must be able to swim well underwater as well as complete multiple long-distance runs in a specified period of time.

Joining the Pararescue (PJ) team enables you to serve the country in one of the best combat jobs the military branch has to offer.

Therefore, they may see combat in their efforts to save and rescue injured personnel.

The Air Force often employs pararescue team members to hostile areas because they are trained as medics as well as combat specialists.

Because they may reach injured personnel in a variety of settings, Pararescue team members are extremely well trained.

They learn how to jump out of airplanes and parachute, as well as dive and swim to rescue fellow service members.

Consequently, Air Force Pararescue members can participate in every aspect of a combat mission.

Enlisting in the USAF and joining the Pararescue (PJ) team teaches you the critical skills of a medic, which can help you land a job after you retire from the military.

You do need a higher minimum score on the Tailored Adaptive Personality Assessment System to become a pararescue team member.

Air Force Pararescue Medics receive training for their job skills, but must not be afraid of swimming or parachuting.

They also must have normal color vision and depth perception.

The 4 best Air Force combat jobs provide the ideal balance for some airmen.

It allows them to serve the country and keep its citizens safe while also seeing action during duty.

Airmen that decide to perform a combat job have the added risk of injury or death, but can also become heroes in the process.

Nonetheless, the Air Force needs brave young men and women that are willing to put their lives in danger for the benefit of others. 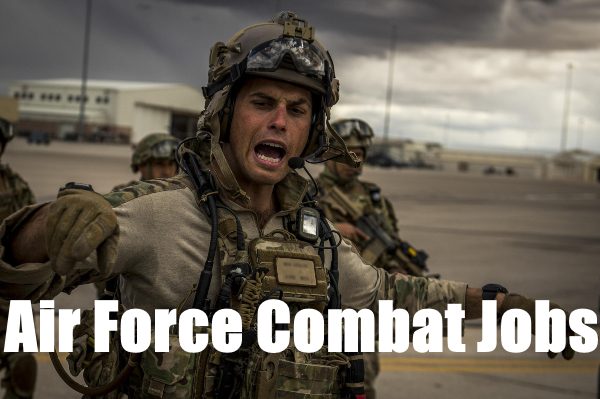 The Air Force has several combat jobs available to incoming Airmen. Find out what the best combat jobs are in the US Air Force, and how to get them.