There are 15 military bases in Pennsylvania.

The Marine Corps does train some of its reserve units on other bases in the state but does not have an active base in the state.

Some of the oldest and most prestigious bases in the country are here.

All military bases in Pennsylvania are vital in aspects of training the U.S. Armed Forces.

Overall Mission: The base is proud to hold the second oldest active military base in the Nation.

The U.S. Army War College and Training and Doctrine Command are based here.

The base is still a fundamental part of the training structure of the U.S. Army and its Commanders.

Overall Mission: The base started as an ordnance depot and a site for the Nation’s air defense system.

Like many other Amy depots, Letterkenny is considered one of the smallest military bases in Pennsylvania.

Overall Mission: The base was originally built because of its strategic location as a storage depot in 1918.

They also provide and do repairs on parts, electronics, medical supplies, clothing, and more.

They are the single largest distributor for the Department of Defense in the United States.

Overall Mission: They overhaul, repair, manufacture, and design electronic systems for the Department of Defense.

They operate for all branches of the Armed Forces of America and its allies.

It is also a testing site for new and old radar systems, giving the Department of Defense a testing facility on the eastern seaboard.

Overall Mission: The base and airfield were originally constructed as a place to test experimental aircraft.

The Department of Defense bought the property and turned it into an Anti-Submarine training facility.

The base was closed in 2011 since all the Armed Forces branches had moved out the area, for the last few years of it being open, it hosted National flying shows.

Overall Mission: This base is a major supply depot for the U.S. Navy with over 8 million feet of storage capacity.

They also hire thousands of civilian employees and contractors on a yearly basis.

The base also offers its support to other branches of the Armed Forces and their allies, however most of their as a supply depot is done domestically.

Overall Mission: One division of the U.S. Naval Sea Cadet Corp is located on this base, offering the training required for Sea Cadets.

It also offers services in the form of support for any Navy units that need it, specifically in the Philadelphia Navy Yard.

This base is a big part of the logistics chain on the U.S. Navy and it offers some of this support to other branches of the Armed Forces.

Overall Mission: The base is an active National Guard Training Center.

It is also headquartering for the Pennsylvania Department of Military and Veterans.

The base is the headquarters and main training facility of the Pennsylvania National Guard.

Overall Mission: The base was first used by the U.S. Army Signal Corps in the late 1800s.

The base later played a large support installation role for the U.S. Armed Forces, also providing emergency supplies for civilians.

Before closing for good, the base was used as a Air Force Graduate school and housing facility.

Overall Mission: The base provides air and technical support for all branches of the Armed Forces.

Providing training for pilots and proving storage facility for logistics.

Is also subdivision of the bigger base, Horsham Air Guard Station.

Overall Mission: This base was home to one of the groups that operate the Hercules aircraft for the Armed Forces.

This base now serves as the civilian market for the Capital City Airport.

Before the base was closed in 1969, it was the home of the Air Force Logistics Command.

Overall Mission: This a transfer and holding base for many of the state’s guard units.

They also provide logistic support to any branch of the Armed Forces that is in the area.

It is currently home to 9 full time and active units.

Overall Mission: This is the base where they train for the Civil Air Patrol, having done so since 1943.

This is a full time and active base, with 2 active units being headquartered there.

This base also participates in yearly civilian air shows based around its military heritage.

It’s considered one of the biggest military bases in Pennsylvania.

Overall Mission: Like most other Marine reserves units, the core mission for Echo company is to train units and individuals to conduct wartime operations.

Overall Mission: This is one unit in the states National Guard service.

This base does offer lifesaving capabilities to the surrounding area.

It holds the same high standards as the Coast Guard itself, even though it is a part time reserve unit.

It’s also considered one of the smallest military bases in Pennsylvania.

The station also offers supply and logistics support for the other members of the 9th district guard units.

It has its own on base housing and access to all the civilian market just outside the base walls. 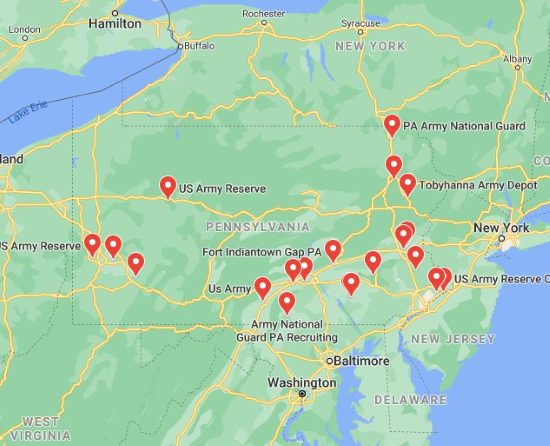 Pennsylvania is home to 15 major US military installations. Learn more about each military base in PA, including when it was founded and more.