Georgia has a total of fourteen military bases, with most of the bases being US Army bases.

However, all five branches of the US Military, including the Coast Guard have at least one base in Georgia.

See a list of bases for each branch in Georgia below.

Overall Mission: Dobbins Air Reserve Base is a reserve training base, with over 2500 USAF personnel stationed on the base.

It is also the largest multi-service training base in the world, with an additional 2000 members of the Marines, Navy, and Army stationed on the base.

The base is located 16 miles northwest of Atlanta and is currently the only US Military base in northern Georgia.

It also serves as an operating base for search and rescue missions and other humanitarian efforts.

Overall Mission: As the home of the Air Force Materiel Command’s Warner Robins Air Logistics Center, Robins AFB serves as the main hub for management and acquisition of a variety of aircraft, armaments, and support software.

The units stationed at the base also perform various testing and maintenance operations.

Apart from conducting special training missions, the base does not see much other activity.

Overall Mission: Fort Benning was established as the Home of the Infantry, and currently serves as the Maneuver Center of Excellence.

It houses or supports over 120,000 active-duty personnel.

It is considered a power projection platform, meaning it stands ready to deploy combat-ready troops by land and air.

Overall Mission: Fort Gordon is primarily a base for US Army communication and cyber-security operations.

It is also a training base for Army Signal and Cyber operations.

Overall Mission: Fort Stewart closed briefly at the end of WWII, but reopened at the beginning of the Korean War.

Fort Stewart functions as a staging area for infantry operations, and deploys troops through nearby subordinate Hunter Airfield.

Their core mission is training and readiness for global deployment.

Overall Mission: Hunter Army Airfield is subordinate to nearby Fort Stewart, and shares some of the same tenant units, but also has distinct units stationed, and is about 45 minutes east on the other side of Savannah.

Overall Mission: Kings Bay Naval Submarine base is 38 miles north of Jacksonville. FL and is located on the East River in Georgia, off the Cumberland Sound.

It is the home port for the Atlantics ballistic missile submarine fleets.

The base is also home to the Trident training and refitting programs.

Overall Mission: As a logistics support center, most of the population of the base is civilian contractors and technicians.

Their main mission is repair and reconstruction of ground combat equipment.

They also support military installations along the east coast.

Their primary mission is carrying out search and rescue missions.

They are responsible for 75 coastal miles from St. Helena Sound to Sapelo Sound. 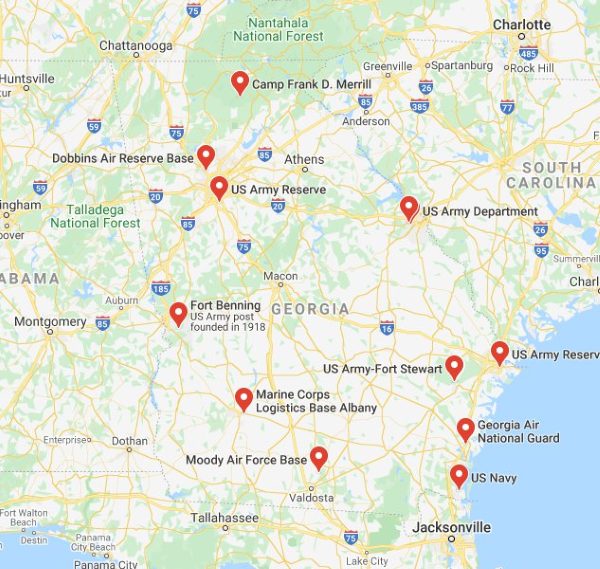 Georgia is home to 12 major US military bases. These include bases for the Army, Navy, Air Force, Marines, and Coast Guard. Learn more about each GA military base here.