Just like it’s sister state to the North, South Carolina is the home to many essential and large-scale Military Facilities.

Just like North Carolina, there is still not much Naval presence for the state as most of the Military operations in South Carolina are focused on air power and training.

As you will see, the Marines and Air Force play a large part in the local lifestyle in many areas of South Carolina.

Let’s take a look at all of the active Military Bases in South Carolina.

Overall Mission: If you or anyone you know has taken basic training through the Army, then Fort Jackson likely feels like your second home.

This base is the largest and most active initial entry point for US Army troops and hopes to take civilians and transform them into future Army soldiers through basic training operations.

This base may not have the latest facilities and most diverse range of specialties, but it ensures that more than 50% of a year’s new Army recruits get the training they need to be combat ready when they leave.

Commissioned in early November of 1941, NSA Charleston is a weapons facility that stores, supplies, and handles weapons and ordnance for all branches of the military.

Additionally, the base is now a training center for several large commands, including the Naval Nuclear Power Training Command, the Navy Munitions Command, and Explosive Ordnance Disposal (EOD) detachments.

When a new order went into effect in 2005 to create 12 new large-scale bases across the country, Joint Base Charleston was one of the bases that began to take shape.

Operated by the air Force, JBC is also unique as it is often used by civilians for domestic and even international flights to help support the local economy.

This base has consumed the Naval Weapons Station Charleston and several other bases to consolidate over 60 independent DoD entities under one cohesive base of operations.

JBC has the mission to support just about every branch of the Military with the necessary space and facilities to help provide air power and transport at any given time.

Being one of the largest military installations in the country, Shaw AFB plays a substantial role in the nation’s readiness and ability to take on any combat needs to defend and protect the country.

Shaw is home to the Air Force’s largest combat wing of F-16 fighter jets who are there to provide a combat-ready force that can be deployed anywhere they are needed for total air superiority.

For the Marines, having a strong sense of air cover when taking on dangerous operation allows operators to perform in even the most stressful situations.

At MCAS Beaufort, they provide the firepower and air superiority that Marines need with their seven squadrons of F/A-18 fighters being ready for anything when the Marines need them.

Beaufort is the Atlantic fixed-wing home for the Marine assets and is arguably one of the most important military installations in the country.

Parris Island knows their mission as their motto “We Make Marines” rings true with every aspect of the facility as it is where the nation’s finest marines are brought to life.

Parris Island is one of the most important Marine installations in the country as it is known for instilling the core Marine values into new recruits who are then sent to help defend and protect the nation.

It’s long list of accomplishments and sizable community makes Parris Island the place to be if you are looking to become the best Marine possible.

As a bonus, Parris Island is also home to the highly praised and impressive Marine Corps Band.

In Use: Present Day

Like most other Coast Guard stations in the US, USCG Station Charleston is responsible for securing our nations coastlines.

This particular station is part of District 7, which encompasses a 1.7 million square mile area from as far south as Puerto Rico, to as far north as South Carolina.

They’re also responsible for ensuring boats / ships are following Coast Guard regulations, and do so by conducting random searches.

In addition, they are also the first to go out to rescue a ship in distress, doing so no matter the weather or sea conditions. 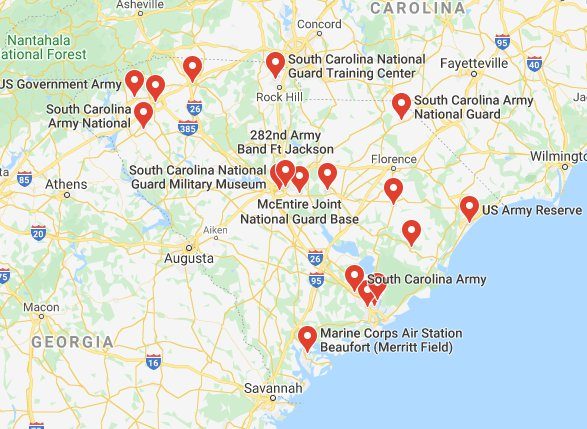 South Carolina is home to 7 military bases. Learn more about each base, including its location, when it was founded, its primary mission, and more.