There are a total of 6 military bases located in Utah.

The United States Navy does not hold an active base in the state, however, they do use the other bases as training and staging points.

Some of the oldest bases in the country started here, with some still in operation.

The bases here are important for the logistics and movements of the U.S. Armed Forces.

The Marine Corp unit that is staged here only house here during times that they aren’t active. They are part of a bigger unit based in California.

Overall Mission: The main purpose of the base is the manufacturing and testing of chemical and biological weapons.

The Department of Defense also uses this base as training and development point for experimental aircraft.

The Armed Forces uses this base as a training point for its Special Forces units for desert combat.

Since it is used for training, there are no units stationed here full time.

Overall Mission: The base was originally used as a storage facility for Ordnance being used in the W.W.2.

Although the base does have a full time Army commander, it is mostly filled by civilian contractors.

The base now provides all forms of support for the Armed Forces from demilitarization, to fabrication to logistic support and more.

Since it is operated by civilians, there are no active units stationed here.

Overall Mission: The Utah National Guard has Air and Army units to be used as supplemental forces during wartime.

There are 6 units that are based here, with other branches using the base for training exercises at varying times.

The Department of Defense uses this base as training facility for Artillery, Intelligence, Special Forces, Air Assaults and more.

Overall Mission: The base is used for a variety of training, including live fire training for pilots, this being one of the only bases that this allowed.

The Armed Forces also trains on and tests some of its missile systems and anti-aircraft weapons on this base.

Overall Mission: The base was originally designed to be the headquarters for a combat fighter-bomber unit.

It is now the headquarters for a Refueling Wing Squadron to provide in-air refueling capabilities to the U.S. Armed forces and allies.

The based has housed every type of refueling aircraft that the U.S. Military has used and is currently using the world’s most sophisticated system available.

This particular unit is stationed in Utah, with others being in California and Nevada.

They are used to supplement the Active duty forces should the need arise.

The base is also important in the logistical movements of the D.O.D. 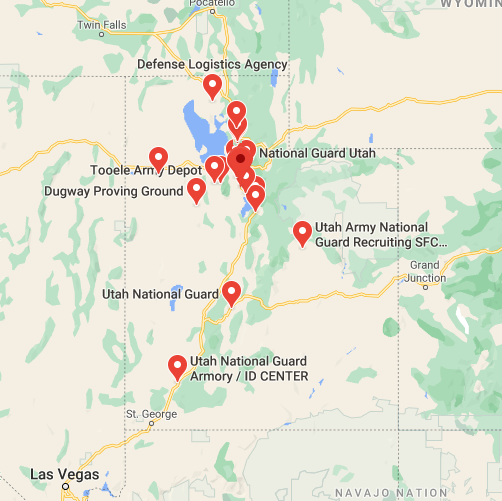 Utah has a total of 6 military bases, including bases for the Air Force, Army, and Marine Corps. Not surprisingly, they do not have bases for the Navy or Coast Guard.