Texas is a state that has a rich military history and is seen as the heartland for many Military branches.

With most of it’s bases being formed and established during the second world war, every military base in Texas has a unique story to tell with both it’s history and way of getting things done.

Texas is a state where many recruits are trained, many planes take off, and many vehicles are repaired.

With such a diverse range of military history and modern units still working here, let’s look at the homes many branches have within the state of Texas.

Overall Mission: Located 6 miles southeast of downtown Corpus Christi, Naval Air Station (NAS) Corpus Christi is where Navy pilots go to earn their wings. Founded in 1941, the base is home to Training Air Wing FOUR, and student naval aviators fly the T-6B Texan II as part of their curriculum.

The MQ-9 Reaper drone is also operated out of NAS Corpus Christi, flown by the US Customs and Border Protection.

Overall Mission: Founded in 1942 and the first joint reserve base in the country, NAS Joint Reserve Base Fort Worth trains and equips aviation units and ground support units for international mobilization.

The base stands to enable war fighter readiness and to support the overall personnel and families’ needs while they are located on the base.

Overall Mission: The mission at NAS Kingsville is to foster an environment where every person on the base is being supported to reach the same common goal.

In particular, the base is designed to help and foster support for the training air wings that help produce future generations of strike fighter pilots.

In many ways CCAD is seen as the helicopter maintenance hub for nearly all aspects of the government and military branches as they have the facilities and technology to maintain most active helicopters.

The base also acts as a training facility where a wide array of military groups have the ability to train and have access to the space and resources they need.

Overall Mission:  With its remote area and massive amount of land, Fort Bliss is used primarily as a training ground in addition to housing some base camps.

This base is the largest base used for training air defense artillery soldiers and has a very diverse array of units stationed there at any given time.

Numerous duties are fulfilled at this location from helping develop future leadership strategies to ensure proper integration is achieved across the entire Army.

Fort Hood is known far and wide as being one of the largest and most diverse military bases in Texas, as well as the world.

Sitting on 335 square miles of Texas real estate, It houses a wide array of units and military divisions.

With it’s massive territory, Hood is able to accommodate two armored divisions and allows for testing of various degrees of military operations and training plans.

If it involves the Army in any way, there is probably a unit at Fort Hood for the job.

As an army depot, Red River specializes in the repair and maintenance of ground combat vehicles so they can be brought back to working order for future use.

This base has the facilities and technicians to repair just about anything with wheels, tracks, and an engine as they service everything from IFV’s to MLRS vehicles.

This depot can take on whatever is thrown at it and turns it into a profit in no time.

Overall Mission: Being one of the newest installations in the Military as a whole, the Army Futures Command is designed at modernizing and adapting the Army to thrive in the modern world

Through various data collection and analytics work, the soldiers here can help better prepare the Army for future scenarios with new capabilities and organizational structures.

Overall Mission: When it comes to aircraft that can drop a payload and strike fear to anything on the ground, it probably lives at Dyess.

This base is home to the 7th Bomb Wing that operates B-1B Lancers with additional units being responsible for the fleet of C-130J aircraft.

This base also heavily emphasizes it’s green energy and sustainability initiatives that have been highly recognized.

Overall Mission: Despite being referred to as an airbase, you will find no runways or hangars at Goodfellow as it is used for training purposes.

This is where some of the first training wings learned the basics and has helped train intelligence and surveillance units as well.

There is also a mission to train firefighting personal for the general use by the DOD.

Overall Mission: Since 1942 Laughlin has been responsible for training some of the finest military pilots that have ever seen service for this country.

The training at this base helps American and Allied pilots learn how to become the best and sets up every graduating pilot for a successful career.

Another one of the largest military bases in Texas is Sheppard AFB.

When it comes to size and number of students trained, no other installation on the planet can honestly hold a torch to Sheppard.

This base is famous for its technical training that allows students form nearly every branch and from any allied nation to come and perfect their craft of technical work.

You can find students here learning to fly the planes right next to those learning how to fix them.

Overall Mission: Whereas most other bases were set up with a clear purpose in mind, Ellington is unique in that it is a joint shared installation used by many tenants.

From the national guard to the Marine Corps, this base has the facilities to assist in various tasks that involve Air Sovereignty missions and range all the way to disaster relief services.

In some cases, NASA even may use this base as the Johnson Space Center is located close to this base.

The base is also home to newer drone operations and has a history of strategic drone usage with over 120,00 logged flight hours.

While this base is part of a somewhat recent initiative to create 12 joint bases in the country, Joint Basse San Antonio is comprised of several military bases throughout Texas.

Included in the JBSA sphere are Fort Sam Houston, Camps Bullis and Stanley, Martindale Army Airfield, and Randolph and Lackland AFB’s making up the Joint base.

Because of it’s multi area and base composition, this is the largest DoD entity in the country and enables strategic missions to take place in any corner of the globe.

The over 250,00 personnel that fall under the JBSA range from those working on the multiple active runways to those working in the hospital network that all work together towards a common goal. 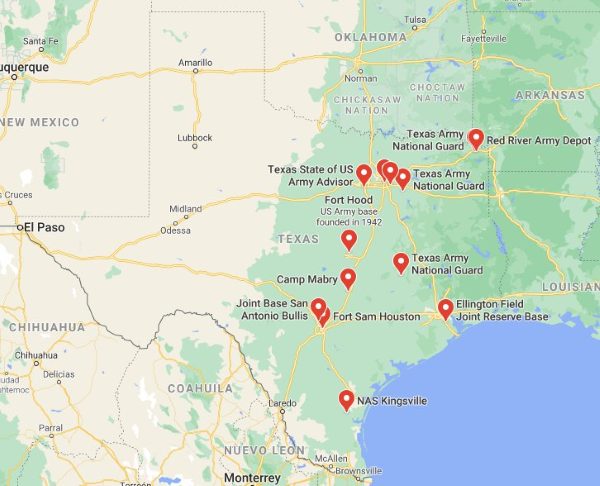 Texas is home to a wide variety of military bases, including installations for the Army, Navy, and Air Force. See our list of all 14 major military bases in TX.