The existence of the military color guard dates to the beginning of our country.

Military units need to stay in formation during a battle, so soldiers relied on the banners and flags to find their regiment.

The flags usually have symbols representing successes and other achievements, thus leading to the traditional aspect of the color guard.

While the military no longer needs flags and banners to find their regiments during a battle, the color guards remain a formal and time-honored tradition.

In the United States, every branch of the service, the Reserve Officer Training Corps (ROTC), and the Junior ROTC (JROTC) have a military color guard.

Currently, the modern color and honor guard performs at funeral services and in ceremonial and state events.

Also, the color and honor guards are the ambassadors to the military and present a polished and positive image of what they represent.

Related Article – Platoon Size: How the Army is Organized

The unit responsible for the military honor guard for the Army is The Old Guard, which is the 3rd U.S Infantry.

The Old Guard dates to 1784, and it continues to work to escort the president and handle some security in Washington DC.

Also, the Old Guard is the official ceremonial unit for the Army.

The Old Guard has several platoons.

Each platoon in the Old Guard has its responsibilities, honors, and traditions. However, they frequently work together during ceremonies.

If you wish to join The Old Guard, you must meet some requirements.

For instance, males must be between 5 feet 10 inches and 6 feet 4 inches.

Also, the height range for females is 5 feet 8 inches to 6 feet 2 inches.

Furthermore, the weight restrictions are the same as other soldiers in the Army.

A candidate must not have any restrictions in place and must on regular active duty and a citizen of the United States.

Also, a Ranger Qualification is desirable in applicants.

If you meet the requirements mentioned above, you can submit your packet to the unit.

The packet includes your request for assignment to The Old Guard, a signature from your chain of command, a statement expressing your understanding that this is a two-year assignment, and several other necessary items.

Related Article – How To Become An Army Ranger

The Navy Ceremonial Guard was established in 1931 to represent the navy during public, Navy, Presidential, and Joint Armed Services ceremonies.

The Guard has 200 enlisted members that are handpicked based on high standards.

Also, they receive marching and drill training and stay in great physical shape.

After the training, the graduates join a platoon to specialize in the Navy Ceremonial Guard.

The process for being a member of the Naval Ceremonial Guard is a long one, and potential members should begin the process of applying up to 15 months in advance of the next guard rotation.

Requirements include males having a height of at least six feet and females at least 5 foot 10 inches.

Also, while contact lenses are fine, glasses are not.

Furthermore, the expectations are having a good military bearing and physical features that show no tattoos, scarring, or acne.

After reviewing past evaluations, an interview and a nomination are necessary to continue with the process.

There are different flights within the Air Force Honor Guard.

The Colors Flight will have four people, with two being rifle guards and the others protect the colors.

Also, the Body Bearers Flight works with state funerals and carrying the remains of service members and their dependents.

Next, the Firing Party flight performs the firing of the three volleys during funerals.

There is a Training Flight dedicated to training, supporting, and standardizing all Air Force Honor Guards.

Finally, the Drill Team flight shows drills and performs publicly. Also, the Honor Guard Drill Team is well-known throughout the world for its performances.

If you are a brand-new recruit and wish for consideration for the Air Force Honor Guard, talk to your recruiter about applying.

However, if you are already in the Air Force, you can apply if you fulfilled your time-on-station requirement and talk to your commanding officer.

The Air Force Honor Guard looks for candidates with an excellent moral character without posture or other physical issues.

Also, perfect eyesight is ideal, but you can wear contact lenses.

Furthermore, you must not have a fear of firearms or have anxiety issues.

The ability to speak clearly and lift 40 pounds is necessary.

If you are a male, your height should be at least 5 feet 10 inches.

However, if you are a woman, your height should be at least 5 feet and 6 inches tall.

There are three different platoons in the Marine Corps Color Guard.

First, there is the Battle Color of the Marine Corps.

This platoon is the only group within the Marine Corps Color Guard to carry the Marine’s Battle Colors.

The Battle Colors include 54 different streamers representing all Marine Corps missions and campaigns.

Next, the Marine Corps Color Guard Platoon does military honors ceremonies all over the United States. Also, this platoon further divides into the Commandant’s Four and three infantry squads.

The Commandant’s Four is the official Color Guard, while the Infantry Marines are keepers of the colors.

Finally, the Color Sergeant of the Marine Corps, established in 1965, carries the National Flag during ceremonies.

The United States Marine Corps Drum and Bugle Corps is “The Commandants Own” and is made up of several Marines from marching bands within the Marines.

Also, the United States Marine Corps Silent Drill Platoon is a 24 person rifle platoon, and it is part of the Honor Guard.

Furthermore, the Color Sergeant of the Marine Corps is an appointed position.

The Coast Guard Ceremonial Honor Guard is a unit that performs funerals and other ceremonies in Washington DC and all over the world.

1962 marked the establishment of the Coast Guard Ceremonial Honor Guard.

There are 80 members in the Honor Guard, and they perform around 20 ceremonies each week.

Like the other military branches, considerable training goes into being a Coast Guard Ceremonial Honor Guard member.

Before training begins, there are some requirements.

Members must have a security clearance, as well.

You can express your desire to be a member of the Honor Guard during training.

The training is rigorous and takes about four weeks to complete.

Before modern warfare, battles happened with soldiers trying to stay in formation and find their units.

Therefore, the color guard carried flats so soldiers could find their place and know where to go.

These days, the military color guard’s existence is traditional and largely ceremonial.

Every branch of the military has its color/honor guard to perform specific duties.

In all cases, joining the honor guard means being of good character and being of the right height.

Also, some branches recruit and hand-select their members while other branches have active-duty members apply for a two-year rotation. 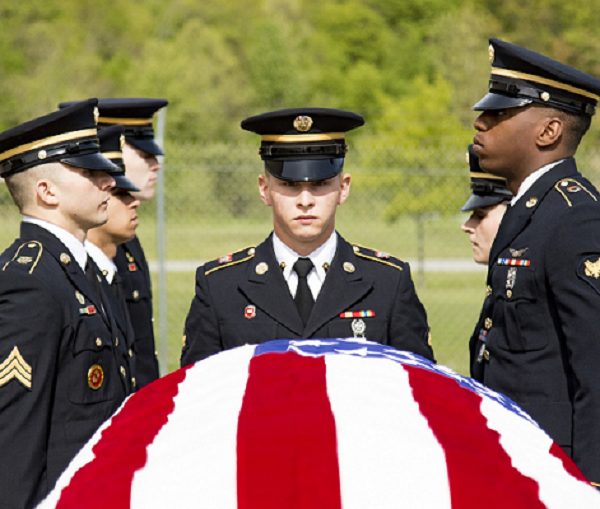 There are Color Guards in all 5 branches of the US Military, as well as the Reserve Officer Training Corps (ROTC), and the Junior ROTC (JROTC). Learn more about each branches Color Guard here.