The Marine School of Infantry (or SOI) is an important step in the early progression of a new recruit.

After completing boot camp, Marines get assigned to the second stage of USMC military training.

The Marine Corps has two locations for School of Infantry (SOI) training.

Learn more about SOI and what you can expect in terms of training while at Camp Geiger or Camp Pendleton.

What is the School of Infantry (SOI)?

Marine School of Infantry (SOI) represents the second stage of initial training for the USMC.

Recruits begin their journey in the Marine Corps at Recruit Training.

Recruit Training lasts 13 weeks in the Marine Corps, which is by far the longest boot camp of any military branch.

Boot camp for Marines is also considered the most demanding and physically exhausting.

Recruit Training consists of four phases and is held at one of two locations: A) Parris Island (South Carolina) or B) MCRD San Diego (California).

After successfully completing boot camp, recruits progress to the School of Infantry (SOI).

School of Infantry (SOI) training gets divided into two locations.

The primary exception is female recruits, who attend SOI East regardless of where they originate in the United States.

The U.S. Marine Corps maintains its longstanding tradition that every solider (regardless of Military Occupational Specialty) is “first and foremost, a Rifleman.”

However, the School of Infantry in the Marine Corps separates recruits based on their desired military occupation.

On the other hand, all non-infantry Marines receive SOI training through the Marine Combat Training Battalion (MCT Bn).

Marine School of Infantry training is an important transition from an entry-level introduction at boot camp to preparing Marines to become “combat-ready.”

Recruits are generally separated by their proximity in the United States, but the SOI East location also handles all the female recruits as well.

SOI East is at Camp Geiger, a satellite facility of Camp Lejeune in North Carolina.

The camp is about 50 miles from Wilmington and 250 miles east of Charlotte.

According to the official website, the objective of SOI East:

The course trains new recruits in the knowledge and skills required to perform as a Rifleman, Mortarman, Machine Gunner, Infantry Assault Marine, or Antitank Missile Gunner.

The training is a combination of classroom learning and field training, including offensive and defensive operations tactics.

The Marines will receive instruction on employing their assigned weapon system(s) both in a classroom environment and during the seven weeks of field training.

Recruits get pushed to the limits through live-fire simulated activities as well as a 20-kilometer hike that concludes the training.

Here is a good introduction video as to what you can expect while you are at Camp Geiger.

Marine School of Infantry has a second training grounds at Camp San Onofre.

San Onofre is part of Camp Pendleton in California.

It receives new recruits from the Marine Corps Recruiting Depot in nearby San Diego, California.

Once again training is accomplished through a balance of classroom instruction, field training, and live-fire experience.

Though the training and standards are identical between the two SOI locations, the order of events can differ from SOI East.

SOI West molds young Rifleman by introducing them to a foundational understanding of their military role.

According to the official website, SOI West trains recruits:

To possess a foundational understanding of, and their role in applying, the Marine Corps’ warfighting ethos, core values, basic tenets of maneuver warfare, leadership responsibilities, mental, moral, and physical resiliency in order to contribute to the successful accomplishment of their unit’s mission.

Marine School of Infantry serves an important purpose of preparing the next line of soldiers.

Whether entering the Marines in a combat or non-combat MOS, new recruits will get a taste of offensive tactics through numerous day and night live-fire events.

Like SOI East, once recruits complete the training course they graduate and receive their first permanent assignment based on the chosen Military Occupational Specialty (MOS).

How long is SOI?

Recruits that seek to become a member of the infantry company endure 59 days of training through the Infantry Training Battalion.

The purpose of the Infantry Training Battalion (ITB) is to develop new recruits into infantrymen “who can fight, survive, and win in a combat situation.”

Meanwhile, non-combat Marine MOS recruits only spend 29 days at the School of Infantry.

Their training is assigned through Marine Combat Training (MCT) where only the common skills needed in combat are taught.

The Marine Corps also has an Advanced Infantry Training Battalion (AITB) which provides additional combat training for infantry Marines other than Rifleman (MOS 0311).

Where do Marines go after SOI?

There are two to three stops on your path to becoming an official Marine.

The first is to complete Recruit Training, or boot camp, which lasts 13 weeks.

The second is the Marine School of Infantry, which lasts between one to two months.

After you graduate from the School of Infantry it is time to get recognized as an official Marine.

Recruits that graduate from SOI East or SOI West receives their first permanent assignment based on their Military Occupational Specialty.

The School of Infantry does hold an SOI graduation ceremony for friends and family.

You will have a short amount of time to visit with new Marines before they depart for their first assignment.

Marines may or may not receive leave once they reach their new unit.

Here are some of the most frequently asked questions about the Marine School of Infantry:

Where do women go for the Marine Corps School of Infantry?

Is SOI harder than boot camp?

Both types of Marine Corps training are difficult.

Recruit training is considered the most challenging and demanding boot camp of all the military branches.

Meanwhile, the School of Infantry training is also very demanding and intense.

You sharpen your skills as a Rifleman, even if you don’t plan on serving a combat Military Occupational Speciality.

Therefore, SOI training comes more naturally for some recruits compared to others.

Some Marines insist that SOI is more physically demanding than boot camp but that’s up to speculation.

Why do Marines with a non-combat MOS attend School of Infantry?

Marine Corps’ motto is to make every Marine “first and foremost, a Rifleman.” So, even those in support MOS receive training through the Marine Combat Training Battalion. In this case, SOI is only 29 days of training in the basics.

Can Marines have their phones at SOI?

Marines spend the majority of their time at SOI in the field and without direct access to cell phones.

Therefore, phones are not forbidden yet the use of them is rare.

It is not uncommon for most recruits in SOI training to go for weeks before they have time or the ability to make a call back home.

Consequently, you should notify friends and family beforehand that you will not be in contact frequently because of the training schedule.

Is there a graduation ceremony for Marine Corps School of Infantry?

There is a ceremony that friends and family are welcome to attend. However, leave after SOI is impossible to get, and you won’t have much time to visit before leaving for your first duty station.

Can you leave base during SOI?

School of Infantry training is demanding which requires you to remain at the base.

There is generally no evening liberty during the week, however, it is possible to get weekends off.

Leave is generally not available to new recruits until they complete SOI and transition to their first permanent assignment.

There you can submit a request for leave for ideally at least a weekend.

But don’t expect any leave between SOI graduation and your first permanent assignment.

You can spend a few minutes with friends and family right after graduation before departing for your first assignment.

Do Marines get leave after SOI?

It depends on the assignment and your company.

Some divisions will grant leave after you arrive at the first permanent assignment.

But usually, you have to put in a request and hope for the best.

Nothing is guaranteed, but ideally, you can at least borrow future leave time for the opportunity to at least visit friends and family for a weekend.

Marine School of Infantry is an exciting step to becoming recognized as an official soldier in the USMC.

The School of Infantry trains recruits on being a Rifleman and combat skills, regardless of your Military Occupational Specialty (MOS).

Non-combat and combat Marine MOS receive some form of School of Infantry training.

Levi D.
Levi served in the Marine Corps as a heavy equipment operator from 2007-2011. He deployed to Iraq in 2008 where he convoyed heavily around the Anbar province with a myriad of units. Following the Iraq deployment, Levi was assigned to various detachments who travelled and worked around Southeast Asia. He is now a freelance writer and outdoor enthusiast who spends much of his year traveling between campsites around the country.
Latest posts by Levi D. (see all) 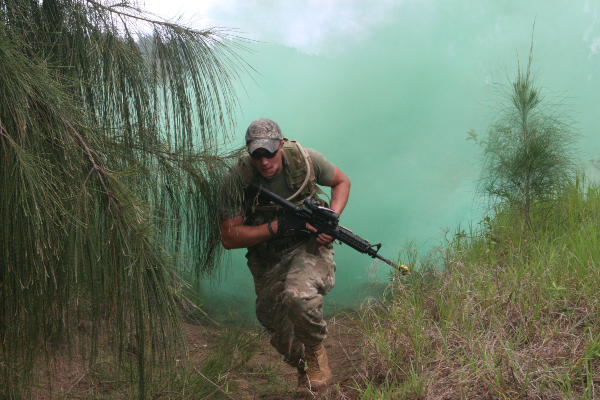 Learn more about Marine School of Infantry, or SOI, including details on what it is, where it's conducted, its duration, what happens after SOI, and more.

One Reply to “Marine School of Infantry”