The threat of a chemical attack remains legitimate decades after the method of aggression was developed.

For this reason, MOPP levels are created to keep service members, as well as the nation, safe.

Chemical attacks were deployed during Word War I and remain a threat to national security.

Learn more about the MOPP levels in our full explanation of the gear.

In general, recruits are introduced to MOPP gear early in basic training to prepare for such an attack.

Thus, MOPP levels are introduced to provide the proper gear in the event of a nuclear, chemical, or biological attack.

Modern warfare calls for the need to remain well protected against biological or chemical assaults.

These protective measures are instituted to keep soldiers safe from nuclear, chemical, and bacteriological agents.

Once you receive your MOPP gear during basic training, it’s important to change the air filters on the gas mask periodically.

Moreover, military personnel should always decontaminate MOPP equipment after use.

In the past, MOPP over-garments were manufactured with layers of activated charcoal.

The charcoal is designed to provide a protective layer under the garment.

However, current MOPP gear has been replaced charcoal with lightweight carbon beads.

MOPP levels are designed to indicate the level of threat regarding a nuclear, biological, or chemical attack (NBC).

The levels were created post 9/11 to provide safety and security during an unconventional assault.

As a result, MOPP levels traditionally correspond to a direct threat of an NBC attack.

Furthermore, MOPP levels may allude to the number of troops required to keep an area safe from an NBC threat.

The MOPP levels are determined based on current chemical or biological threats.

For this reason, MOPP levels may elevate in a very short period of time.

Thus, military personnel should always maintain MOPP equipment and remain prepared to use it in the event of an NPC attack.

MOPP Ready is utilized to indicate military personnel should remain prepared in the event of an NPC assault.

Therefore, active-duty troops are expected to carry a protective mask.

Moreover, MOPP gear should keep a set of protective gloves, suit, and boots nearby.

It’s required in the event the MOPP levels rapidly increase from “Ready” to level 0-4.

Military personnel are expected to have MOPP gear ready within 2 hours.

Furthermore, a second set of MOPP equipment is necessary within a 6 hour range.

MOPP Zero represents “no threat at all” to a nuclear, biological, or chemical (NBC) attack.

As a result, it’s the basic awareness level for the potential of an NBC assault.

In general, troops are anticipated to have MOPP gear within reach.

Thus, MOPP equipment may be necessary to wear within a moment’s notice.

While the threat of a chemical attack remains unlikely it’s crucial to keep MOPP gear nearby.

These items include the protective gas mask, suit, gloves, and boots.

Additionally, military personnel are expected to remove contact lenses and other items that are not compatible with MOPP gear.

MOPP 1 is a status that requires swift action to remain safe against a nuclear, biological, or chemical threat.

Consequently, MOPP 1 requires the use of a protective over-garment.

Furthermore, military personnel are expected to carry the rest of the ensemble in the event of a disaster.

MOPP 1 indicates an attack may happen or where contamination has already occurred.

Nevertheless, MOPP 1 does not suggest a direct, imminent threat to military personnel.

Thus, the MOPP level requires military personnel to don a “yellow alert” situation over the garment and boots.

Soldiers are expected to don the protective suit and boots in preparation for an attack.

Moreover, the other MOPP gear (gas mask, gloves) may be required without notice or a warning.

It’s important to note that MOPP 2 does not indicate that an NBC attack is imminent.

Rather, MOPP 2 notifies military personnel to have protective gear ready within a minute’s notice.

MOPP 3 is utilized in situations where there is a potential hazard from vapor or contact contamination.

Additionally, MOPP 3 can reflect other issues that pertain to safety and health of military personnel.

MOPP 3 requires that soldiers wear all protective equipment aside from the gloves.

Notwithstanding, safety gloves are expected to be carried.

The MOPP level suggests that a nuclear, biological, or chemical threat is high.

MOPP 4 (of all the MOPP levels) is the only to require a full covering of protective gear.

MOPP 4 is enacted to keep a military base or personnel safe from harm or danger.

It’s anticipated that anyone wearing MOPP gear pass through a decontamination line.

The decontamination line is designed to get troops and gear to a safe spot while providing non-contaminated attire.

MOPP 4 represents a serious threat to the security and welfare of military personnel in the area.

In general, MOPP 4 is reserved for situations that involve an active or imminent NBC attack.

Basic training is your only opportunity to ask questions about the gear as well as make sure you are properly fitted.

There are horror stories of recruits being tested for MOPP equipment with tear gas only to reap the effects of the nasty gas.

As a result, military personnel are expected to have MOPP gear on hand in the event the level is elevated.

Furthermore, personnel should make sure that they know how to properly use the equipment in the event of a disaster.

During basic training, recruits are introduced to the following MOPP gear:

Moreover, the gas mask is designed to eradicate dangerous particles in the air.

Thus, the protective mask provides clean breathing even in an unhealthy environment.

However, the gas mask is only effective when fitted properly to eliminate any chance of harmful agents entering the protective barrier.

Regardless, a protective mask will not filter out lethal gases such as carbon monoxide.

The mask carrier is provided to service members to prevent the gas mask from being damaged.

Military personnel traditionally use the mask carrier as part of their battle gear for easy access.

The mask carrier includes a few accessories like a technical manual and chemical detection papers.

Additionally, the carrier may carry an extra filter or spare parts for the protective mask.

Lastly, the mask carrier should include a nerve agent antidote kit (NAAK).

The over-garments for MOPP levels keep you safe from harmful biological or chemical agents.

In general, the protective suit is referred to as a Joint Service Lightweight Integrated Suit Technology (JSLIST).

The clothing is specifically designed to keep an individual safe from an NBC attack.

The protective suit is fitted to get worn over a traditional uniform.

As a result, the suit is designed to allow maximum airflow (for cooling purpose) while keeping chemical and biological agents free from the skin.

In the past, the U.S. Armed Forces utilized charcoal lining as a protective barrier.

Often, military personnel attach M9 Detector Paper on the suit to identify chemical agents they may come into contact with on the battlefield.

The M9 Detector allows military personnel to identify harmful agents they may come across in the field.

In general, soldiers attach M9 Detector Paper to an outfit.

Thus, military personnel have a variety of places they may plant the M9 Detector on the body.

Nevertheless, most opt to place the M9 Detector Paper on the dominant arm and leg.

Further detection works by planting M9 Detector Paper on the opposite wrist and shin area.

In general, military personnel are expected to have protective gloves in possession or nearby.

The safety gloves are usually designed of highly durable rubber.

For this reason, they serve combat operations the best.

The protective gloves keep your skin protected from harmful agents.

Overboots are the remaining piece of protective gear required for various MOPP levels.

The boots – like the gloves – are composed of a highly durable rubber.

Once again, combat roles find the most purpose with overboots.

The boots keep your feet and skin free from harmful biological or chemical agents.

The threat of nuclear, biological, or chemical (NBC) attacks remains plausible in the 21st century.

Depending on the MOPP level, military personnel are expected to utilize MOPP equipment or have it nearby.

You are expected to understand the various MOPP levels as well as respond with the appropriate attire.

Doing so can keep you safe and protected in the event of an NBC attack. 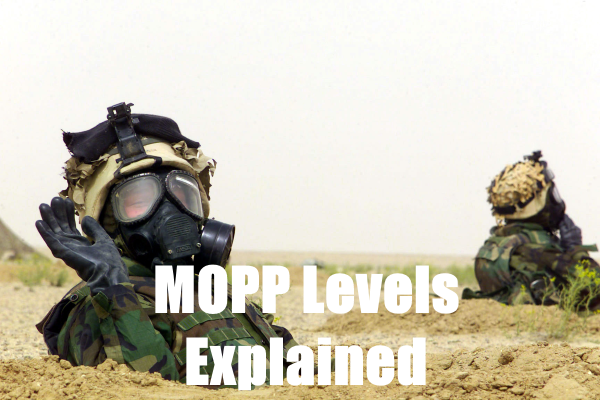 Learn more about the various MOPP levels employed by the US military to help prevent against chemical and biological attacks.