What is the Navy SEAL rank structure? Is it any different from the rest of the Navy?

Like any branch of the U.S. Military there is a command structure with plenty of different ranks.

Here is a detailed breakdown of the ranks of the approximately 2,000 enlisted U.S. Navy SEALs that are led by an additional 500 Navy SEAL officers.

This breakdown includes ranking insignia, abbreviation of ranking, overview of the role, and minimum monthly pay. It’s important to note that for each rank listed, we have listed the absolute minimum for what they earn in basic pay. Pay can be higher depending on years in service and various special pays such dive pay, and other skilled incentive pay.

First off, here’s a chart of Navy SEAL enlisted ranks:

Rank overview: Seaman is considered the entry level of the U.S. Navy SEALs and the third lowest ranking among enlisted in the USN.

Navy Seaman (E-3) are classified as apprentices that remain in training. Most of them are already part of Fleet at the time of training.

Fleet E-3s have already earned basic qualifications and understand how to navigate a ship. The experience and knowledge is helpful in this entry-level role, as well as future placement in higher rankings.

Fleet Seamen will have a number of different responsibilities within their Division. As they provide basic maintenance and watch, Navy Seamen also prepare for the role of Petty Officers.

Rank overview: By the time most members reach E-4 they have made it to Fleet. There are a few rare exceptions, but by now most are fully trained and prepared for general duties.

E-4s are the most junior of all Petty Officer ranks. Leadership and becoming self-sufficient are major priorities of this ranking.

Members are qualified to hold watch and may also conduct maintenance and repairs on certain equipment.

Skills continue to get enhanced in watch stations and maintenance. Mentoring is another big component of the role for junior Seamen and Petty Officers.

Leadership roles will continue to get expanded along with several important collateral duties. E-5s are attending advanced schools and starting work on supervisory qualifications.

First Class Petty Officers primarily oversee work and only execute the most difficult and complex tasks themselves.

Mentoring is a major part of their duty as they remain in charge of day-to-day operations. They receive consultation by a Chief Petty Officer (CPO).

Rank overview: Chief Petty Officers (E-7) are considered the heart of the “deckplate”, or ground-level leadership. The uniform resembles that of an officer, and thus are treated accordingly.

E-7s are very seasoned and knowledgeable. Their supervision includes supervision of all Petty Officers.

The training and mentoring of Junior Officers is the primary duty of E-7 Officers. The Officer and Chief work in close coordination during this training.

Each Chief represents his or her own Division or Department.

E-8s closely communicate with Department Heads as well as Chiefs.

Their primary responsibility is to train new Chiefs. E-8s are not nearly as present on the deckplate as E-7s.

Rank overview: Master Chiefs are the most seasoned members of the Chiefs Mess, or rankings E-7, E-8 and E-9.

Their voice is heavily considered in every discussion as they represent the largest department on the ship.

They are a walking and talking example for how the rest of the ship should conduct themselves. The example they establish is crucial.

Their role is part of a “Command Team” that also includes a CO and XO.

The position is the principal enlisted advisor to the Chief of Naval Operations.

The primary duties include addressing concerns and complaints of enlisted sailors throughout the Navy.

Related Article: How to Join the U.S. Navy

This breakdown includes the officer ranking insignia, abbreviation of ranking, overview of the role, and minimum monthly pay. As with enlisted ranks, it’s important to mention again that for each rank listed, we have given the absolute minimum for what they earn in basic pay. Pay can be higher depending on years in service and various special pays such dive pay, and other skilled incentive pay.

First off, here’s a chart of Navy SEAL officer ranks:

Rank overview: An Ensign (0-1) represents the lowest ranking officer in the United States Navy. The rank is held for two years until the Officer is promoted to O-2.

Ensigns have a variety of different roles. They spend time earning the respect of their crew during this two year phase.

Fleet Ensigns are traditionally assigned a Division. They may manage anywhere from five to 50 different personnel.

O-2s may have already spent several months in the Fleet, or may start shortly after being promoted.

The responsibilities of an O-2 increase with the promotion. They are usually in charge of more soldiers and duties are more complex.

Rank overview: Lieutenants in the U.S. Navy SEALs is different than the role in the Army, Marines, and Air Force where they represent O-1 or O-2.

The expectations for an O-3 is high and is expected to be fully warfare qualified by this point in time.

Lieutenants are the principal mentors of Junior Officers and provide much of the training as well as direction.

Rank overview: O-4s are usually referred to as Lieutenant Commanders. An LCDR handles what is called “billets”, or jobs that vary based on the community.

O-4s are professionals that are assigned based on equivalent years of experience, offering quicker advancement.

Rank overview: While an 0-5 in the Navy would generally command anything from a destroyer to a submarine, O-5’s in the SEAL teams will command a SEAL team.

Commanding Officers are usually referred to as “Skipper” or “Captain”. The latter of which is only used for sea-going Commanders.

O-5s are specialized professionals with equivalent years of experience, much like 0-4s.

Captains are assigned sea-going as well as shore-based roles. They are placed in varying political empowerment depending on their inherent “track” towards a flag position.

Overall planning and movement is a priority. They also oversee major shore-based commands too.

Rank overview: Rear Admirals (0-8) handle many of the same responsibilities as O-7s though with a greater emphasis.

They are usually stationed on a ship and are able to speak with Commanding Officers directly.

Rank overview: Vice Admirals are generally in charge of the highest Navy Commands. They also serve as deputies of Combatant or Geographic Commands.

Flag rank officers from any service may get selected for Joint Commands. An example of this would be AFRICOM.

Like O-9s, Admirals may get selected from any service for Joint Commands, such as the Chairman of the Joint Chiefs of Staff (CJCS).

Related Article: How to Make Sure Someone is a Navy SEAL

As before, we mentioned that the pay listed for each rank is the absolute minimum. The big factor to influence it would be time served in the Navy. An 03 that’s been in 6 years would make $6,128 in basic pay. Other factors to consider for an increase in pay would be SkIP, or Skill Incentive Pay for those that have been certified in parachute, dive, and/or demolition. This pay can range from $515 to $715 monthly whether one is deployed or not.

Senior Officers have more priority and higher ranking than Junior Officers, yet both still serve under the leadership of commissioned officers.

Junior Officers fill the lower ranks of units, usually answering to senior officers which help provide guidance and mentoring. The goal of Junior Officers is to progress to Senior Officers.

Based on the Navy SEAL ranks and pay, Flag Officers receive better benefits than Senior Officers. They are both high ranking positions, though Flag Officers are considered the most elite.

They receive the most pay of any Navy SEAL member and have incredibly diverse and important responsibilities. Senior Officers are important in their own right, serving as Division Heads and other important roles.

As you can see, the ranking structure of the US Navy SEALs is identical to the rest of the Navy as a whole.

This also applies to the Navy’s elite SEAL team as well, often referred to as DEVGRU, or by it’s moniker SEAL Team 6.

If you have any questions on any of this, feel free to leave a comment below! 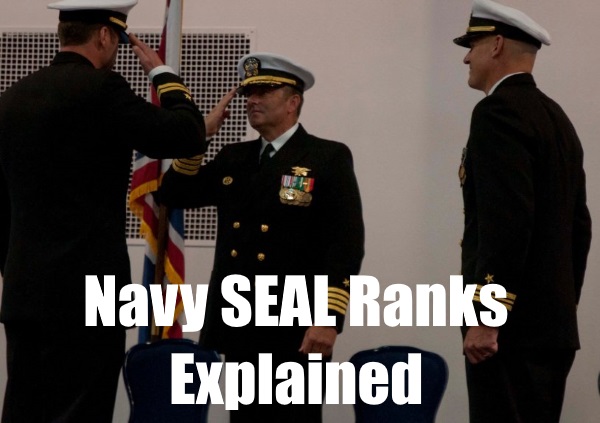 Learn more about the rank structure of US Navy SEALs, including enlisted and officers. Also includes info on the minimum base pay, and answers frequently asked questions.

One Reply to “Navy SEAL Ranks”