If you pay attention to the Navy, you may have heard the Sailor’s Creed and wondered what it means.

Those who make up the members of the Navy are unique and varied.

However, when you are a part of the Navy, you are more alike than you are different.

Also, the Navy has a goal of unifying its members, and the Sailor’s Creed helps accomplishes this goal.

Therefore, members of the Navy revised the Creed over many years, creating what every member of the Navy knows by heart.

Related Article – What to Bring to Navy Boot Camp

What is the Sailor’s Creed?

I am a United States Sailor.

I will support and defend the Constitution of the United States of America and I will obey the orders of those appointed over me.

I represent the fighting spirit of the Navy and those who have gone before me to defend freedom and democracy around the world.

I proudly serve my country’s Navy combat team with Honor, Courage and Commitment.

I am committed to excellence and the fair treatment of all.

History of the Sailor’s Creed

History is a vital part of any military organization.

Also, reciting the creed is one of the ways the Navy demonstrates its commitment to heritage and the core values of what it means to be a sailor.

In the Navy, sailors refer to the Sailor’s Creed as a guide for behavior.

Also, it shows allegiance to the values of the Navy.

The following is the original Sailor’s Creed.

I have chosen to serve in the United States Navy. America depends on my performance for her survival, and I accept the challenge to set my standards high, placing my country’s well-being above self-interest.

I will be loyal to my country, its Constitution and laws, and to my shipmates.

I will be honest in my personal and professional life and encourage my shipmates to do the same.

I will, to the best of my ability, do the right thing for its own sake, and I am prepared to face pain or death in defense of my country.

I will be a professional, wearing my uniform with pride and accepting responsibility for my actions.

I will set excellence as my standard and always strive for ways to make me a better sailor and my crew a better crew.

How the Creed Evolved

The Sailor’s Creed stems from an idea that Admiral James Watkins had in 1986. The Admiral was the Chief of Naval Operations, and he formed a group to create the Navy’s Code of Ethics.

At the end of the meeting, the members created a text called the Navy Uniform.

Therefore, the Blue Ribbon Recruit Training Panel revised the Creed, and it was revised again in 1994.

Although, the evolution of the Creed did not end there.

In 1997, Chief of Naval Operations Admiral Jeremy Boorda oversaw the change of the Creed one last time.

Also, the goal of the revisions was to ensure the Sailors Creed is inclusive for all those who serve in the Navy.

New recruits and those in officer training learn the Sailor’s Creed, and they recite it daily.

Related Article – Navy A School: A List Of All 24 Locations + Training Summary

What Does the Sailor’s Creed Mean?

The Sailor’s Creed teaches members of the Navy the values of respect, as well as honor and courage.

Also, the Creed is inclusive to all members of the Navy.

Therefore, it might have a different meaning depending upon who is reciting the Creed.

However, it is a statement that unifies the Navy as a whole, as it represents the essence of what it means to serve in the Navy.

By saying the Creed daily during recruit training, it reinforces the idea of upholding the integrity and mission of the Navy.

No matter the capacity in which you serve in the Navy, you will learn and recite the Sailor’s Creed daily during RDC.

Also, many sailors contributed to the Creed.

This Creed unifies all those enlisted in the Navy, and it builds and maintains morale. 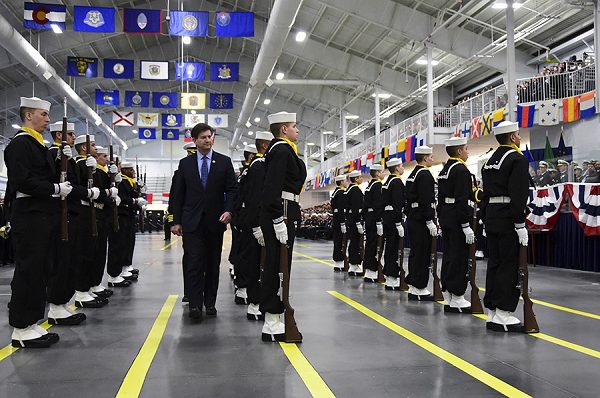