The U.S. Army is supporting the development of new weapons in the forms of rifles and automatic rifles for close combat forces.

This Next Generation Squad Weapon (NGSW) is intended to eventually replace the M4A1 carbine, M249 Squad Automatic Weapon, and the M240 machine gun.

The Army will reportedly select the rifle supplier among those in competition between August and October of this year.

Troops are expected to have NGSW rifles and ammunition by the end of 2022.

The Next Generation Squad Weapon (NGSW) Program is an effort to develop prototype rifles that would enhance operations and lethality in combat for military troops.

U.S. Army Infantry, Airborne Rangers, and Special Operations Forces are heading this program in anticipation of changing situational threats and methods of combat.

The NGSW program began after a U.S. Army Small Army Ammunition Configuration (SAAC) study in 2017, demonstrating the need for advanced technology in fire-control and bullet design.

As a result, the Army developed the NGSW program to acquire rifles, one with a 6.8 mm round and one with a fire-control system, through funding and three prototyping contracts to gun makers.

The purpose of the NGSW rifle and automatic rifle is to incorporate the following to increase performance:

For weapons and ammunition, these were the initial vendors: Sig Sauer, General Dynamics-OTS, and Textron Systems.

The two initial vendors for fire control were Vortex Optics and L3Harris.

Overall, the NGSW program is designed to benefit military soldiers by significantly increasing lethality and accuracy.

Initially, three weapon and ammunition vendors in addition to two fire control vendors were in competition to develop NGSW prototypes with the option for production based on performance.

General Dynamics turned their weapons design project over to LoneStar with collaboration by Beretta to manufacture parts.

Therefore, there is a partnership among LoneStar Future Weapons (True Velocity), General Dynamics, and Beretta in competition with Sig Sauer.

Both LoneStar Future Weapons and True Velocity Ammo are based in Texas.

Sig Sauer is known for manufacturing firearms to meet the needs of military, law enforcement, and commercial markets.

Sig Sauer is actually a member of a global business network of firearms manufacturers.

Here is information about the NGSW program requirements and its firearm candidates:

In 2018, the Army decided to implement an intermediate caliber round of 6.8 mm for the Next Generation Squad Weapon program.

This general-purpose ammunition falls between the 5.56 mm and 7.62 mm calibers currently used at the squad and platoon levels.

In addition, the 6.8 mm version outperforms both of the aforementioned calibers.

In addition to accommodating this common ammunition and utilizing Small Arms fire-control system, the rifles are required to accurately fire on targets 2,000 ft away.

The NGSW requirement for maximum length is 35 inches.

The maximum weight for the NGSWs, including attachments, is set at 12 lbs.

This is five pounds less than the M249 SAW and over 10 pounds lighter than the M240 machine gun.

Therefore, this ammunition and the new weapon systems will benefit soldiers in terms of improved accuracy, range, signature reduction, and lethality.

Innovations incorporated in the NGSW rifles will also allow for future expansion, adjustment, and advancement of these weapons.

This bullpup design features a compact platform with magazines loaded behind the trigger, a long barrel length, higher muzzle velocity, and increased range.

The NGSW-R and NGSW-AR are nearly identical in design, though the automatic rifle comes with a bipod.

The bullpup configuration reduces the overall length of the rifles and provides better balance.

However, these rifles also handle differently than the Army’s current weapons systems and would require training for troops to use effectively.

This removes the need for receiver extension and buffer tube.

It also features a 13-inch barrel and collapsing buttstock.

Ergonomically, this design is similar to the existing M4 carbine though it is heavier and has a strong recoil.

Sig Sauer’s NGSW-AR, the SIG LMG, is lighter than standard automatic rifles with a reduced recoil and easier control.

It is belt-fed with a side-loading design, which allows for optics to be mounted on the top of the weapon.

In addition, it has a quick-detachable suppressor and similar ergonomic controls to the M4.

#4. Candidates Removed From The NGSW Program

However, between September 2019 and November 2021, these vendors and their designs were dropped from the program.

Vendors underwent a first prototype test in the third fiscal quarter of 2020.

This test was designed to review and inform weapon and ammunition vendors in terms of their prototype performance.

In the second fiscal quarter of 2021, a second prototype test was conducted.

Vortex Optics and L3 Technologies also provided prototypes for weapons optics that include a ballistic computer.

This allows for future capacity to link with night vision devices and connect them with the weapon site for acquisition and engagement of targets.

The NGSW competition is now down to the Sig Sauer and GD/LoneStar/Beretta models.

The Sig Sauer NGSW-AR design is similar to the ergonomics of the existing assault rifle.

However, this lightweight, belt-fed machine gun is lighter than the M249 SAW and consists of features to minimize recoil.

In addition, the Sig Sauer NGSW-R resembles the ergonomic control of the M4 carbine, including the barrel length, collapsible buttstock, and short-stroke gas piston system.

GD/LoneStar/Beretta offers bullpup configuration in which the action (mechanism) and magazine are located behind the trigger.

However, the bullpup design allows for a compact platform with a longer barrel, higher velocity, and increased range.

The weapons put forth by both manufacturing teams have pros and cons.

One important element to consider is that the Army has never utilized weapons with bullpup design.

This means that soldiers and other service members would need training to become effective at using the GD/LoneStar/Beretta models.

Yet, the bullpup design is shorter in overall length with the magazine well behind the grip in the buttstock, and this type of weapon is common in some foreign militaries.

The Army plans to select the winner for the NGSW between August and October of 2022.

The NGSW program was established in 2017 to replace the M4 Carbine, M249 SAW, and M240 machine gun with rifles that use common 6.8 mm caliber cartridges and fire control systems.

These replacement rifles are intended to provide soldiers with higher caliber weapons and more effective ammunition during combat.

Though the NGSW competition between GD/LoneStar/Beretta and Sig Sauer will result in a supply contract for the winning manufacturer, these weapons can also be considered a win for service members.

The Army has recognized that its current weapons and calibers need improvement in their lethality, ergonomics, weight, signature-suppressing capability, and performance at range.

Therefore, the winning NGSW-R and NGSW-AR should allow soldiers and other service members more efficacy in performing missions.

NGSW weapons and ammunition are anticipated to be fielded to soldiers in close-combat forces by the end of 2022. 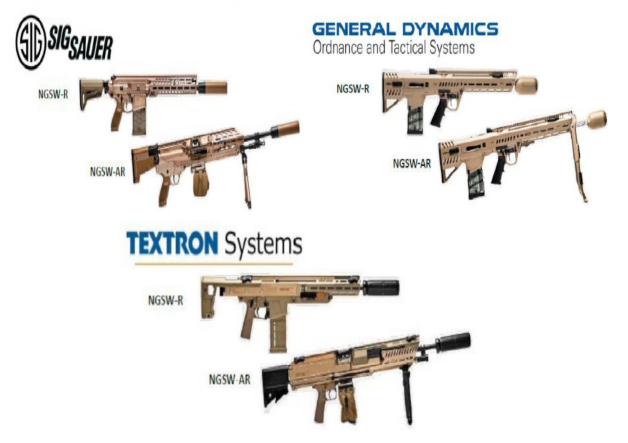 The Next Generation Squad Weapon (NGSW) is a program used by the US Military to find the next battle rifle used by US military personnel. Learn more about the program here.