In the United States Marine Corps, every Marine is a Rifleman and must go through the USMC Rifle Qualification test.

However, not all Marines go into the specialty of Infantry rifleman, but every single Marine has the same basic knowledge.

Marine recruits show up to boot camp with a wide variety of knowledge about weapons.

Some recruits are well-versed in handling weapons, while others never had the opportunity.

Fortunately, the Marines Corps train all Marines to meet the same level of expectations for combat.

What is the USMC Rifle Qualification?

What Happens If You Fail the Rifle Qualification in the USMC?

How Hard Is USMC Rifle Qualification?

What is the USMC Rifle Qualification?

Since the Marines focus on close combat and fire assaults, all members of the Marines must qualify with their rifle during the Marine Corps Rifle Qualification test.

This occurs during basic training to ensure every Marine possesses the capability of firing their weapon during battle conditions.

The targets are at 200, 300, and 500-yards, and the firing is a combination of rapid and slow fire in a variety of firing positions.

Marines are issued an M-16A2 during training, and this weapon becomes an extension of your person.

However, depending on your MOS, you may need to qualify in other weapons as your military career progresses.

You will know everything about your rifle, including memorizing the serial number.

These phases include the following:

Related Article – How To Prepare For Marine Corps Boot Camp

Before recruits fire their weapon, they must learn some essential skills.

You will learn how to take your rifle apart and put it back together again.

Also, you will learn to treat every weapon as though it were loaded.

Furthermore, you will learn to keep your finger off the trigger until it is time to fire, and to only point your rifle at something you plan to shoot.

Lastly, you will learn it is vital to keep the safety on until you plan to fire your rifle.

Once you are well acquainted with how your rifle works and safety standards, you begin to learn more.

Before firing a rifle, Marines must learn the basics of marksmanship.

This portion of marksmanship is Grass Week.

The Grass Week section of training is where Marines learn about their rifle and how to move into position.

For instance, Marines learn how to place the tip of the front sight into position to hit the target. This is called a sight picture.

Also, Marines learn how to control their breathing and trigger.

Furthermore, Marines learn how to maneuver into shooting positions such as prone, sitting, kneeling, and standing.

After this week, Marines retain the muscle memory necessary to snap into shooting positions quickly, which is essential to qualify.

The next phase is Firing Week, where Marines fire live rounds.

During this phase, Marines prepare their rifles and get ready for the ‘known-distance’ firing course.

There are three levels of scoring in the Marine Corps into which recruits fall.

Also, Marines earn a marksmanship badge to celebrate their score.

A marksman is the lowest score possible to qualify still, and the scoring range is 250-279.

A sharpshooter is the next level of expertise.

The highest level of expertise in marksmanship is Expert.

There are two different qualification tables.

You will fire 50 rounds at three different targets.

The points range from a miss, which is zero points, to a 5.

The first target is four by six feet, and you will slow fire at both the 200 and the 300-yards in the positions you learned during Grass Week.

After, you move on to a six by six-foot target and use rapid-fire at both the 200- and 300-yard lines in two different firing positions.

Lastly, you fire another target the same size as before from 500 yards while in the prone position.

This last target in Table 1 is a slow fire round.

Table 2 of the USMC Rifle Qualification revolves around combat marksmanship.

For this table, there are 50 rounds with a total maximum of 100 points.

If you miss, you receive zero points.

However, if you hit the pelvis area up to the head, you receive two points.

If you miss these areas, but you still hit the target, you earn one point.

What Happens If You Fail the Rifle Qualification in the USMC?

Those who are unable to qualify for the Marine Corps rifle qualification test receive additional training.

The Marine Corps has a remedial marksmanship platoon for additional training to pass the qualification.

How Hard Is USMC Rifle Qualification?

You need to qualify with your rifle to proceed with boot camp to graduate with your platoon.

Therefore, failing your qualification round will result in delaying your progress.

There are no firm numbers on failure rates, but the average boot camp recycle rate ranges up to 15% each year.

Of that percentage, some are due to failure to qualify with their rifle.

Fortunately, there is an opportunity for retraining in that area.

Those who have gone through weapons qualification training note the Marine’s rifle training is longer and more intense compared to the Army’s basic rifle training.

Essentially, a soldier in the Army would have to score on the very high end to qualify at the same marksmanship level as a Marine.

Although, the Army rifle qualification is more combat orientated with pop-up targets and other details that simulate combat situations.

To be fair, this comparison is limited to basic rifle qualifications.

Therefore, those who serve in an infantry MOS in either branch will have different standards and expectations of which to meet.

The Marine Corps expects every Marine to qualify in their service weapon.

This culture begins in boot camp, where Marines learn everything about their rifle and firing safety.

Marines continue their training by learning how to maneuver into shooting positions until the movements are natural.

Once completing all preliminary training, recruits train with live fire.

All this training leads up to the qualifying day.

Recruits receive scores under two different tables, and these scores lead to varying levels of marksmanship.

If a recruit does not pass, they attend remedial training in marksmanship.

Once a recruit passes their qualification, they are officially a Marine. 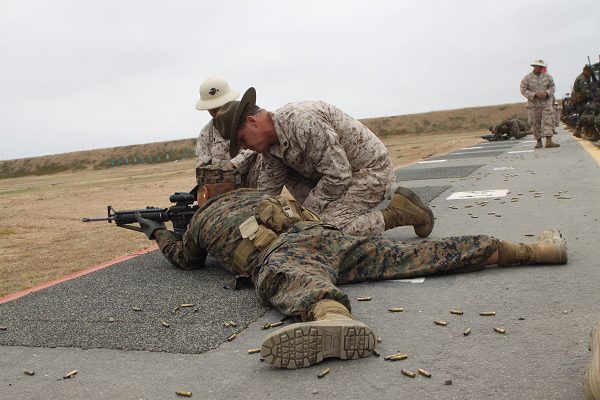 Learn more about the USMC Rifle Qualification test, including details on all 3 phases, and the differences between Marksman, Sharpshooters, and Expert.