Recruits in Army boot camp must successfully make it through Army rifle qualification.

Also, soldiers currently in the Army must qualify with their assigned service weapons each year.

When soldiers qualify on their service weapons, they demonstrate they can make fast decisions while engaging targets.

What is the US Army Rifle Qualification?

What is the US Army Rifle Qualification?

The goal of the Army is to prepare and train soldiers to be ready and lethal for combat situations.

The M16A2 is a standard rifle for military branches.

In some situations, Army recruits might qualify with an M-4, instead, especially if they are in infantry training.

Also, soldiers need to qualify with all the weapons assigned to them based on their individual MOS, or job, in the Army.

The Army qualification courses are located at local firing ranges on Army bases.

The Army has training ranges designed for weapons qualification and training.

Six levels of training accumulate so a soldier can show proficiency during qualifications at the end.

These include the following:

In this very first phase, Soldiers show they understand their assigned weapon.

A soldier faces evaluation based on the functions of their weapon, as well as safety operations.

Also, soldiers will show they can take their assigned weapon apart and put it back together again.

This phase of the training does not include live fire, and it is a hands-on learning situation where a solider learns everything about the mechanics of their weapon.

The following are the areas in which a soldier receives training:

During simulation training, a soldier applies their new knowledge in a simulation environment.

Also, this phase of training is meant to simulate the actual qualification soldiers will experience at the end of the training.

Furthermore, soldiers must show they can perform during the simulation before proceeding in training.

The simulation training reinforces the following, which was explicitly taught in the first phase:

For the drills section of the training, soldiers are in a live environment and experience hands-on training.

Also, this training is a chance for soldiers to practice tasks using their weapons in both the day and night.

During training, soldiers experience new training in the following areas:

Also, all the skills taught in the first phase and reinforced in the second continue reinforcement in this third phase.

The basic phase of training is a live fire course where soldiers use training ammunition.

Also, at this phase of training, soldiers practice their skills at a slower pace to ensure mastery.

Everything done at this stage of training is taking all the learning done so far and putting into practice in a live-fire environment.

By the time a soldier gets to the practice portion of training, they are still in a live fire environment.

However, the skills and moves put into place at a slower tempo from the previous training start to pick up.

Essentially, soldiers can expect to perform more repetitions and have a quicker and more immediate action during their drills.

All this work and increase in skills are preparing soldiers for the final part of this experience.

Furthermore, this part of the training is not required, but it is helpful to build critical skills.

This phase of training gives soldiers their opportunity to display their proficiency in using their assigned weapon and equipment.

The conditions of this training are live fire with training ammunition.

For soldiers qualifying with an M4 or an M16A2, there are minimum standards to meet to qualify with their weapon.

There are 40 targets in total.

Soldiers will engage with these targets from multiple positions.

These positions include standing, then going to an unsupported prone position.

Next, soldiers will be in a supported prone and move to a kneeling and supported position.

Lastly, soldiers are standing and supported while firing.

Furthermore, the targets are sized so they are scaled to what something would realistically look like from their distance.

Soldiers must hit at least 36 targets to meet the standards for an expert shooter.

To qualify as a sharpshooter, soldiers must hit from 30 to 35 targets.

To meet the minimum expectations for the marksman, a soldier must hit between 23 to 29 targets.

For those who do not meet the minimum of 23, they are considered ‘unqualified.’

We gathered some frequently asked questions and answered them here.

How Does the New Rifle Qualification Differ from the Old One?

The new qualification has the same score requirements, but it has many differences.

For instance, the new qualification is more difficult.

However, despite its difficulty, it is more realistic for combat situations because it has more position changes, engaging targets, and changing of ammunition magazines.

How Hard Is It to Shoot Expert in the Army?

Soldiers tend to report most soldiers pass the basic rifle marksmanship, but only 20 percent qualify as expert.

However, that number changes from year to year.

It is essential to note qualifying as expert is not the same as being a sniper, as the two have different courses and qualifications.

How Far Does the Army Shoot?

Soldiers fire at 40 different pop-up targets from a variety of firing positions.

These targets are placed at 25 meters for both grouping and zeroing measures.

Grouping is a series of shots while zeroing is adjusting the weapon’s sites.

Also, targets are at 50-meter increments up to 300 meters.

The target and target distances change depending on the service weapon.

What Happens If I Fail the Rifle Qualification Test?

If a recruit in boot camp fails to qualify with their service weapon, they are pushed into a new group to go through training again.

If it is a yearly reoccurring weapons qualification, a soldier will retrain to pass.

However, the Army’s qualification course is much more suited to simulate what happens to soldiers in combat situations.

This comparison relates to basic rifle qualifications because each branch has different MOSs with different weapons and expectations.

The Army recently changed their rifle qualification course to better meet the needs of soldiers.

Soldiers practice with the weapons assigned to them according to their job in the Army.

There are six phases of training.

Training begins with learning about their service weapons.

After, soldiers build skills with their weapons to prepare them for the live round qualification test at the end of the training.

If soldiers do not pass and qualify with their weapons, they can retrain and try again. 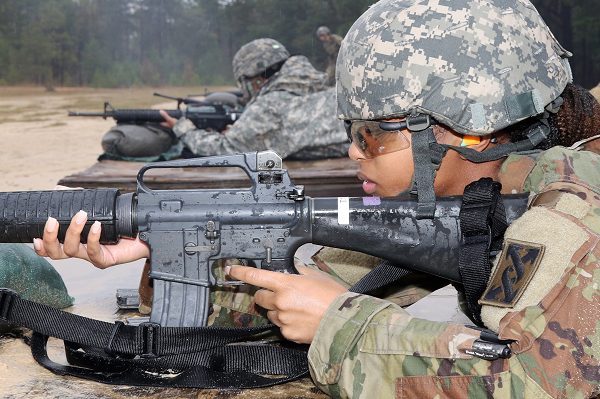 Find out more about the Army rifle qualification test, including the standards, how the test is conducted, and the differences between expert, marksman, and sharpshooter.