Joining the U.S. military can provide people with incredible opportunities, whether they make it a 20-year career or serve just a minimum amount of time.

Each branch of the Armed Forces offers specialized training, medical and education benefits, housing, and many other privileges for its active members.

However, not everyone is well-suited to join the military, and it is a decision that should not be taken lightly.

Here are 10 reasons to NOT join the military, for your consideration.

Related Article – Which Branch Of The Military Should You Join?

10. History of Hard Drug Use or Addiction and/or Alcohol Dependence

All branches of the military require initial screenings for drug and alcohol abuse through direct questions and physical tests.

It is important to be honest with your recruiter from the beginning.

This means disclosing any history of drug and alcohol use and/or dependency and addiction.

Any current or history of dependency, either physically or psychologically, on drugs and/or alcohol can affect your eligibility to join the military.

In some cases, such as experimental or recreational use of “soft” drugs like marijuana, certain branches of the military may be more lenient.

However, if you have experience with hard drugs such as cocaine or heroin, or any selling or trafficking of drugs, this will be a definite barrier to joining the Armed Forces.

The U.S. military does not condone or tolerate any illegal or improper use of drugs or alcohol.

This policy is not just to limit the potential for criminal charges among service members.

It also discourages the effects of drugs and alcohol on physical and mental health.

Any substance abuse or dependency can lead to serious risks for both military and civilian populations.

If you are committed to certain types of body art such as tattoos, piercings, ear gauges, etc., joining the Armed Forces is probably not for you.

On fact, it’s one of the reasons to not join the military that’s completely outside of your control.

The military has relaxed its policy in terms of tattoos, though each branch has its own regulations.

However, any tattoos that reflect discriminatory or extremist material, or those that demonstrate offensive content or affiliation, are prohibited among service members.

In general, service members are also prohibited from most visible body piercings.

Women, however, are allowed to wear one pair of simple earrings in most cases.

All branches of the U.S. military take pride in upholding standards and policies related to professional appearance.

Therefore, any body art that does not reflect such standards, from nose piercings to ear gauges, will disqualify you from joining.

8. Opposed to Taking or Following Orders

All U.S. Armed Forces operate on a system known as chain of command, based on a person’s rank.

This means that every service member, enlisted or officer, holds a rank.

This rank indicates their position in the chain of command.

Of course, the higher your rank, the more leadership roles and responsibilities you will likely have.

However, in each service branch, every individual answers to someone in terms of taking and following orders.

Taking and following orders is essential to mission success in the military as well as protecting the lives of fellow service members.

Even the highest-ranking officials in the military answer to the president as Commander in Chief.

Therefore, if you are opposed to taking or following orders from those in leadership or authority positions, joining the military is not a wise option.

The structure of the U.S. military is founded in service members working together.

Those who join are part of smaller units, such as platoons or squads.

These smaller units make up increasingly larger units from companies to battalions to brigades, and so on.

The success of any mission and/or unit is based on individual troops working collectively in service to the larger, cohesive group and its goals.

Because of this, soldiers, sailors, airmen, and Marines must be dedicated to their comrades in a manner that goes beyond working effectively together.

If you prefer to work independently and/or have trouble working with others, it’s best to avoid joining the military.

There is no doubt that joining the U.S. military means that you will relocate—often several times.

Each branch holds different posts and/or bases throughout the globe where service members (and often their families) are stationed.

The likelihood of being stationed near your home is very low.

In addition, service members are often relocated every one to three years.

This means that they don’t live in the same place for very long before having to move again.

Deployments are an added factor in terms of temporarily having to relocate to another country or sea to face combat and/or other hardships.

Such frequent or drastic relocation can prove difficult for military personnel and their families.

If you are unwilling to relocate, possibly several times, a military career is not for you.

Related Article – Biggest Military Bases In The US

To join any branch of the U.S. military, you must pass a physical exam, including height and weight measurements.

Basic training, across all branches, consists of demanding exercises and tests of physical fitness.

Once a recruit decides to join the military, they will be subject to meeting physical requirements and fitness standards set forth by their branch.

This policy is in effect for the remainder of their active service.

Therefore, if you are not committed to intense, daily physical fitness or if you are resistant to maintaining such standards, joining the military is not advisable.

4. Cannot Spend Time Away from Family or Loved Ones

One of the biggest reasons to not join the military is the fact that you’ll be away from your family for long periods of time.

Time spent away from family or loved ones is guaranteed for those who serve in the military.

This time away may be due to extremely long workdays, including 24-hour shifts and holiday working hours.

Other factors that keep service members away from home include:

Though military personnel are able to accrue “leave,” meaning vacation days, they must obtain approval before they can take any time off.

This devotion to duty and time away can be difficult and stressful in terms of spousal relationships, parenting, friendships, and family togetherness.

Therefore, if you are not able to commit to spending time away from your family or loved ones, then you should not join the military.

The civilian job market is based on “at-will” employment.

This means that employers have the right to legally terminate an employee.

In addition, an employee can leave their job at any time for whatever reason, or no reason at all, without facing legal consequences.

Unlike the civilian world, you cannot expect at-will employment in the military.

Service members cannot simply quit or walk away from their job.

They are contractually and morally obligated to fulfill their signed and stated commitment to the U.S. government.

Of course, once your commitment is fulfilled, you are not obligated to re-enlist or serve more time.

In addition, you can be discharged from duty by your service branch for several reasons.

Among others factors, you may be discharged if you are found to be incapable of physically or psychologically performing your duties.

Service members that receive a dishonorable discharge, for whatever reason, lose all veteran benefits and can face barriers when applying to civilian jobs.

Even worse, for those who go AWOL (absent without leave) or desert the military, the consequences can be severe.

This may include loss of pay and rank, dishonorable discharge, and even jail time.

Since the military is not based on at-will employment, those who join must be absolutely sure that they can fulfill their commitment to service.

2. Aversion to Risk or Danger

Another one of the reasons to not join the military is the potential for danger.

Though many jobs in the civilian world present levels of risk and danger, these levels are higher for those who join the military.

There is some occupational cost within each branch of the U.S. Armed Forces in terms of physical, psychological, and emotional well-being.

This is true for military families as well as veterans.

However, service members are at a much higher risk of long-term effects due to the dangerous nature of being in the military.

This is especially true during times of war, deployments, and those facing combat as well as other serious hazards.

Many veterans experience long-term disabilities due to physical and psychological injuries sustained during their service.

These disabilities can have a devastating impact on a person’s quality of life.

This is likely to impact relationships, mental and physical health, and the ability to transition to a life and career in the civilian world.

Therefore, if you have an aversion to risk or danger, you should not pursue military service.

People join the military for many reasons.

They may have been raised with one or more military parents and appreciate the military lifestyle.

Or, perhaps there is a strong tradition of military service in their family and they feel called to join.

Other people pursue military service for the benefits of training, education, health care, travel, and even job security.

However, the most important reason to not join the military is if you don’t want to join.

Some people may feel pressured to enlist, either by family members, teachers, recruiters, or even friends.

In addition, joining the military might seem like a good decision for those who feel out of place and unsure about going to college or getting an entry-level job.

However, serving in any branch of the Armed Forces, at any level, requires unique commitment, dedication, discipline, and courage—unlike any civilian job experience.

If you don’t have a sincere desire to become a soldier, sailor, airman, or Marine, along with all this position and lifestyle entails, you absolutely should not join the military. 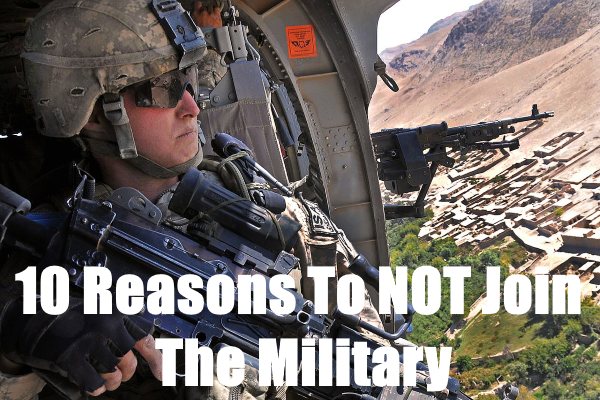 Is The Military Worth It

Is the military worth it? Yes, and in some cases no. Learn more about the 10 reasons why you should NOT join the military.